The program is jointly administered by the Center for the Advancement of Science in Space (CASIS) and the National Science Foundation (NSF).

NSF will award $1.5 million total in funding for the selected projects to advance fundamental science and engineering knowledge through microgravity inquiry.

Furst’s project, “Kinetics of Nanoparticle Self-Assembly in Directing Fields,” will use facilities onboard the space station (ISS) to study the assembly of ellipsoidal magnetic particles in the presence of a controlled magnetic field.

A professor in UD’s Department of Chemical and Biomolecular Engineering, Furst is particularly interested in colloidal materials — mixtures in which small particles called colloids are uniformly distributed throughout another substance. These materials range from common household items like mayonnaise, jelly and paint to high-tech applications in medicine, photovoltaics and communications. 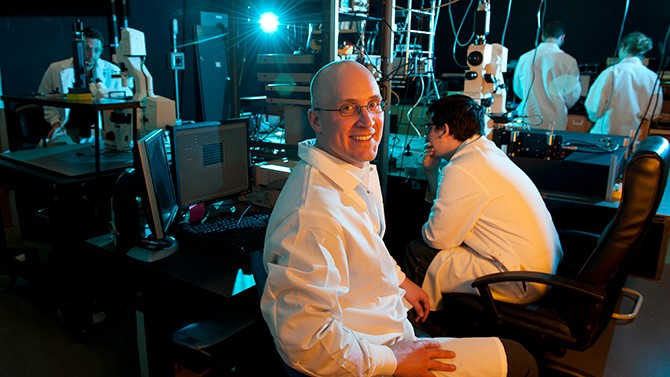 “The number of functional materials manufactured by assembly of colloidal particles is growing,” says Furst. “With this work, we will be controlling assembly by applying external fields that affect the motion of the particles and their organization.”

“Functional materials are fascinating because their mission is to perform in a certain way while basically remaining invisible,” he says. “The cool part for me as a scientist and engineer is revealing that magic to people, but the science behind it can be hard to explain.”

Furst says that some of the simplest “smart materials” are those that flow on demand.

“These materials have what’s known as yield stress,” he says. “It’s what keeps toothpaste on our toothbrushes and ketchup on our fries.”

The colloidal materials examined in this project could serve as building blocks for phononic bandgap materials that control the propagation of sound and heat, ultra-low thermal conductivity coatings, and photonic crystals with rich structural color.

In announcing the awards, NSF’s Grace Wang said, “In the microgravity environment of space, NSF grantees will be able to investigate fluid dynamics phenomena and processes not observable on Earth to further our scientific understanding that will lead to advances to benefit all Americans.”

Furst’s initial ISS research, performed starting in 2009, has appeared in the Proceedings of the National Academy of Sciences and Physical Review Letters, for which he was awarded the NASA Exceptional Scientific Achievement Medal in 2014.

Through the new grant, Furst plans to engage the public by producing segments for a variety of media outlets, especially those that concentrate on space-based research.

Other institutions that received awards through the program were Rensselaer Polytech Institute, Cornell University, and the University of California-Santa Barbara.

About the Center for the Advancement of Science in Space

CASIS was selected by NASA in July 2011 to maximize use of the International Space Station (ISS) U.S. National Laboratory through 2020. CASIS is dedicated to supporting and accelerating innovations and new discoveries that will enhance the health and wellbeing of people and our planet.

About the ISS National Laboratory

In 2005, Congress designated the U.S. portion of the International Space Station as the nation’s newest national laboratory to maximize its use for improving life on Earth, promoting collaboration among diverse users, and advancing STEM (science, technology, engineering and mathematics) education. This unique laboratory environment is available for use by other U.S. government agencies and by academic and private institutions, providing access to the permanent microgravity setting, vantage point in low Earth orbit, and varied environments of space.