Searching for Cosmic Accelerators via IceCube

In our universe there are particle accelerators 40 million times more powerful than the Large Hadron Collider (LHC) at CERN. Scientists don’t know what these cosmic accelerators are or where they are located, but new results being reported from “IceCube,” the neutrino observatory buried at the South Pole, may show the way. These new results should also erase any doubts as to IceCube’s ability to deliver on its promise.

“The IceCube Collaboration has announced the observation of 28 extremely high energy events that constitute the first solid evidence for astrophysical neutrinos from outside our solar system,” says Spencer Klein, a senior scientist with Lawrence Berkeley National Laboratory (Berkeley Lab) and a long-time member of the IceCube Collaboration. “These 28 events include two of the highest energy neutrinos ever reported, which have been named Bert and Ernie.”

The new results from IceCube, which were published in the journal Science, provide experimental confirmation that somewhere in the universe, something is accelerating particles to energies above 50 trillion electron volts (TeV) and, in the cases of Bert and Ernie, exceeding one quadrillion electron volts (PeV). By comparison, the LHC accelerates protons to approximately four TeV in each of its beams. While not telling scientists what cosmic accelerators are or where they’re located, the IceCube results do provide scientists with a compass that can help guide them to the answers. 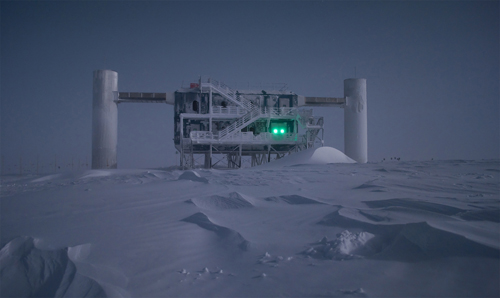 IceCube is a neutrino observatory whose detectors are buried more than a mile below the surface of the South Pole. (Photo by Emanuel Jacobi of the National Science Foundation)

Cosmic accelerators have announced their presence through the rare ultra-high energy version of cosmic rays, which, despite the name, are electrically-charged particles, mostly protons but also some heavier atomic nuclei like iron. It is known that ultra-high energy cosmic rays originate from beyond our solar system but the electrical charge they carry bends their flight paths as they pass through interstellar magnetic fields, making it impossible to determine where in the universe they came from. However as cosmic ray protons and nuclei are accelerated, they interact with gas and light, resulting in the emission of neutrinos with energies proportional to the energies of the cosmic rays that produced them. Electrically neutral and nearly massless, neutrinos are like phantoms that travel through space in a straight line from their point of origin, passing through virtually everything in their path without being impacted. 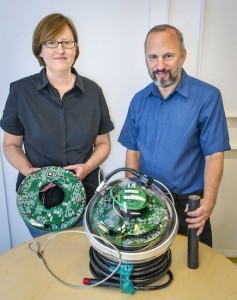 “The only way neutrinos interact is through the weak nuclear force, so they aren’t deflected by magnetic fields in flight, and they easily slip through dense matter like stars that would stop the cosmic rays themselves,” Klein says. “These same qualities that make neutrinos valuable observational tools also make neutrinos a challenge to study.”

The IceCube observatory consists of 5,160 basketball-sized light detectors called Digital Optical Modules (DOMs), which were conceived and largely designed at Berkeley Lab. The DOMS are suspended along 86 strings that are embedded in a cubic kilometer of clear ice starting one and a half kilometers beneath the Antarctic surface. Out of the trillions of neutrinos that pass through the ice each day, a couple of hundred will collide with oxygen nuclei, yielding the blue light of Cherenkov radiation that IceCube’s DOMs detect.

“Each of IceCube’s DOMs was designed to be a mini-computer server that you can log onto and download data from, or upload software to,” says Robert Stokstad, a senior scientist with Berkeley Lab’s Nuclear Science Division who led the development of the DOMs and was one of the original proponents of IceCube. “It is rewarding to see how well they are performing.”

The 28 high-energy neutrinos reported in Science by the IceCube Collaboration were found in data collected from May 2010 to May 2012. In analyzing more recent data, Berkeley Lab’s Lisa Gerhardt discovered another event that was almost double the energy of Bert and Ernie. Dubbed “Big Bird,” this new event was presented by Klein at the International Cosmic-Ray Conference.

“Like most scientific discoveries, finding Big Bird was a combination of hard work and luck and it took place on the afternoon of my last day of work on IceCube,” Gerhardt says, who at the time of her discovery was with Berkeley Lab’s Nuclear Science Division and is now with the National Energy Research Scientific Computing Center (NERSC), where the supercomputing resources are being used to sift out neutrino signals from cosmic noise in the IceCube observations.

“At first I was in disbelief, thinking there must be some other explanation for this enormous event,” Gerhardt says. “However,  one-by-one alternate explanations were disproved until finally we knew that we had found the most energetic event in IceCube yet, most likely from an astrophysical neutrino. I was able to leave IceCube with a bang!”

As to the identity of the mysterious cosmic accelerators, Klein thinks these early results from IceCube favor active galactic nuclei, the enormous particle jets ejected by a black hole after it swallows a star.

“The 28 events being reported are diffuse and do not point back to a source,” Klein says, “but the big picture tends to suggest active galactic nuclei as the leading contender with the second leading contender being something we haven’t even thought of yet.”

The IceCube Collaboration currently consists of more than 200 researchers representing 39 institutions from 11 different countries, including Berkeley Lab. The collaboration is led by the University of Wisconsin-Madison and largely funded through the National Science Foundation. The collaboration’s paper in Science is titled “Evidence for High-Energy Extraterrestrial Neutrinos at the IceCube Detector.”

“After seeing hundreds of thousands of atmospheric neutrinos, we have found something different,” says Francis Halzen, principal investigator of IceCube and the Hilldale and Gregory Breit Distinguished Professor of Physics at the University of Wisconsin–Madison.“It is gratifying to finally see what we have been looking for. This is the dawn of a new age of astronomy.”

For more about the IceCube Collaboration go here