Sea lampreys turning up the heat

Male sea lampreys may not be the best-looking creatures swimming in our lakes and streams, but they apparently have something going for them that the ladies may find irresistible.

Research by a team of Michigan State University scientists found that the males have a secondary sex characteristic that creates heat when they get near a female lamprey, something the females find hard to say no to.

The work of the team focused on a small bump located near the male’s anterior dorsal fin. Close examination of this bump determined that it was full of fat cells, cells that are similar to ones found in mammals, animals that need to maintain their own body temperature.

By putting a probe into the bump, the researchers found that the temperature of the bump, also known as rope tissue, increased by 0.3 degrees Celsius when the male approached a female, sometimes even more, depending upon the female.

The role this “bump” played in spawning was not known until now. Scientists had thought it merely as ornamental or playing some other minor role. 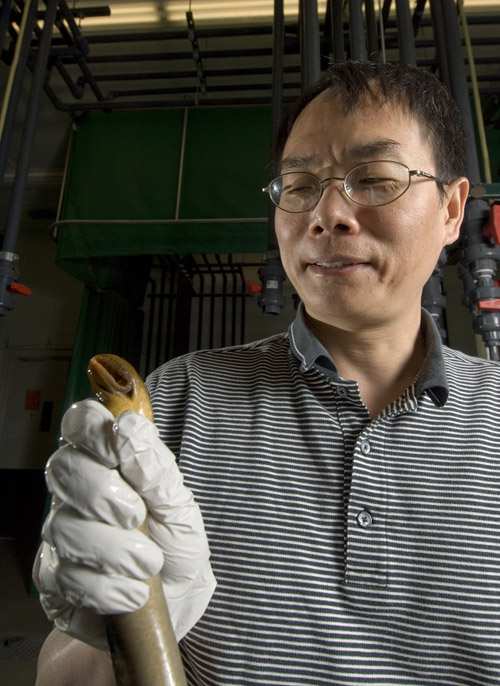 Fisheries and wildlife professor Weiming Li holds a sea lamprey. Li and his team are studying the reproductive habits of the invasive species, hoping to come up with ways to reduce or eliminate it from the Great Lakes. Photo by Kurt Stepnitz.

“We thought it was just a structure that was used for some kind of mechanical stimulation that they needed to trigger the female to lay eggs,” said Weiming Li, a professor of fisheries and wildlife and a team member.

Until now it was believed that males attracted females by releasing pheromones.

By attempting to better understand the reproductive biology of the sea lamprey, the researchers hope to find ways to reduce its numbers or eliminate it from the Great Lakes.

Sea lampreys are a very destructive invasive species. Resembling 18-inch eels, they can live in both salt and fresh water and likely found their way into the Great Lakes via shipping channels. They have no natural predators in the Great Lakes.

Parasitic lampreys attach themselves to other fish, such as salmon, trout and whitefish, and suck out the fish’s body fluids. The lamprey’s sucking disk and sharp teeth scar the host fish, killing many of them. Under some conditions, only one of seven fish attacked by a sea lamprey will survive. 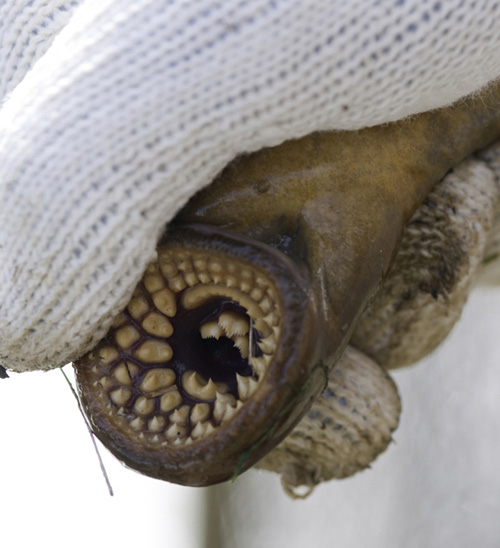 Sea lampreys use their sharp teeth to attach themselves to their prey. A team of MSU scientists is looking for ways to reduce or eliminate the invasive species from the Great Lakes. Photo by Kurt Stepnitz.

A sea lamprey can kill 40 or more pounds of fish, and they’ve caused the extinction of three species of whitefish in the Great Lakes. The U.S. and Canadian governments together spend about $10 million to $15 million per year on lamprey control. 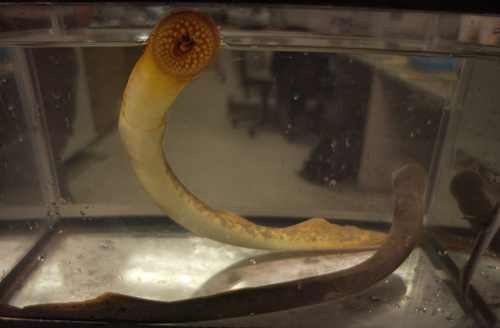 Sea lampreys are a very destructive invasive species. Their presence in the Great Lakes has significantly reduced the numbers of many species of fish, including whitefish. Photo by Daymon J. Hartley.

This latest research is published in the Journal of Experimental Biology.