EAST LANSING, Mich. — A repellant for sea lampreys could be the key to better controlling one of the most destructive invasive species in the Great Lakes, says a Michigan State University researcher.

Scientists have seen the effect alarm cues have on lampreys. When scents from dead sea lampreys are poured into a tank of live ones, the lampreys’ efforts to escape are dramatic. In the past, these reactions were simply dismissed as novel. But Michael Wagner, MSU assistant professor of fisheries and wildlife, sees this reaction as a potential game changer.

“Sea lampreys are one of the most costly and destructive Great Lakes’ invaders,” said Wagner, who published his results in the current issue of the Canadian Journal of Fisheries and Aquatic Sciences. “The effectiveness of the odor combined with the ease in which it’s obtained suggests that it will prove quite useful in controlling sea lampreys in the Great Lakes.” 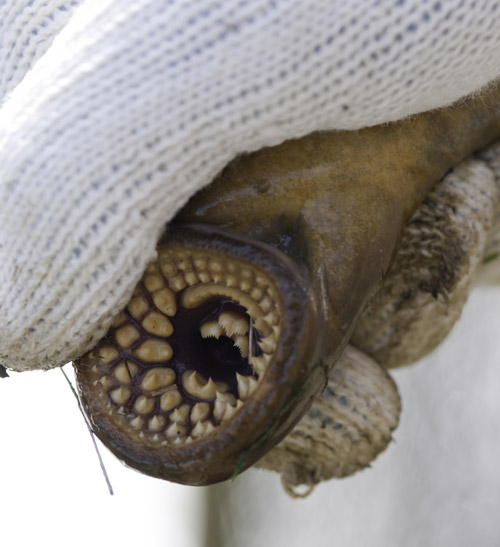 Michael Wagner, MSU fisheries and wildlife, has found a repellant that is a potential game-changer in managing sea lamprey. Photo by Kurt Stepnitz

Scientists had proven that the destructive species rely on the odor emitted by past generations of larvae to navigate into streams with suitable spawning grounds. Upon arrival, another odor emitted by mature males lures females onto nests to complete spawning. Based on these observations, existing research has fully focused on using pheromones to attract sea lampreys into traps. Once caged, they are destroyed or sterilized and released back into the wild so they can be tracked but cannot reproduce.

But with many scent and environmental cues in natural waterways, using pheromones to attract sea lampreys doesn’t always work. On the other hand, repellants – even in miniscule amounts – may prove to be much more effective in diverting and corralling them, said Wagner, who is also an MSU AgBioResearch scientist.

“It’s kind of like a stop light, a noxious odor that causes them to run away from its source,” he said. “By blocking certain streams with these chemical dams, sea lampreys can be steered away from environmentally sensitive areas and into waterways where pesticides could be used more effectively to eliminate a larger, more concentrated population of sea lampreys.” 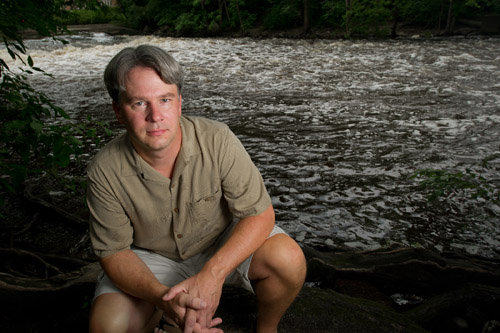 Michael Wagner, MSU fisheries and wildlife, has found a way to use repellants to control sea lampreys. Photo courtesy of G.L. Kohuth

This approach would allow agencies that control invasive species to save money, use less pesticide and manage other resources more efficiently to have a bigger impact on controlling the invasive species, Wagner added.

“Thanks to this exciting new research on alarm substances, we believe we are on track to bring sea lamprey control to a whole new level,” said Robert Lambe, chairperson of the Great Lakes Fishery Commission.

Wagner is continuing his research to isolate the exact chemical compound that causes the alarm. His work is supported by MSU’s AgBioResearch and the Great Lakes Fishery Commission.