Scientists unravel the genetic secrets of nature’s master of mimicry

Scientists investigating how one of the greatest shape shifters in the natural world is able to trick predators to avoid being eaten have identified the gene behind the fascinating feat.

The African Swallowtail butterfly, also known as the ‘Mocker Swallowtail’ or the ‘Flying Handkerchief,’ can appear to change both colour and shape.

Males of the species fly boldly around the tree tops, their rapid flight making them look like shaking handkerchiefs, however females lurk in the bushes and pretend to be examples of Monarch butterflies that are nasty to eat. 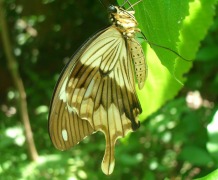 The study uncovered the master mimicry switch gene which allows Mockers to transform themselves. Image credit: University of Exeter

The females mimic different Monarchs in different parts of Africa and how they do this has long been a mystery. In an international collaboration involving scientists from the Natural History Museum, Imperial College London, the University of Cambridge and researchers in Nairobi, Paris and Jena in Germany, The University of Exeter’s Professor Richard ffrench-Constant has helped solve the genetic switch that allows female swallowtails to look like different Monarch butterflies and thus avoid being eaten.

“This mimicry is not just a simple change of colour and pattern”, says Prof ffrench-Constant, “but the females also lose their characteristic swallow tails and even fly slowly like Monarch butterflies”.

This unique combination of shape-shifting makes the mimicry more convincing for predatory birds and once they learn to avoid one warning pattern, they will then avoid similar looking butterflies.

Dr Martijn Timmermans of Imperial College London, who led the study, said: “The wings of the Mocker Swallowtails have bewildered biologists for almost a century. By pinpointing the switch, we have revealed a unique mechanism. It is really exciting to show that all this diversity is determined by variation in just a single gene.”

The genetic switch appears to be the gene called ‘engrailed’,  a gene previously shown to be important in patterning the early embryo of fruit flies. The engrailed gene belongs to a family of genes called transcription factors that switch on networks of genes responsible for all aspects of development.

Previously the engrailed gene has been shown to be important in setting up patterning in developing fruit fly embryos, however, nature seems to have redeployed this gene into much later patterning – the patterning of a butterfly wing. This allows the engrailed gene to function both early in embryo development and then later as a master mimicry switch gene by changing the colour and shape of the butterflies wing.

“We still have a lot to learn” adds ffrench-Constant, “we don’t really understand how this gene can control such a wide range of characteristics and how this mimicry is limited only to the female of the species. However, such questions are bound to provide significant challenges for the team in the future.”

Richard ffrench-Constant is a Professor of Molecular Natural History based at the Centre for Ecology and Conservation at the University of Exeter’s Penryn Campus in Cornwall.