*History of influence of industrial revolution hidden in glacial ice*

New clues about how Earth’s remote ecosystems have been influenced by the industrial revolution have been uncovered. Until now they were locked away, frozen in the ice of glaciers.

So say scientist Aron Stubbins of the Skidaway Institute of Oceanography and colleagues.

They published results of their study in the March, 2012, issue of the journal Nature Geoscience. It shows that everything flows downhill, eventually.

The research was funded by the National Science Foundation (NSF). 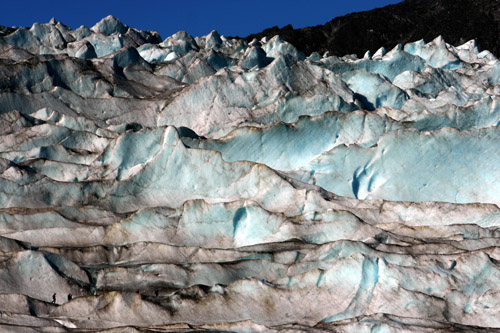 The key to the process is carbon-containing dissolved organic matter (DOM) in glacial ice.

Glaciers provide large amounts of carbon to downstream ecosystems. Many scientists believe the source of this carbon lies in ancient forests and peatlands overrun by the glaciers.

However, Stubbins and others think the carbon comes mainly from modern biomass and fossil fuel burning that makes its way onto the glaciers’ surfaces.

Once deposited by snow and rain, the DOM moves with the glacier and is eventually delivered downstream where it provides food for microorganisms at the base of the aquatic food web. 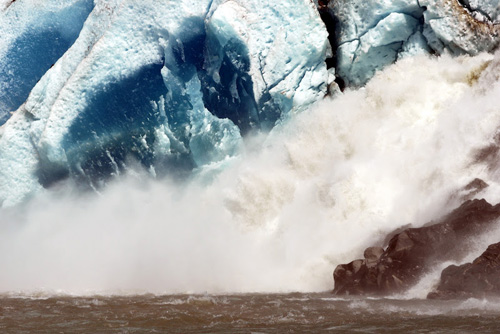 “In warmer ecosystems like in the temperate or tropical zones, once this atmospheric organic material makes landfall it is quickly consumed by plants, animals and microbial populations,” says Stubbins. “But in cold glacier environments, these carbon ‘signals’ are preserved.”

Remote regions often are perceived as pristine and devoid of human influence.

“Because deposition of combustion products is a global phenomenon, all ecosystems may be receiving this ‘subsidy,'” says Matt Kane, program director in NSF’s Division of Environmental Biology, which funded the study along with NSF’s Divisions of Ocean and Earth Sciences.

“Some aquatic systems previously thought to be pristine have, in fact, been affected by human activities for a century or more.” 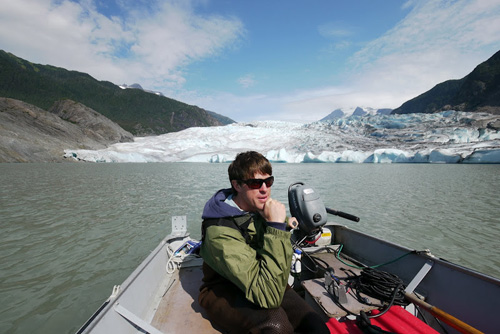 Glacier ecosystems cover ten percent of the Earth, yet how carbon moves through these ecosystems isn’t completely understood.

“More knowledge of glacier biogeochemistry is a priority, as glacier environments are among the most sensitive to climate warming and the effects of industrial pollution,” says Stubbins.

Globally, glacier ice loss is accelerating, driven in part by deposits of carbon in the form of soot or “black carbon,” which darken glacier surfaces and increase their absorption of light and heat.

Biomass and fossil fuel burning by people around the globe are the major sources of black carbon.

Stubbins and colleagues have conducted much of their research at the Mendenhall Glacier near Juneau, Alaska. 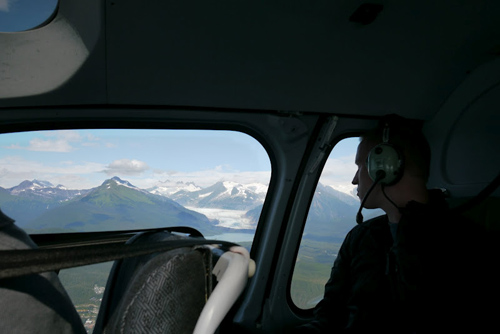 Mendenhall and other glaciers that end their journey in the Gulf of Alaska receive large amounts of rain and snow. This precipitation acts to strip the atmosphere of organic materials, then dumps them on the glaciers.

Consequently, these glaciers are among the most sensitive to global emissions of soot.

The researchers’ findings also reveal that the ocean may have changed over past centuries as a result of this process.

The microbes that form the bottom of the food web are sensitive to changes in the quantity and quality of carbon entering the marine system.

The scientists found that the organic matter in glacier outflows stems largely from human activities. This means that the supply of glacial carbon to the coastal waters of the Gulf of Alaska is a modern, post-industrial phenomenon.

“When we look at marine food webs today, we may be seeing a picture that is significantly different from what existed before the late 18th century,” says Stubbins.

“It’s unknown how this man-made carbon has influenced the coastal food webs of Alaska, for example, and the fisheries they support.”

A warming climate will increase the outflow of the glaciers and the accompanying input of dissolved organic material into the coastal ocean. 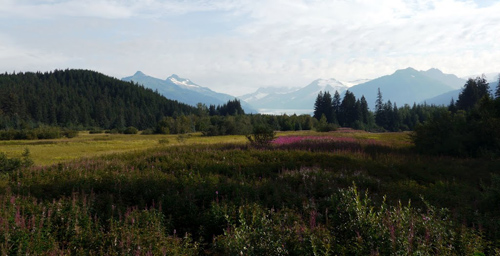 What goes around comes around: glaciers flow into the sea, which washes onto the land. Image credit: Aron Stubbins, Skidaway Institute of Oceanography

The effects will be most clear in glacially-dominated coastal regions, such as those off the Gulf of Alaska, Greenland and Patagonia. These areas have the highest rate of glacier ice loss.

“It’s not known to what extent organic material deposition has changed, and will continue to alter, glacially-dominated coastal ecosystems or the open ocean,” says Stubbins.

“But glaciers will continue to provide a valuable and unique window into the role this deposition of organic material plays in a rapidly-changing environment.”

Stubbins’ collaborators on the project include Eran Hood and Andrew Vermilyea of the University of Alaska Southeast; Peter Raymond and David Butman of Yale University; George Aiken, Robert Striegl and Paul Schuster of the U.S. Geological Survey; Rachel Sleighter, Hussain Abdulla and Patrick Hatcher of Old Dominion University; Peter Hernes of the University of California-Davis; Durelle Scott of Virginia Polytechnic Institute and State University; and Robert Spencer of the Woods Hole Research Center.