At the end of the last Ice Age, as the world began to warm, a swath of the North Pacific Ocean came to life. During a brief pulse of biological productivity 14,000 years ago, this stretch of the sea teemed with phytoplankton, amoeba-like foraminifera and other tiny creatures, who thrived in large numbers until the productivity ended—as mysteriously as it began—just a few hundred years later.

Researchers have hypothesized that iron sparked this surge of ocean life, but a new study led by Woods Hole Oceanographic Institution (WHOI) scientists and colleagues at the University of Bristol (UK), the University of Bergen (Norway), Williams College and the Lamont Doherty Earth Observatory of Columbia University suggests iron may not have played an important role after all, at least in some settings. The study, published in the journal Nature Geoscience, determines that a different mechanism—a transient “perfect storm” of nutrients and light—spurred life in the post-Ice Age Pacific. Its findings resolve conflicting ideas about the relationship between iron and biological productivity during this time period in the North Pacific—with potential implications for geo-engineering efforts to curb climate change by seeding the ocean with iron.

“A lot of people have put a lot of faith into iron—and, in fact, as a modern ocean chemist, I’ve built my career on the importance of iron—but it may not always have been as important as we think,” says WHOI Associate Scientist Phoebe Lam, a co-author of the study. 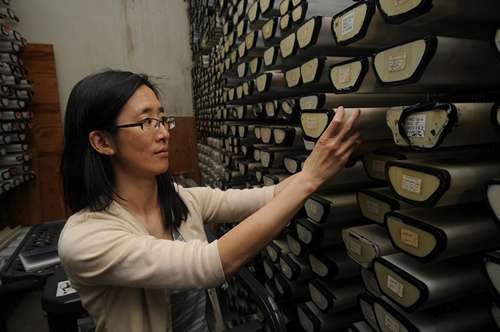 WHOI associate scientist Phoebe Lam pulls the Northwest Pacific sediment core GGC-37 from the WHOI core repository. The core offers a look at the layers of rock, sediment, and organic materials that have accumulated on the ocean floor for thousands of years. A layer of opal and calcium carbonate—the key component of the shells of phytoplankton and foraminifera, a tiny amoeba-like ocean dweller—dating back about 14,000 years indicates a period of intense biological productivity at the end of the last Ice Age. Lam and her colleagues set out to test whether this biological bloom was caused by an influx of iron. (Photo by Ken Kostel, Woods Hole Oceanographic Institution)

Because iron is known to cause blooms of biological activity in today’s North Pacific Ocean, researchers have assumed it played a key role in the past as well. They have hypothesized that as Ice Age glaciers began to melt and sea levels rose, they submerged the surrounding continental shelf, washing iron into the rising sea and setting off a burst of life.

Past studies using sediment cores—long cylinders drilled into the ocean floor that offer scientists a look back through time at what has accumulated there—have repeatedly found evidence of this burst, in the form of a layer of increased opal and calcium carbonate, the materials that made up phytoplankton and foraminifera shells. But no one had searched the fossil record specifically for signs that iron from the continental shelf played a part in the bloom.

Lam and an international team of colleagues revisited the sediment core data to directly test this hypothesis. They sampled GGC-37, a core taken from a site near Russia’s Kamchatka Peninsula, about every 5 centimeters, moving back through time to before the biological bloom began. Then they analyzed the chemical composition of their samples, measuring the relative abundance of the isotopes of the elements neodymium and strontium in the sample, which indicates which variant of iron was present. The isotope abundance ratios were a particularly important clue, because they could reveal where the iron came from—one variant pointed to iron from the ancient Loess Plateau of northern China, a frequent source of iron-rich dust in the northwest Pacific, while another suggested the younger, more volcanic continental shelf was the iron source.

What the researchers found surprised them. 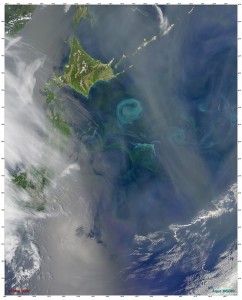 This satellite image shows a large phytoplankton bloom, about 150 miles in diameter, that occurred in the Northwest Pacific Ocean off the coast of Hokkaido, Japan in May 2009. Researchers have assumed that such blooms were driven by iron in the post-Ice Age ocean, but a new study by WHOI scientists suggests that a “perfect storm” of light and nutrients spurred an explosion of phytoplankton and other tiny creatures in the North Pacific 14,000 years ago. Photo by Norman Kuring, MODIS Ocean Color Team/NASA (Click image to enlarge)

“We saw the flux of iron was really high during glacial times, and that it dropped during deglaciation,” Lam says. “We didn’t see any evidence of a pulse of iron right before this productivity peak.”

The iron the researchers did find during glacial times appeared to be supplemented by a third source, possibly in the Bering Sea area, but it didn’t have a significant effect on the productivity peak. Instead, the data suggest that iron levels were declining when the peak began.

Based on the sediment record, the researchers propose a different cause for the peak: a chain of events that created ideal conditions for sea life to briefly flourish. The changing climate triggered deep mixing in the North Pacific ocean, which stirred nutrients that the tiny plankton depend on up into the sea’s surface layers, but in doing so also mixed the plankton into deep, dark waters, where light for photosynthesis was too scarce for them to thrive. Then a pulse of freshwater from melting glaciers—evidenced by a change in the amount of a certain oxygen isotope in the foraminifera shells found in the core—stopped the mixing, trapping the phytoplankton and other small creatures in a thin, bright, nutrient-rich top layer of ocean. With greater exposure to light and nutrients, and iron levels that were still relatively high, the creatures flourished.

“We think that ultimately this is what caused the productivity peak—that all these things happened all at once,” Lam says. “And it was a transient thing, because the iron continued to drop and eventually the nutrients ran out.” 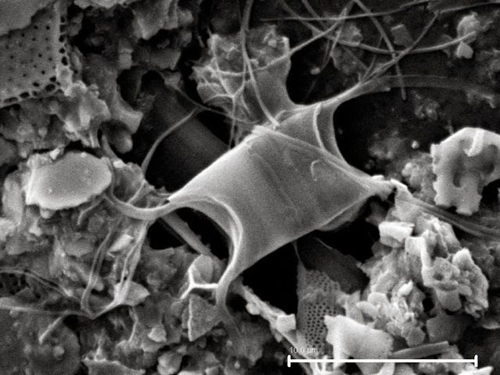 A scanning electron microscope image reveals a resting spore of the Chaetoceros diatom, a kind of phytoplankton that may have grown abundant during the burst of biological activity that followed the end of the last Ice Age in the North Pacific Ocean. (Photo by Beth Caissie)

The study’s findings disprove that iron caused this ancient bloom, but they also raise questions about a very modern idea. Some scientists have proposed seeding the world’s oceans with iron to trigger phytoplankton blooms that could trap some of the atmosphere’s carbon dioxide and help stall climate change. This idea, sometimes referred to as the “Iron Hypothesis,” has met with considerable controversy, but scientific evidence of its potential effectiveness to sequester carbon and its impact on ocean life has been mixed.

“This study shows how there are multiple controls on ocean phytoplankton blooms, not just iron,” says Ken Buesseler, a WHOI marine chemist who led a workshop in 2007 to discuss modern iron fertilization. “Certainly before we think about adding iron to the ocean to sequester carbon as a geoengineering tool, we should encourage studies like this of natural systems where the conditions of adding iron, or not, on longer and larger time scales have already been done for us and we can study the consequences.”

The research was supported by a WHOI Interdisciplinary award, which was funded by the Lawrence J. Pratt and Melinda M. Hall Endowed Award for Interdisciplinary Research. Supplemental funding was provided by the U.S. National Science Foundation, the European Research Council, and the Centre for Climate Dynamics at the Bjerknes Centre in Norway.