On Thursday, June 23rd, the WCS New York Aquarium-WHOI team successfully deployed a hi-tech acoustic monitoring buoy in New York waters that will enable scientists to eavesdrop on some of the world’s largest animals.

The buoy itself is four feet in diameter and its mast stands six feet above the sea surface. It is connected with patented “stretch hoses” to a weighted frame that sits 125 feet below on the sea floor. The frame carries a unique acoustic instrument that records and processes sound from an underwater microphone called a hydrophone. Information from detected sounds is transmitted from the instrument to the buoy through the stretch hoses, and to shore through the Iridium satellite system. The buoy is located between two major shipping lanes entering New York Harbor, 22 miles south of Fire Island’s west end. 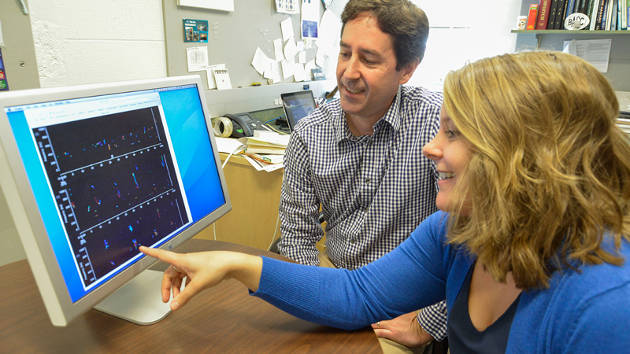 “This technology allows us to monitor the presence of several species of baleen whales in near real time, and to use that knowledge to better study and protect these endangered species in the extremely busy waters of the New York Bight,” said Baumgartner.

“The acoustic buoy data will help us to better understand when and where whales are present in New York’s waters, particularly in those places where we have little information on how whales are affected by ship traffic and ocean noise,” said Dr. Howard Rosenbaum, Director of WCS’s Ocean Giants Program and co-lead of the joint WCS New York Aquarium-WHOI project. “When used in conjunction with other surveys and technologies, this buoy will give us a more holistic picture on how whales use this marine habitat, and how to better protect whales in our own backyard.”

While similar buoys have been deployed by WHOI off the coasts of Massachusetts and Maine this year, the near real-time technology is being used for the first time in the waters of New York Bight—a region that ranges between Montauk, New York and Cape May, New Jersey—and will help researchers better understand the movements of, and threats to, the whales swimming in regional waters. The monitoring of the whales in the New York Bight is supported by The G. Unger Vetlesen Foundation.

Containing some of the busiest shipping lanes in the world, New York Bight is also home to seven species of great whales, including the humpback whale—known for its acrobatics and long, haunting songs—and the largest animal ever to exist on earth, the blue whale. The highly endangered North Atlantic right whale—one of the world’s rarest whale species—migrates through New York waters, and fin, sei, minke, and sperm whales have also been seen or heard in the waters of New York Bight.

“The presence of some of the world’s largest animals in New York waters is a reminder that we are surrounded by an ocean wilderness and something of a delightful surprise for many New Yorkers,” said Jon Forrest Dohlin, Vice President and Director of WCS’s New York Aquarium. “In addition to learning more about whales, the acoustic buoy will help us raise awareness about the diversity of marine wildlife of New York Bight, a critical step towards conserving our region’s natural wealth.”

All whale species rely on their acoustic environment to socialize and navigate, and they are vulnerable to human-related impacts such as those associated underwater noise, ship strikes, and fishing gear entanglements. Data from the buoy and other techniques as part of the project will help the team formulate new strategies for safeguarding the area’s whale populations and coordinate with state and federal agencies to protect whales and their most important habitats.

Both WHOI and WCS have a long tradition of research on whale sounds. The late William Edward Schevill of WHOI was a pioneer in the field of whale bio-acoustics, making one of the first recordings of whales (specifically beluga whales) in 1949 in Quebec’s Saguenay River. The discovery in the late 1960s that humpback whales sing songs was the result of research by Dr. Roger Payne, a former WCS scientist who turned the sounds of whales into a popular sensation through the 1970 recording “Songs of the Humpback Whale,” still the best-selling recording of natural sounds to this day.

The digital acoustic monitoring buoy now floating in New York Bight will listen for whale vocalizations and other noise, and will relay information about the sounds it collects to a shore-side computer at WHOI. Analyst Julianne Gurnee of the Passive Acoustic Research Group at the Northeast Fisheries Science Center in Woods Hole, a long-time partner with WHOI in the development of the real-time acoustic technology, will review this information for whale calls. The analyzed data will be made available to the public through web sites at WHOI and through the WCS New York Aquarium, in its Ocean Wonders: Sharks! exhibit and as part of its Blue York Campaign.

With support from the National Oceanic and Atmospheric Administration (NOAA), WHOI also plans to deploy an autonomous device called a Wave Glider, a vehicle equipped with the same real-time acoustic technology as the buoy that will utilize energy from waves and the sun to patrol the waters of New York Bight. Whale detections from the Wave Glider will also be available on the WHOI and WCS web sites. The buoy and Wave Glider will work in tandem with other surveys that will help identify particular areas that are most important for NY whales, and, in turn, the information will be used to help mitigate impacts from threats that these whales may face. Data from these acoustic platforms will help direct forthcoming surveys, led by Dr. Rosenbaum and Dr. Ricardo Antunes from WCS’ Ocean Giants team. These studies will contribute to overall efforts to monitor and protect whales and their habitats in and around New York waters.

WCS’s New York Aquarium is committed to restore and protect populations of threatened marine wildlife and habitats in local waters, and to inform and inspire New Yorkers about the natural heritage of New York Bight. The WCS New York Aquarium also conducts research on the region’s shark and ray populations, and is working to study and conserve the deep-water species of the Hudson Canyon, the largest submarine canyon off the East Coast.