AUSTIN, Texas — In a development that will help predict potential sea level rise from the Antarctic ice sheet, scientists from The University of Texas at Austin’s Institute for Geophysics have used an innovation in radar analysis to accurately image the vast subglacial water system under West Antarctica’s Thwaites Glacier. They have detected a swamp-like canal system beneath the ice that is several times as large as Florida’s Everglades.

The findings, as described last week in the Proceedings of the National Academy of Sciences, use new observational techniques to address long-standing questions about subglacial water under Thwaites, a Florida-sized outlet glacier in the Amundsen Sea Embayment considered a key factor in projections of global sea level rise. On its own, Thwaites contains enough fresh water to raise oceans by about a meter, and it is a critical gateway to the majority of West Antarctica’s potential sea level contribution of about 5 meters.

The new observations suggest the dynamics of the subglacial water system may be as important as well recognized ocean influences in predicting the fate of Thwaites Glacier.

Without an accurate characterization of the bodies of water deep under Thwaites, scientists have offered competing theories about their existence and organization, especially in the rapidly changing region where the glacier meets the ocean. 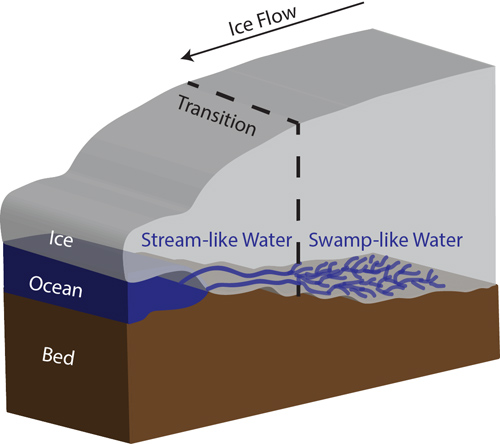 Using an innovation in airborne ice-penetrating radar analysis developed by lead author Dusty Schroeder, a doctoral candidate at the Institute for Geophysics, the Texas team shows that Thwaites’ subglacial water system consists of a swamp-like canal system several times as large as Florida’s Everglades lying under the deep interior of the ice sheet, shifting to a series of mainly stream-like channels downstream as the glacier approaches the ocean.

Scientists have attempted to use ice-penetrating radar to characterize subglacial water for many years, but technical challenges related to the effects of ice temperature on radar made it difficult to confirm the extent and organization of these water systems. Schroeder’s technique looking at the geometry of reflections solves this problem, because the temperature of the ice does not affect the angular distribution of radar energy.

“Looking from side angles, we found that distributed patches of water had a radar signature that was reliably distinct from stream-like channels,” said Schroeder. He compared the radar signature to light glinting off the surface of many small interconnected ponds when viewed out of an airplane window. 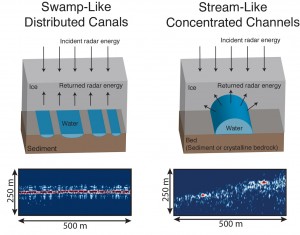 Cartoon representations (above) and radar images (below) of the distinct swamp-like and stream-like water systems observed beneath Thwaites Glacier, West Antarctica. Image credit: University of Texas Institute for Geophysics (click image to enlarge)

Distinguishing subglacial swamps from streams is important because of their contrasting effect on the movement of glacial ice. Swamp-like formations tend to lubricate the ice above them whereas streams, which conduct water more efficiently, are likely to cause the base of the ice to stick between the streams. (The effect is similar to the way rain grooves on a tire can help prevent a car from hydroplaning on a wet road.)

As a result of this change in slipperiness, the glacier’s massive conveyor belt of ice piles up at the zone where the subglacial water system transitions from swamps to streams.

This transition forms a stability point along a subglacial ridge that holds the massive glacier on the Antarctic continent.

“This is where ocean and ice sheet are at war, on that sticking point, and eventually one of them is going to win,” said co-author Don Blankenship, a senior research scientist from the Institute for Geophysics.

Observations of the subglacial stream-and-swamp dynamic and the sub-ice topography suggest that Thwaites Glacier is stable in the short term, holding its current position on the continent. However, the large pile of ice that has built up in the transition zone could rapidly collapse if undermined by the ocean warming or changes to the water system.

“Like many systems, the ice can be stabilized until some external factor causes it to jump its stability point,” said Blankenship. “We now understand both how the water system is organized and where that dynamic is playing itself out. Our challenge is to begin to understand the timing and processes that will be involved when that stability is breched.”

Current models predicting the fate of the glacier do not yet account for these dynamic, subglacial processes.

The findings rely on radar data acquired during airborne geophysical surveys over West Antarctica by the Institute for Geophysics, with operational support from the National Science Foundation. The analysis was enabled through intensive supercomputing supported by the university’s Texas Advanced Computing Center.

The research was funded through grants from the National Science Foundation and NASA, with additional support from both the Vetlesen Foundation and the Institute for Geophysics, which is a research unit of the university’s Jackson School of Geosciences.