The six noble gases do not normally dissolve into minerals, leaving earth scientists to wonder how they are subducted back into the Earth. Researchers at Brown have discovered that the lattice structure of minerals such as amphibole provides a way. Better yet, the multiple isotopes of noble gases could help scientists track volatiles like water and carbon.

PROVIDENCE, R.I. [Brown University] — The noble gases get their collective moniker from their tendency toward snobbishness. The six elements in the family, which includes helium and neon, don’t normally bond with other elements and they don’t dissolve into minerals the way other gases do. But now, geochemists from Brown University have found a mineral structure with which the nobles deign to fraternize.

Researchers led by Colin Jackson, a graduate student in geological sciences, have found noble gases to be highly soluble in amphibole, a mineral commonly found in oceanic crust. “We found remarkably high solubility,” said Stephen Parman, assistant professor of geological sciences at Brown and Jackson’s Ph.D. adviser. “It was three or four orders of magnitude higher than in any other mineral than had been measured.”

The findings, which are published in Nature Geoscience, are a step toward answering puzzling questions about how noble gases are cycled between the atmosphere and the depths of the Earth. 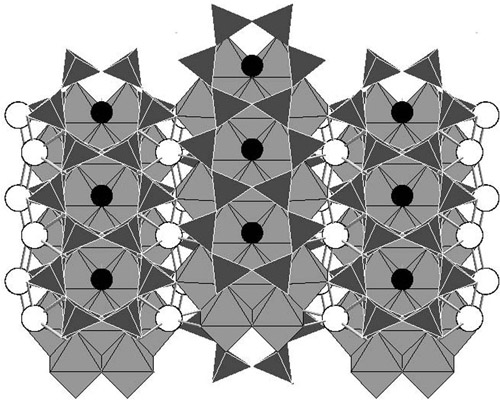 The Ring Cycle. Amphibole’s lattice structure is made up of tetrahedral and octahedral structures linked together in a way that creates a series of rings. It’s those rings — A-sites — that could provide a home for otherwise finicky noble gases. Image credit: Parman lab/Brown University

Gases in the air we breathe are on a geological conveyor belt of sorts, cycled from the Earth’s mantle to the atmosphere and back again. Carbon dioxide, water vapor and other gases are released into the atmosphere and oceans from molten magma during volcanic eruptions, and then returned to depths through subduction, when one tectonic plate slides underneath another. The subducting crust is injected deep into the mantle, taking water and any other volatiles it may carry along for the ride.

Noble gases are also released during volcanic activity, but the amount of those gases returned to the mantle through subduction was long thought to be minimal. After all, if noble gases don’t dissolve in minerals, they would lack a vehicle to make the trip. Recent research, however, has suggested that some noble gases are indeed recycled, leaving scientists at a loss to find a mechanism for it. By showing definitively that noble gases are soluble in amphibole, Jackson and his colleagues have shown how noble gases could be carried in subducting slabs.

Jackson performed a series of experiments to see if the number of empty rings in different types of amphibole were correlated to its ability to dissolve noble gases. He placed cut amphibole gems into a tube with helium or neon under high pressure and temperature, and then used a mass spectrometer to see how much of the gas had dissolved in each gem over the duration of each experiment. The experiments showed that noble gas solubility was highest in types of amphibole with the most unoccupied ring structures.

“This was the meat of the paper,” Parman said. “It’s telling us a specific site where we think the noble gases are. It might be the first time anyone has made a positive identification of where noble gases are going into a mineral.”

Importantly, the researchers said, amphibole isn’t the only crustal mineral with these ring structures. Ring structures are actually quite common in crustal minerals, and could provide a wide variety of potential vehicles that could take noble gases back to the depths via subduction.

Understanding how noble gases are cycled between the Earth’s surface and interior could shed new light on how other volatiles are recycled, the researchers said.

Scientists are particularly interested in tracking the cycling of water and carbon. Water is obviously vital for life, and carbon cycling has an important impact on the climate. Scientists try to track the cycle by looking at isotope ratios, which can provide a fingerprint that helps to identify where elements originated. Butarbon and the hydrogen in water have only a few isotopes that scientists can use for tracking, and in the case of hydrogen, the isotope ratios are easily thrown off by all kinds of natural processes.

The noble gases, on the other hand, have lots of isotopes, giving scientists ways to track them with great specificity. So if noble gases are cycled in the same minerals that cycle other volatiles like water and carbon, they could be used as a marker to track those other volatiles. “It’s a very high-fidelity fingerprint because you have so many isotopes to play with,” Jackson said.

There’s more work to be done before noble gases could be used as such a fingerprint, but this work does provide a first step: showing which kinds of minerals could be responsible for noble gas recycling.

Other authors on the paper were Simon Kelley of The Open University in the United Kingdom and Reid Cooper, professor of geological sciences at Brown. The work was funded by the National Science Foundation’s Division of Earth Sciences (1019229).