AUSTIN, Texas — Researchers at The University of Texas at Austin have discovered that a type of cancer found primarily in children can grow only when signaled to do so by other nearby cells that are noncancerous. The finding, published in the Proceedings of the National Academy of Sciences, contributes to a growing body of research that implicates the environment around a cancer in its spread — an area of study that holds promise for new alternatives to treat the disease.

Most cancer research to date has focused on understanding the inner workings of cancer cells, and the majority of existing therapies target malignant cells in isolation, working to shrink or remove them through surgery, chemotherapy or radiation. However, in recent years, more scientists have begun to explore not only the cancer “seed” but its surrounding “soil,” meaning other factors in the microenvironment surrounding a cancer that cause tumors to grow and spread. Scientists believe that understanding how cancer feeds on its environment could lead to new ways to starve it of conditions required for growth.

“It’s only more recently that people have really appreciated that tumors are complex organs in and of themselves with all of the heterogenous cell types that can talk to each other and promote each other’s survival and proliferation,” says Lauren Ehrlich, an assistant professor of molecular biosciences, who led the team that published the most recent study. 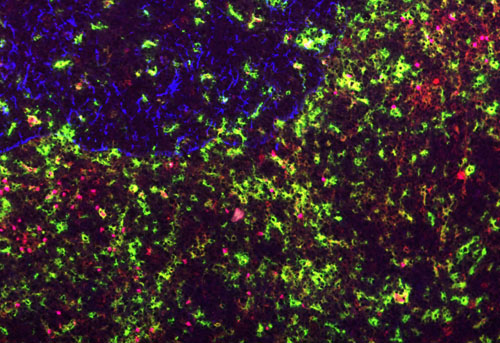 T-Cell leukemia can only survive and grow when sent a signal from nearby cells called dendritic cells (shown in green) in the tumor microenvironment. Image courtesy of Dr. Lauren Ehrlich

Ehrlich’s team found for the first time that a neighboring cell in the soil around T-cell acute lymphoblastic leukemia (T-ALL) creates the necessary condition for that cancer to grow. Without the interaction with the outside cell, the cancer collapses, unable to grow or survive the way it does in a T-ALL patient.

In a healthy person, T-cells help fight off infections and disease in partnership with another type of cell, called dendritic cells. Dendritic cells help T-cells find and attack pathogens, and they groom new T-cells to prevent them from mistakenly fighting off healthy parts of the body. Ehrlich and her team discovered that in T-ALL these dendritic cells essentially send the wrong message, signaling T-cells that had turned cancerous to survive and expand.

T-ALL afflicts mostly children, with more than 500 new pediatric diagnoses in the United States annually. The leukemia, which occurs in a child’s developing T-cells, is fatal in about 1 in 4 cases. In the remaining patients with the disease, T-ALL requires intense levels of chemotherapy or radiation.

“It’s obviously very toxic, and these kids are living with the morbidity effects of these very toxic therapies throughout their lives,” Ehrlich says. “So if we can find directed therapies to more specifically target the tumors without being overly toxic to the person, that would obviously be much better.”

Ehrlich and her team studied cancerous cell lines associated with T-ALL in a variety of ways. When the cancer cells were in a neutral culture or surrounded by a mix of cells similar to what would be found in a healthy person, no growth occurred, and the cancer died off. Only in a mix similar to what is actually found in the soil of a T-ALL patient could the cancer survive and spread. The dendritic cells spurred that growth in all cases, both for newly developing T-ALL cells as well as tumors that had spread to distant organs in experimental models. Tissue samples from Texas Children’s Hospital confirmed similar growth environments with abundant dendritic cells in pediatric patients.

Previous research has found similar patterns with cancers of the blood, breast and skin, where a variety of noncancerous cells send signals that are necessary to cause tumors to survive and grow.

“We hope this study will be a catalyst to spur other research groups to further elucidate the roles of dendritic cells in supporting T-ALL,” said Todd Triplett, a postdoctoral researcher and a lead author on the study, “since that could ultimately lead to the discovery of novel therapeutic targets that are more effective and less toxic than current treatment regimens.”

Funding support for the study was provided by the Cancer Prevention and Research Institute of Texas, the American Cancer Society and the Intramural Research Program of the NIH.