Scientists debate likelihood of finding life on other planets by 2042

In a debate hosted by the Department of Astronomy & Astrophysics, six scientists argued whether remote sensing will reveal evidence of extant life on an exoplanet—any planet outside of our solar system—by the end of 2042.

The scientists arguing for the discovery of extra-terrestrial life in the near future centered on the ideas that life is versatile, that living organisms create noticeable biosignatures by changing their environment’s chemical makeup, and that with the increasing number of earth-like planets found through ventures like the Kepler mission, it shouldn’t be too long before a planet with the right signs is found.

“The history of science is full of many surprises,” said Laura Kreidberg, a PhD student of astronomy and astrophysics. “We should be open-minded about what to expect.” 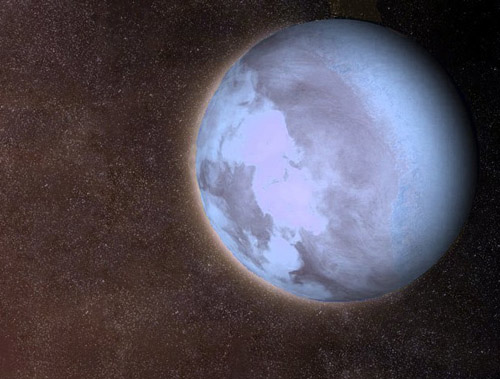 UChicago scientists debated whether remote sensing will reveal evidence of extant life on an exoplanet by the end of 2042. Image source: Wikipedia

The opposition focused on branching lines of logic. In addition to the possibility of false positives on biosignatures and the unlikelihood of humanity devoting serious resources to finding life, a paradox by UChicago Nobel laureate Enrico Fermi argues that if there’s life among billions of planets, some should be advanced enough to have reached Earth already.

“We hope that we can find life in the universe,” said Edwin Kite, an assistant professor of geophysical sciences. “But we should vote based on facts, not hopes.”

The debate, held in fall 2015, was the penultimate event for AstroChicago 123, which honored the department’s founding with talks, a film and panels on the department’s past and ongoing research. It also celebrated the completion of the William Eckhardt Research Center.

In the discussion, three researchers defended each side. Audience members had the opportunity to vote before and after the debate.

Dorian Abbot, associate professor of geophysical sciences, framed the arguments for finding extra-terrestrial life in the near future, or the “yes” side. First, he described how microbial life was common and able to survive in extreme conditions on Earth. This meant that, with the raw materials essential for living matter being abundant in our universe, life could likely survive on planets within habitable zones.

Leslie Rogers, assistant professor of astronomy and astrophysics, explained how all life modifies its environment, and that biosignatures such as oxygen and ammonia would be positive evidence toward the existence of life on an exoplanet. It would only take one thousandth of the biomass in the Earth’s ocean to produce a noticeable amount of ammonia.

Kreidberg said that NASA currently has the technology to find these signatures, and had a list of planets that were promising candidates for life.

Kite, framing the arguments of the “no” side, explained that at the lab and on the planetary scale, life does not arise spontaneously—the exception being Earth, which proved that life was rare. He further explained that there is no combination of atmospheric signatures that cannot be explained through non-biological processes.

Daniel Fabrycky, assistant professor of astronomy and astrophysics, argued from the standpoint of Fermi’s paradox—that with the abundance of earth-like planets, including many much older than Earth, an alien civilization should have reached the stage of interstellar travel and made some contact with Earth. Following the theory further, Fabrycky argued that confirming existence of life on exoplanets would mean there’s a higher probability of intelligent alien civilizations. He also noted the fact that over billions of years no intelligent aliens have made it to the point of reaching Earth, meaning humanity has dismal prospects for space exploration and expansion. “By voting yes on your ballot, you are dooming humanity,” Fabrycky quipped.

The last argument against finding life by 2042, put forth by Jacob Bean, an assistant professor of astronomy and astrophysics, was that humanity had too many political hurdles to overcome. Should humanity devote serious funding to developing remote-sensing technology to find extant life over other projects, it might find evidence that life exists elsewhere in the universe. However, Bean expressed doubt that the astrophysics community could band together, let alone the nation, to agree to this mission and overcome the technological difficulty.

Before the debate began, 33 members of the audience voted that life on an exoplanet would not be found by 2042, and 38 voted it would. After the debate, 40 members of the audience voted life would not be found and 38 voted it would, which Angela Olinto, the Homer J. Livingston Professor in Astronomy & Astrophysics and the College, attributed to “the Chicago tradition of voting often.” The ballot and a summary of the debate were placed in a time capsule to be opened 2042.

For those interested in learning more about exoplanets, lectures and classes on the subject will be forthcoming during Winter and Spring quarters. Rogers will give a faculty research lecture on the “Diversity and Demographics of Distant Rocky Worlds” at noon Feb. 29 in ERC 576. In addition, Fabrycky and Bean will teach classes on exoplanets in Spring Quarter.

– By Erin Fuller and Ryan Goodwin