More than 50 years after the invention of the laser, scientists at Yale University have built the world’s first anti-laser, in which incoming beams of light interfere with one another in such a way as to perfectly cancel each other out. The discovery could pave the way for a number of novel technologies with applications in everything from optical computing to radiology.

Conventional lasers, which were first invented in 1960, use a so-called “gain medium,” usually a semiconductor like gallium arsenide, to produce a focused beam of coherent light-light waves with the same frequency and amplitude that are in step with one another.

Last summer, Yale physicist A. Douglas Stone and his team published a study explaining the theory behind an anti-laser, demonstrating that such a device could be built using silicon, the most common semiconductor material. But it wasn’t until now, after joining forces with the experimental group of his colleague Hui Cao, that the team actually built a functioning anti-laser, which they call a coherent perfect absorber (CPA). 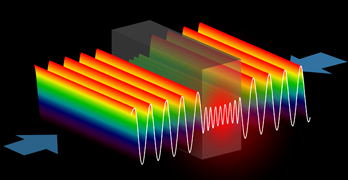 In the anti-laser, incoming light waves are trapped in a cavity where they bounce back and forth until they are eventually absorbed. Their energy is dissipated as heat. Image credit: Yidong Chong

The team, whose results appear in the Feb. 18 issue of the journal Science, focused two laser beams with a specific frequency into a cavity containing a silicon wafer that acted as a “loss medium.” The wafer aligned the light waves in such a way that they became perfectly trapped, bouncing back and forth indefinitely until they were eventually absorbed and transformed into heat.

Stone believes that CPAs could one day be used as optical switches, detectors and other components in the next generation of computers, called optical computers, which will be powered by light in addition to electrons. Another application might be in radiology, where Stone said the principle of the CPA could be employed to target electromagnetic radiation to a small region within normally opaque human tissue, either for therapeutic or imaging purposes.

Theoretically, the CPA should be able to absorb 99.999 percent of the incoming light. Due to experimental limitations, the team’s current CPA absorbs 99.4 percent. “But the CPA we built is just a proof of concept,” Stone said. “I’m confident we will start to approach the theoretical limit as we build more sophisticated CPAs.” Similarly, the team’s first CPA is about one centimeter across at the moment, but Stone said that computer simulations have shown how to build one as small as six microns (about one-twentieth the width of an average human hair).

The team that built the CPA, led by Cao and another Yale physicist, Wenjie Wan, demonstrated the effect for near-infrared radiation, which is slightly “redder” than the eye can see and which is the frequency of light that the device naturally absorbs when ordinary silicon is used. But the team expects that, with some tinkering of the cavity and loss medium in future versions, the CPA will be able to absorb visible light as well as the specific infrared frequencies used in fiber optic communications.

It was while explaining the complex physics behind lasers to a visiting professor that Stone first came up with the idea of an anti-laser. When Stone suggested his colleague think about a laser working in reverse in order to help him understand how a conventional laser works, Stone began contemplating whether it was possible to actually build a laser that would work backwards, absorbing light at specific frequencies rather than emitting it.

“It went from being a useful thought experiment to having me wondering whether you could really do that,” Stone said. “After some research, we found that several physicists had hinted at the concept in books and scientific papers, but no one had ever developed the idea.”