A significant turning point in the life of Haifan Lin, Ph.D., Eugene Higgins Professor of Cell Biology; professor of genetics and of obstetrics, gynecology, and reproductive sciences; and founding director of Yale’s Stem Cell Center, may have come when he was just 15. Already a high achiever, as he has been ever since, he completed high school three years younger than his classmates.

At that time in the 1970s, Mao Zedong’s China still suffered under the Cultural Revolution, and ordinarily Lin’s diploma would have been a ticket to the countryside. “You were sent to some peasant village to be re-educated doing labor work,” says Lin. “I couldn’t go. I was too young—the minimum age was 17.” Spared potential years of hardship, he used the time before he could apply to college to teach at an elementary school in his hometown. From there his career advanced rapidly.

While an undergraduate at the prestigious Fudan University in Shanghai, majoring in biochemistry, Lin became one of just 50 students in all of China accepted to study life sciences though an exchange program that let Chinese students earn doctorates at American universities. At Cornell University he pursued a Ph.D. in developmental biology. “I became very interested in developmental phenomena—how a cell becomes an organism,” Lin says. 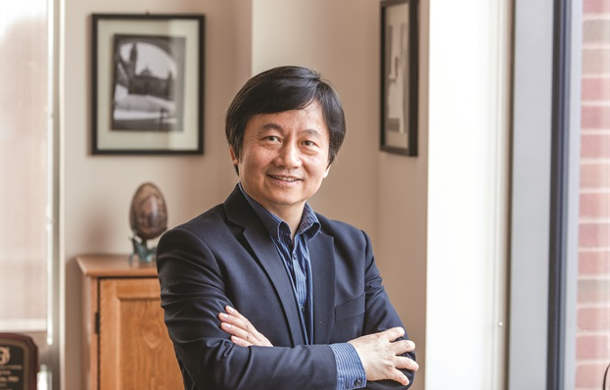 Haifan Lin has been a leader in stem cell research since its infancy. In just over a decade since he arrived at Yale to found the university’s Stem Cell Center, the center has grown from just a pair of labs to more than 40. Lin and his team are closing in on what they hope will be major breakthroughs in the clinical application of stem cells. (Photo by Robert A. Lisak)

His advisor, Mariana F. Wolfner, Ph.D., supported Lin’s pursuit of his interest in genes related to embryonic cell division, even though that was not within the scope of her lab’s research. Ignoring advice to choose a new subject for postdoctoral work, Lin searched for a lab to continue researching the cell cycle—this time in stem cells. In 1990, lab directors at MIT and Harvard accepted Lin, but only Allan C. Spradling, Ph.D., at the Carnegie Institution of Washington encouraged him to pursue his own interest on the side.

“At the time, researchers didn’t know exactly what stem cells looked like or exactly where to find them,” Lin says. He set out to create a model for identifying stem cells. Lin meticulously studied ovaries in fruit flies using a laser beam he describes as “small enough to write calligraphy on a strand of human hair.” He discovered an organelle, called the spectrosome, located only in germline stem cells, which helped the stem cells reproduce. “In research, one has to be imaginative,” he says. “What connects imagination to action? I was never afraid of failure.”

Before he enrolled at Fudan, Lin had considered becoming a professional artist. That, too, influences his science, as he mentally reconstructs 3-D structures of organs, tissues, and cells from 2-D images, or designs figures and research slides. “Broadly, it helps me appreciate the aesthetics, imaginativeness, and creativeness in research and scientific thinking,” he says. After his postdoctoral studies, in 1994 Lin joined the faculty of Duke University, where he rose to full professor and founded and directed Duke’s stem cell research program. Dean Robert J. Alpern, M.D., Ensign Professor of Medicine, recruited him in 2006 to found Yale’s center.

That same year, Lin and colleagues first described a novel class of small non-coding RNAs, called piRNAs, a discovery that the journal Science hailed as a “top breakthrough” for the year. In one short decade, with valuable support from the state of Connecticut and private donors, Lin has grown the Stem Cell Center from two labs to more than 40 with nearly 100 faculty involved in stem cell research across the campus.

Meanwhile, his piRNA research continues. Last year, his team published a paper in the Journal of Biological Chemistry suggesting that one of four P-element-induced wimpy testis (PIWI) proteins, called PIWIL4, actively promotes triple negative breast cancer and could be a therapeutic target. The group has also found this class of proteins in other cancers. Lin says he wants to have a direct impact on patient care through his fundamental basic stem cell research. “The field is really on the verge of translating these discoveries into clinical settings and pharmaceutical applications,” he says.

For potential therapies that rely on injecting stem cells into a patient, the field faces a problem of how to efficiently grow the cells before injection. But, says Lin, with an optimistic smile, “that is more of a problem of engineering than science.”