What do Velcro, Tang, penicillin, the structure of DNA and the World Wide Web have in common?

They all involved serendipitous discoveries—chance discoveries made by alert, curious scientists who were looking for other things when they happened across a fortuitous finding. Rather than ignoring their accidental discoveries, these curious, open-minded scientists harnessed their luck. “Chance favors only the prepared mind,” as Louis Pasteur put it.

Since serendipity has played such a big role in science, the Office of the Vice President for Research and for National Laboratories at the University of Chicago selected serendipity as the topic for its ninth Joint Speaker Event. The series is designed to promote dialogue and collaboration among University faculty members and scientists, researchers and engineers from Argonne National Laboratory and Fermi National Accelerator Laboratory.

“Science and Serendipity: Happenstance and other Factors Underlying Accidental Discoveries” was held last month at the new Chicago Innovation Exchange. This hub for multidisciplinary collaboration and support for business start-ups was a perfect setting for the event because “the Exchange is about engineering serendipity: putting people together that need to be together—but would not otherwise be together,” said John Flavin, executive director. 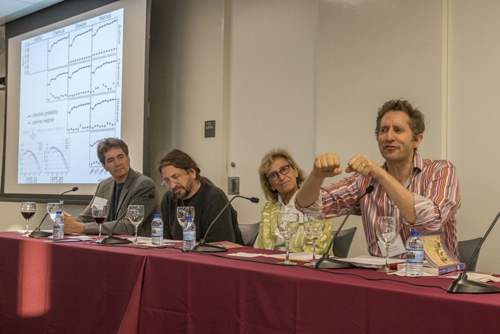 Panelists discussed several examples of serendipity in science. Radar was developed during World War II to watch airplanes in the sky, and scientists were initially frustrated when other things showed up on their screens. Little by little, however, they appreciated the ability to use radar to track weather patterns; see flocks of birds and swarms of insects; and study the dynamics of animals in flight. “Meteorologists, ecologists and other scientists got interested and, thus, a series of serendipitous events in radar led to the development of entire branches of science,” said panelist Rick Stevens, professor of computer science at the University and associate lab director for computing, environment and life sciences at Argonne.

Another good example of serendipity is the work of Charles Darwin, according to panel moderator Robert Richards, professor of philosophy, history and psychology at the University. Had Darwin not failed in medical school, been recommended by a professor to go on the Voyage of the Beagle, consulted with John Gould, the leading ornithologist at the British Museum, and read Thomas Malthus’ An Essay on the Principle of Population,—“for amusement,” as Darwin put it—he might never have come up with the theory of Natural Selection, Richards said.

In an experiment designed to determine whether protons decay, 3,300 tons of matter were put in a salt mine under Lake Erie—so far underground to protect the matter from cosmic rays that would throw off the readings of “breathtakingly sensitive” detectors, according to panelist Robert Tschirhart, a senior scientist at Fermilab. But in 1987, a supernova went off in the Milky Way, and the experiment detected a neutrino from that star. “By sheer chance, an experiment that was designed to protect against cosmic rays serendipitously detected the oscillation of a neutrino from a distant star, which allowed us to discover that neutrinos have mass,” Tschirhart said.

And a few years ago, a cardiologist was using beta-blockers to treat an infant for arrhythmia. The child happened to have a hemangioma, a benign tumor that can cause serious problems when it develops on the larynx or eye. When the physician noticed that the tumor disappeared after beta-blockers were administered, he reported his findings. “As a result, the preferred treatment for hemangioma around the world went from toxic steroids to much safer beta blockers within only about a year,” said panelist Jessica Kandel, professor of surgery and chief of pediatric surgery at the Comer Children’s Hospital. “Now, that’s serendipity!”

Science is also full of stories where serendipity did not happen. The first scientists to detect buckminsterfullerene through mass spectroscopy did not notice the distinctive carbon-60 molecule, said Donald Levy, vice president for Research and for National Laboratories at the University. “Buckyballs (as they are called) popped up, and the researchers missed it.” They “really blew it,” Levy added, noting that three Nobel Prizes have been awarded related to buckminsterfullerene, and that buckyballs later proved critical to the development of nanotechnology.

Stevens said the common features of serendipity include working in collaboration with others rather than in isolation, not being at risk of immediately losing your funding, and being confident and fearless of failure.

So how surprising are serendipitous discoveries? It turns out not very, if you are looking for connections made by scientists reaching out to local networks, said panelist James Evans, director of the Knowledge Lab and professor of sociology at the University. Using probability models, Evans found that these types of local connections are predictable as well as much less risky than reaching out across other areas of science.

“If you only have a budget for 10 experiments, but the really field-defining experiments end up being these distant experiments, it’s very difficult for an individual scientist to underwrite that risk,” said Evans. The greater the risk, he suggested, the more valuable institutions like national labs and industry labs become.

Of course, scientists have to explain and justify their work ahead of time in order to secure funding, but many great discoveries have been made outside of the explicit goals and parameters of the prescribed research. “Being too restrictive is the enemy of new knowledge,” Kandel said.