Born slightly heavy on average, a sample of hundreds of infants in American Samoa continued to gain weight quickly after birth, achieving high rates of obesity within 15 months. Breastfeeding slowed weight gain in boys. Findings may presage infant obesity in other populations where obesity is increasing population wide.

PROVIDENCE, R.I. [Brown University] — As some Pacific island cultures have “westernized” over the last several decades, among the changes has been a dramatic increase in obesity. Researchers don’t understand all the reasons why, but even a decade ago in American Samoa 59 percent of men and 71 percent of women were obese. A new Brown University study finds that the Samoan epidemic of obesity may start with rapid weight gain in early infancy. 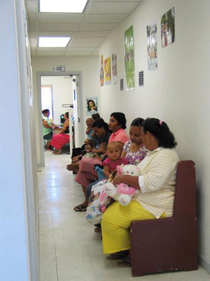 Check-up at the well baby clinic, American Samoa. The average weight gain curve of Samoan babies is similar to babies that are nutritionally deprived in the womb but then compensate by gaining weight rapidly after birth. Samoan babies are not undernourished. Image credit: Kelley Smith

The implications of the study published online in the journal Pediatric Obesity may not be confined to Polynesian populations, said the authors. American Samoa’s prevalence of obesity in infancy may be the harbinger of a slower-moving trend in the same direction in developed nations. Places like the mainland United States, after all, are the origin of the more sedentary, calorie-rich lifestyle that has largely replaced subsistence fishing and agriculture in American Samoa.

“One of the reasons we think Samoa is interesting is really because we think the level of obesity there could actually foreshadow what we see here in the United States and other high-income nations if we continue the way that we’re going,” said study lead author Nicola Hawley, a postdoctoral research fellow in the Alpert Medical School at Brown University and the Weight Control and Diabetes Research Center.

To conduct the study, Hawley and her co-authors examined the medical records of nearly 800 American Samoan babies born between 2001 and 2008. The babies were all singleton births, carried to term of 37-42 weeks.

In particular, the team tracked the babies’ growth, weight gain, and whether they were breastfed, given formula or a mix of both. They used the data to plot the trajectories of infant weight gain up to 15 months of age.

The researchers made several main findings:

Stephen McGarvey, research professor of epidemiology and the study’s senior author, said the babies were perhaps less heavy at birth than one might expect given the prevalence of obesity among their mothers, but the subsequent weight gain in early infancy was the study’s most important finding. Rapid weight gain in infancy is widely understood to be a risk factor for adult obesity.

The median weight gain among the Samoan babies in the first four months of life was 978 grams a month, McGarvey said. That figure is almost 20 percent more than the 820 grams a month documented in a prior study of babies on the U.S. mainland. 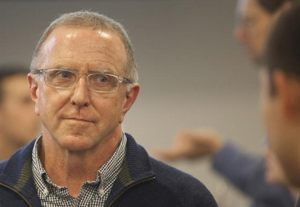 Stephen McGarvey. At birth, Samoan babies may be less heavy than expected, but they gain weight 20 percent faster than babies in the U.S. mainland. Breastfeeding appears to slow that gain for male babies but not for females. Image credit: Mike Cohea/Brown University

The Samoan babies’ average weight gain curve, he said, resembled the trajectory epidemiologists see among undernourished babies who suffer intrauterine growth restriction, meaning they are nutritionally deprived in the womb but then compensate by gaining weight rapidly after birth. Samoan babies are not undernourished, McGarvey said, but they may also be somehow constrained in their growth as fetuses, perhaps because they are at an upper limit of growth before birth.

“We wonder whether this response is not partially a response to the events in utero,” said McGarvey. He and Hawley plan to pursue that question in future research.

Hawley noted that while the seemingly protective effect of breastfeeding has been shown in other studies, the results bolster the case for the idea that it extends to non-European populations. The finding also suggests a specific tactic — encouraging breastfeeding throughout more of infancy — that public health officials can employ in stemming infant obesity, at least in boys.

The researchers acknowledged that further research is required to understand why the benefits of breastfeeding were not seen in girls.

Most importantly, McGarvey and Hawley said, the study indicates that in a population with prevalent obesity such as in American Samoa, excessive weight begins in infancy.

Additional authors on the study are William Johnson of the University of Minnesota and Ofeira Nu’usolia of the Tafuna Clinic of the American Samoa Department of Health.