Rust – iron oxide – is a poor conductor of electricity, which is why an electronic device with a rusted battery usually won’t work. Despite this poor conductivity, an electron transferred to a particle of rust will use thermal energy to continually move or “hop” from one atom of iron to the next. Electron mobility in iron oxide can hold huge significance for a broad range of environment- and energy-related reactions, including reactions pertaining to uranium in groundwater and reactions pertaining to low-cost solar energy devices. Predicting the impact of electron-hopping on iron oxide reactions has been problematic in the past, but now, for the first time, a multi-institutional team of researchers, led by scientists at the U.S. Department of Energy (DOE)’s Lawrence Berkeley National Laboratory (Berkeley Lab) have directly observed what happens to electrons after they have been transferred to an iron oxide particle.

“We believe this work is the starting point for a new area of time-resolved geochemistry that seeks to understand chemical reaction mechanisms by making various kinds of movies that depict in real time how atoms and electrons move during reactions,” says Benjamin Gilbert, a geochemist with Berkeley Lab’s Earth Sciences Division and a co-founder of the Berkeley Nanogeoscience Center who led this research. “Using ultrafast pump-probe X-ray spectroscopy, we were able to measure the rates at which electrons are transported through spontaneous iron-to-iron hops in redox-active iron oxides. Our results showed that the rates depend on the structure of the iron oxide and confirmed that certain aspects of the current model of electron hopping in iron oxides are correct.”

Gilbert is the corresponding author of a paper in the journal Science that describes this work. The paper is titled “Electron small polarons and their mobility in iron (oxyhydr)oxide nanoparticles.” Co-authoring the paper were Jordan Katz, Xiaoyi Zhang, Klaus Attenkofer, Karena Chapman, Cathrine Frandsen, Piotr Zarzycki, Kevin Rosso, Roger Falcone and Glenn Waychunas. 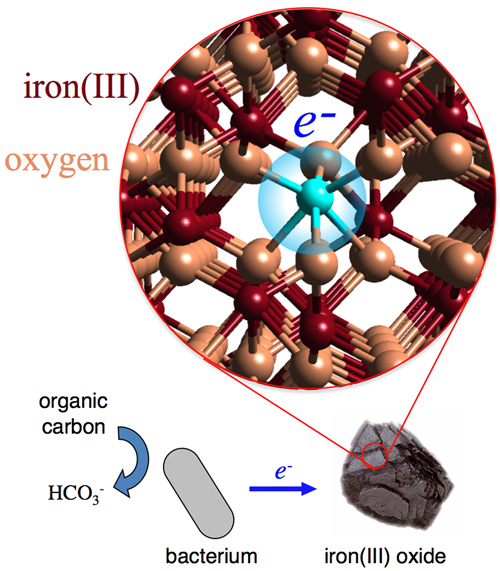 Iron oxide (rust) is a poor electrical conductor, but electrons in iron oxide can use thermal energy to hop from one iron atom to another. A Berkeley Lab experiment has now revealed exactly what happens to electrons after being transferred to an iron oxide particle. (Image courtesy of Benjamin Gilbert, Berkeley Lab)

At the macroscale, rocks and mineral don’t appear to be very reactive – consider the millions of years it takes for mountains to react with water. At the nanoscale, however, many common minerals are able to undergo redox reactions – exchange one or more electrons – with other molecules in their environment, impacting soil and water, seawater as well as fresh. Among the most critical of these redox reactions is the formation or transformation of iron oxide and oxyhydroxide minerals by charge-transfer processes that cycle iron between its two common oxidation states iron(III) and iron(II).

“Because iron(II) is substantially more soluble than iron(III), reductive transformations of iron(III) oxide and oxyhydroxide minerals can dramatically affect the chemistry and mineralogy of soils and surface,” Gilbert says. “In the case of iron(III) oxide, the reduction to iron(II) can cause mineral dissolution on a very fast timescale that changes the mineralogy and water flow pathways. There can also be a mobilization of iron into solution that can provide an important source of bioavailable iron for living organisms.” 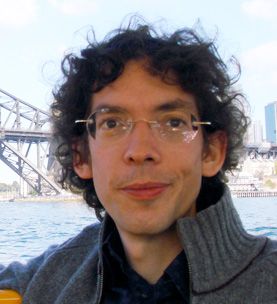 Gilbert also noted that many organic and inorganic environmental contaminants can exchange electrons with iron oxide phases. Whether it is iron(III) or iron(II) oxide is an important factor for degrading or sequestering a given contaminant. Furthermore, certain bacteria can transfer electrons to iron oxides as part of their metabolism, linking the iron redox reaction to the carbon cycle. The mechanisms that direct these critical biogeochemical outcomes have remained unclear because mineral redox reactions are complex and involve multiple steps that take place within a few billionths of a second. Until recently these reactions could not be observed, but things changed with the advent of synchrotron radiation facilities and ultrafast X-ray spectroscopy.

“Much like a sports photographer must use a camera with a very fast shutter speed to capture an athlete in motion without blurring, to be able to watch electrons moving, we needed to use a exceedingly short and very bright (powerful) pulse of X-rays,” says Jordan Katz, the lead author on the Science paper who is now with Denison University. “For this study, the X-rays were produced at Argonne National Laboratory’s Advanced Photon Source.”

In addition to short bright pulses of X-rays, Katz said he and his co-authors also had to design an experimental system in which they could turn on desired reactions with an ultrafast switch.

“The only way to do that on the necessary timescale is with light, in this case an ultrafast laser,” Katz says. “What we needed was a system in which the electron we wanted to study could be immediately injected into the iron oxide in response to absorption of light. This allowed us to effectively synchronize the transfer of many electrons into the iron oxide particles so that we could monitor their aggregate behavior.” 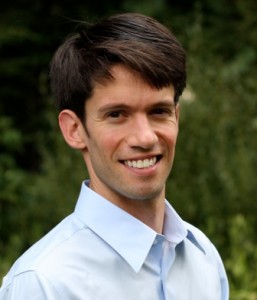 Jordan Katz, now with Denison University, designed an experimental system that synchronized the transfer of many electrons into iron oxide particles so their aggregate behavior could be monitored. Image credit: Berkeley Lab

With their time-resolved pump-probe spectroscopy system in combination with ab initio calculations performed by co-author Kevin Rosso of the Pacific Northwest National Laboratory, Gilbert, Katz and their colleagues determined that the rates at which electrons hop from one iron atom to the next in an iron oxide varies from a single hop per nanosecond to five hops per nanosecond, depending on the structure of the iron oxide. Their observations were consistent with the established model for describing electron behavior in materials such as iron oxides. In this model, electrons introduced into an iron oxide couple with phonons (vibrations of the atoms in a crystal lattice) to distort the lattice structure and create small energy wells or divots known as polarons.

“These electron small polarons effectively form a localized lower-valence metal site, and conduction occurs through thermally-activated electron hopping from one metal site to the next,” Gilbert says. “By measuring the electron hopping rates we were able to experimentally demonstrate that iron(II) detachment from the crystal is rate-limiting in the overall dissolution reaction. We were also able to show that electron hopping in the iron oxides is not a bottleneck for the growth of microbes that use these mineral as electron acceptors. The protein-to-mineral electron transfer rate is slower.”

Katz is excited about the application of these results to finding ways to use iron oxide for solar energy collection and conversion.

“Iron oxide is a semiconductor that is abundant, stable and environmentally friendly, and its properties are optimal for absorption of sunlight,” he says. “To use iron oxide for solar energy collection and conversion, however, it is critical to understand how electrons are transferred within the material, which when used in a conventional design is not highly conductive. Experiments such as this will help us to design new systems with novel nanostructured architectures that promote desired redox reactions, and suppress deleterious reactions in order to increase the efficiency of our device.”

This research was supported by the U.S. Department of Energy’s Office of Science, which also supports the Advanced Photon Source.