A new study into how the world’s highest flying bird, the bar-headed goose, is able to survive at extreme altitudes may have future implications for low oxygen medical conditions in humans.

An international team of scientists recently tracked the bar-headed goose while it migrated across the Himalayas. Now they have shown how these birds are able to tolerate running at top speed while breathing only 7% oxygen.

Exercising at high altitude is a massive challenge since at the top of the highest mountains the air is only made up of 7% oxygen, compared with 21% at sea level. This is why human climbers often use supplemental oxygen when scaling the world’s tallest peaks.

Dr Lucy Hawkes of the University of Exeter led the study, along with colleagues Dr Charles Bishop (Bangor University) and Prof. Pat Butler (University of Birmingham). They tested how good the geese were at coping with exercise in reduced oxygen environments by simulating the conditions of Mount Everest in a clear box and then getting the birds to run as fast as possible on a treadmill inside the box. 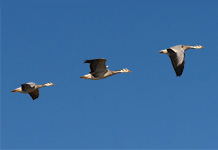 They discovered that the geese had a remarkable tolerance of low oxygen conditions – at rest and while they were exercising for 15 minutes at top speed – at oxygen levels that would render most humans completely immobile. The researchers also conducted the experiments with the barnacle goose, which migrates at sea-level, and found that they did not have the same ability in low oxygen conditions.

Dr Lucy Hawkes, of the Centre for Ecology and Conservation at the University of Exeter’s Penryn Campus, said: “It all seems to come down to how much oxygen bar-headed geese can supply to their heart muscles. The more they can supply, the faster they can beat their hearts and keep the supply of oxygen to the rest of the body going. This suggests that other species, including humans, are limited more by what our hearts can do than by how fit the rest of our muscles are at altitude.”

Dr Hawkes, formerly of Bangor University, added: “The wider implications of these findings are for low oxygen medical conditions in humans, such as heart attack and stroke – suggesting what adaptations might help prevent problems in the first place and learning how animals have managed to cope with really extreme environments.”

Bar-headed geese and barnacle geese undertake similar long distance migratory flights between breeding and wintering grounds, usually covering thousands of miles, during the autumn and spring. Bar-headed geese travel from Indian wintering grounds and high Asian breeding grounds in China and Mongolia, which means that they have to cross the Himalayan Mountains en route while flying as high as 7,290m (23,917ft).

The animals have been shown to possess a number of specific physiological adaptations that may increase their performance relative to other species of geese when exposed to severe environmental hypoxia (inadequate oxygen supply).  In particular, their heart and locomotor muscles contain more blood vessels.

The study received funding from the Biotechnology and Biological Sciences Research Council (BBSRC).