Rising Oceans – Too Late to Turn the Tide?

*Melting ice sheets contributed much more to rising sea levels than thermal expansion of warming ocean waters during the Last Interglacial Period, a UA-led team of researchers has found. The results further suggest that ocean levels continue to rise long after warming of the atmosphere levels off.*

Thermal expansion of seawater contributed only slightly to rising sea levels compared to melting ice sheets during the Last Interglacial Period, a University of Arizona-led team of researchers has found.

The study combined paleoclimate records with computer simulations of atmosphere-ocean interactions and the team’s co-authored paper is accepted for publication in Geophysical Research Letters.

As the world’s climate becomes warmer due to increased greenhouse gases in the atmosphere, sea levels are expected to rise by up to three feet by the end of this century.

But the question remains: How much of that will be due to  ice sheets melting as opposed to the oceans’ 332 billion cubic miles of water increasing in volume as they warm up? 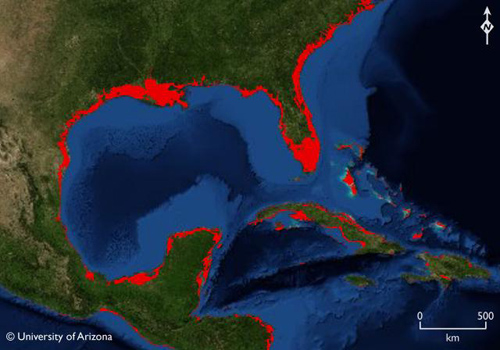 If sea levels rose to where they were during the Last Interglacial Period, large parts of the Gulf of Mexico would be under water (red areas), including half of Florida and several Caribbean islands. (Photo illustration by Jeremy Weiss)

For the study, UA team members analyzed paleoceanic records of global distribution of sea surface temperatures of the warmest 5,000-year period during the Last Interglacial, a warm period that lasted from 130,000 to 120,000 years ago.

The researchers then compared the data to results of computer-based climate models simulating ocean temperatures during a 200-year snapshot as if taken 125,000 years ago and calculating the contributions from thermal expansion of sea water.

The team found that thermal expansion could have contributed no more than 40 centimeters – less than 1.5 feet – to the rising sea levels during that time, which exceeded today’s level up to eight meters or 26 feet.

At the same time, the paleoclimate data revealed average ocean temperatures that were only about 0.7 degrees Celsius, or 1.3 degrees Fahrenheit, above those of today.

“This means that even small amounts of warming may have committed us to more ice sheet melting than we previously thought. The temperature during that time of high sea levels wasn’t that much warmer than it is today,” said Nicholas McKay, a doctoral student at the UA’s department of geosciences and the paper’s lead author.

McKay pointed out that even if ocean levels rose to similar heights as during the Last Interglacial, they would do so at a rate of up to three feet per century.

“Even though the oceans are absorbing a good deal of the total global warming, the atmosphere is warming faster than the oceans,” McKay added. “Moreover, ocean warming is lagging behind the warming of the atmosphere. The melting of large polar ice sheets lags even farther behind.”

They are absorbing most of that heat, but they lag behind. Especially the large ice sheets are not in equilibrium with global climate,” McKay added. “

Jonathan Overpeck, co-director of the UA’s Institute of the Environment and a professor with joint appointments in the department of geosciences and atmospheric sciences, said: “This study marks the strongest case yet made that humans – by warming the atmosphere and oceans – are pushing the Earth’s climate toward the threshold where we will likely be committed to four to six or even more meters of sea level rise in coming centuries.”

Overpeck, who is McKay’s doctoral advisor and a co-author of the study, added: “Unless we dramatically curb global warming, we are in for centuries of sea level rise at a rate of up to three feet per century, with the bulk of the water coming from the melting of the great polar ice sheets – both the Greenland and Antarctic Ice Sheets.”

According to the authors, the new results imply that 4.1 to 5.8 meters, or 13.5 to 19 feet, of sea level rise during the Last Interglacial period was derived from the Antarctic Ice Sheet, “reemphasizing the concern that both the Antarctic and Greenland Ice Sheets may be more sensitive to warming temperatures than widely thought.”

“The central question we asked was, ‘What are the warmest 5,000 years we can find for all these records, and what was the corresponding sea level rise during that time?'” McKay said.

Evidence for elevated sea levels is scattered all around the globe, he added. On Barbados and the Bahamas, for example, notches cut by waves into the rock six or more meters above the present shoreline have been dated to being 125,000 years old.

“Based on previous studies, we know that the sea level during the Last Interglacial was up to 8.5 meters higher than today,” McKay explained.

“We already knew that the vast majority came from the melting of the large ice sheets in Greenland and Antarctica, but how much could the expansion of seawater have added to that?”

Given that sea surface temperatures were about 0.7 degrees warmer than today, the team calculated that even if the warmer temperatures reached all the way down to 2,000 meters depth – more than 6,500 feet, which is highly unlikely – expansion would have accounted for no more than 40 centimeters, less than a foot and a half.

“That means almost all of the substantial sea level rise in the Last Interglacial must have come from the large ice sheets, with only a small contribution from melted mountain glaciers and small ice caps,” McKay said.

According to co-author Bette Otto-Bliesner, senior scientist at the National Center for Atmospheric Research (NCAR) in Boulder, Colo., getting the same estimate of the role ocean expansion played on sea level rise increases confidence in the data and the climate models.

“The models allow us to attribute changes we observe in the paleoclimate record to the physical mechanisms that caused those changes,” Otto-Bliesner said. “This helps tremendously in being able to distinguish mere correlations from cause-and-effect relationships.”

The authors cautioned that past evidence is not a prediction of the future, mostly because global temperatures during the Last Interglacial were driven by changes in the Earth’s orbit around the sun. However, current global warming is driven by increasing greenhouse gas concentrations.

The seasonal differences between the northern and the southern hemispheres were more pronounced during the Last Interglacial than they will be in the future.

“We expect something quite different for the future because we’re not changing things seasonally, we’re warming the globe in all seasons,” McKay said.

“The question is, when we think about warming on a global scale and contemplate letting the climate system change to a new warmer state, what would we expect for the ice sheets and sea levels based on the paleoclimate record? The Last Interglacial is the most recent time when sea levels were much higher and it’s a time for which we have lots of data,” McKay added.

“The message is that the last time glaciers and ice sheets melted, sea levels rose by more than eight meters. Much of the world’s population lives relatively close to sea level. This is going to have huge impacts, especially on poor countries,” he added.

“If you live a meter above sea level, it’s irrelevant what causes the rise. Whether sea levels are rising for natural reasons or for anthropogenic reasons, you’re still going to be under water sooner or later.”