Rise in Global Temperatures and Extinction of the Lizards

For many lizards, global climate change is a matter of life and death.

An extinction model based on this discovery also forecasts a grim future for these ecologically important critters, predicting that a full 20 percent of all lizard species could be extinct by the year 2080.

The detailed surveys of lizard populations in Mexico, collected from 200 different sites, indicate that the temperatures in those regions have changed too rapidly for the lizards to keep pace.

It seems that all types of lizards are far more susceptible to climate-warming extinction than previously thought because many species are already living right at the edge of their thermal limits, especially at low elevation and low latitude range limits.

Although the researchers’ prediction for 2080 could change if humans are able to slow global climate warming, it does appear that lizards have crossed a threshold for extinctions—and that their sharp decline will continue for decades at least. 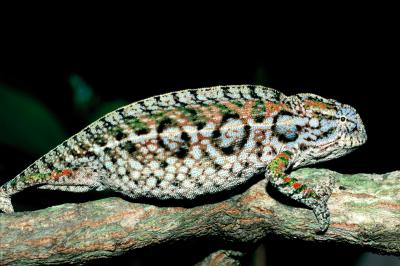 About the image above: Madagascar is a hotspot of extinctions (21 percent local extinctions) and members of the Chamaeleonidae family (Pictured here: Furcifer lateralis) are currently going extinct. Photo by – Ignacio De la Riva.

Barry Sinervo from the Department of Ecology and Evolutionary Biology at the University of California in Santa Cruz, along with colleagues from across the globe, reached these conclusions after comparing their field studies of the lizards in Mexico with extensive data from around the world. Their research has been published in the May 14 issue of Science, the peer-reviewed journal published by AAAS, the nonprofit science society.

After compiling the global field data, Sinervo and his colleagues studied the effects of rising temperatures on lizards’ bodies, and created a model of extinction risks for various lizard species around the world.

Their model accurately predicted specific locations on five continents where populations of lizards have recently gone extinct, and it might inform researchers on how these patterns of extinction will continue in the future. 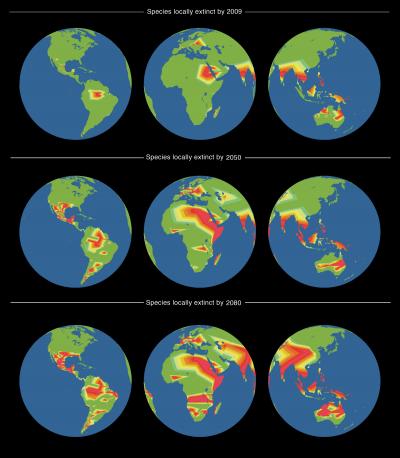 About the image above: Global maps of observed local extinctions in 2009, and projections for 2050 and 2080 based on geographic distributions of lizard families of the world. Credit: Barry Sinervo.

According to the researchers’ global model, which is derived from today’s trends of carbon dioxide emissions from human activities, about six percent of lizard species are due for extinction by the year 2050.

Since carbon dioxide hangs around in the atmosphere for decades, the researchers say that this statistic can no longer be avoided. However, they do say that concentrated global efforts to reduce carbon dioxide in the atmosphere could possibly avert the 2080 scenarios, in which 20 percent of lizard species are expected to disappear from the planet.

The detailed study notes specifically that lizards that bear live young are particularly at risk of extinction, compared to those that lay eggs.

“We are literally watching these species disappear before our eyes.”

Sinervo began focusing his attention on lizard extinctions after he noticed an obvious trend during his field work in France.

He identified an unsettling pattern of lizard extinctions with French researchers, Jean Clobert and Benoit Heulin, while they were surveying some of their well-documented populations.

Disturbed by their findings, they contacted colleagues around the world—Jack Sites and Donald Miles in the United States, Fausto Méndez-de-la-Cruz in Mexico, and Carlos Frederico Duarte Rocha in Brazil—and a global collaboration ensued.

“This work is a fine example of interdisciplinary science and international collaboration, using methods and data from a range of scientific disciplines to improve confidence in the prediction of the biological effects of contemporary climate change, and in particular showing how long-term records and research are so crucial to the understanding of ecological change,” said Andrew Sugden, the International Managing Editor of Science.

“We would never have been able to do this without certain free, online tools like Google Scholar and Google Earth,” Sinervo said.

“It took us awhile to pinpoint the appropriate search terms. But once we did, we locked onto key published studies. I was surprised at how fast researchers began sending us data… That’s what happens though: When scientists see a problem, with global evidence backing it, they come together.”

In order to fine-tune their model with this surprising global outpouring of data, Sinervo and his colleagues used a small electronic device that mimics the body temperature of a lizard basking in the sun.

They placed these thermal models in sun-drenched areas for four months at sites in Mexico where lizard populations were still thriving—and at sites where they have already gone extinct.

“There are periods of the day when lizards can’t be out, and essentially have to retreat to cooler places,” Sinervo said.

“When they’re not out and about, lizards aren’t foraging for food. So we assessed how many hours of the day lizards would have been driven out of the sun at these different locations. Then, we were able to parameterize our global model.”

For the authors, who claim a deep appreciation for these lizards and the important role the reptiles play in the global food chain, these findings are both “devastating and heart-wrenching.” But, they say, hope does remain for the world’s lizards.

“If the governments of the world can implement a concerted change to limit our carbon dioxide emissions, then we could bend the curve and hold levels of extinction to the 2050 scenarios,” Sinervo concluded.

“But it has to be a global push… I don’t want to tell my child that we once had a chance to save these lizards, but we didn’t. I want to do my best to save them while I can.”