ANN ARBOR, Mich.— Brain scans showing neural reactions to pro-health messages can predict if you’ll keep that resolution to quit smoking more accurately than you yourself can. That’s according to a new study forthcoming in Health Psychology, a peer-reviewed journal.

“We targeted smokers who were already taking action to quit,” said Emily Falk, the lead author of the study and director of the Communication Neuroscience Laboratory at the U-M Institute for Social Research and Department of Communication Studies. “And we found that neural activity can predict behavior change, above and beyond people’s own assessment of how likely they are to succeed.

“These results bring us one step closer to the ability to use functional magnetic resonance imaging (fMRI) to select the messages that are most likely to affect behavior change both at the individual and population levels. It seems that our brain activity may provide information that introspection does not.” 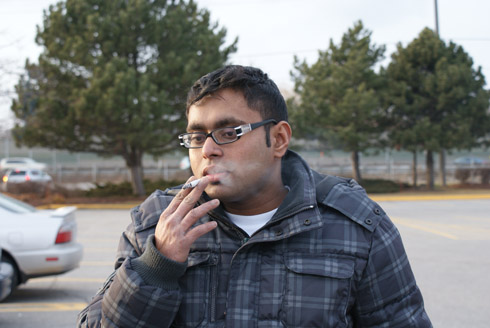 For the study, funded by the National Institutes of Health and the National Science Foundation, Falk and colleagues Matthew Lieberman, Elliot Berkman and Danielle Whalen tested 28 heavy smokers, recruited from an anti-smoking program. Each person completed a questionnaire on their smoking history, degree of nicotine dependence, cravings and intentions to quit. Each was also tested for exhaled carbon monoxide (CO), a measure of recent smoking.

While participants were in an fMRI scanner, the researchers showed a series of television ads designed to help people quit smoking. The ads were produced by a variety of public health agencies and foundations including the California Department of Public Health and the American Legacy Foundation.

After seeing each ad, participants rated how it affected their intention to quit, whether it increased their confidence about quitting, and how much they related to the message. A month after the scan, researchers contacted participants to see how they were doing and to obtain biological verification of how much they were smoking, by assessing their CO levels.

Participants reported smoking an average of five cigarettes a day, compared with an average of 21 a day at the start of the study, and CO levels were consistent with these self-reports. But there was considerable variability in how successful participants were in achieving the goal.

The researchers compared the smokers’ behavior change from the start to the end of the study with neural activity in a particular brain region that the team’s previous research had suggested is predictive of behavior change—the medial prefrontal cortex. Neural activity in this region of the brain was significantly linked to reductions in smoking behavior over the month following the scan, predicting how successful people would be in reducing their smoking.

“What is exciting is that by knowing what is going on in someone’s brain during the ads, we can do twice as well at predicting their future behavior, compared to if we only knew their self-reported estimate of how successful they would be or their intention to quit,” Falk said.

Interestingly, many of the ads that did not seem immediately relevant to participants at the time of the scan emerged as the most highly recalled during the month that people tried to quit smoking.

“It is possible that the brain activity we are observing predicts behavior change that is not predicted by people’s self-reports, because it is tapping into something that people aren’t consciously aware of when they initially see the ads,” Falk said.

Falk is also affiliated with the U-M Department of Psychology. Co-authors include psychologists Lieberman and Whalen of University of California, Los Angeles, and Berkman of the University of Oregon. The study was conducted at UCLA as part of Falk’s and Berkman’s doctoral dissertations, advised by Lieberman.