Researchers Suggest A Proximate Cause of Cancer

AUSTIN, TX — Researchers from The University of Texas at Austin’s Department of Chemical Engineering are the first to show that mechanical property changes in cells may be responsible for cancer progression — a discovery that could pave the way for new approaches to predict, treat and prevent cancer.

Postdoctoral student Parag Katira and his adviser, Roger T. Bonnecaze, department chair in the Cockrell School of Engineering and T. Brockett Hudson Professor, worked with Muhammad Zaman of Boston University to devise a 3-D cancer model that shows the softening of cells and changes in cell binding cause cancerous behavior in cells. These mechanical property changes cause cells to divide uncontrollably — making them less likely to die and resulting in malignant tumor growth. The findings present a unique physics-based perspective on understanding cancer progression and were published recently in the American Physical Society’s journal Physical Review Letters. 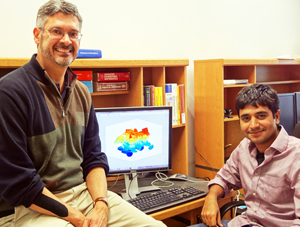 “To date, cancer research has focused on biochemical factors,” said Katira. “Instead of looking to solve numerous interdependent biochemical carcinogenic factors, we can now focus on a small number of mechanical factors. It’s a new approach.”

Cancers are caused by various genetic and carcinogenic factors, such as synthetic chemicals, radiation, the environment and physical stress. However, there is an uncanny similarity in mechanical property changes, such as degree of stiffness and ability to bind to other cells, that differentiate healthy and cancerous cells, as previously observed for several types of cancers.

The team’s computational model replicates the life cycle of cells within a tissue and is used to observe how mechanical property changes affect a cell’s behavior and fate within that tissue. The team started with a completely healthy tissue where all the cells had the same stiffness and binding ability, and then softened a small cluster of cells at the center of the tissue. As long as the number of softened cells was less than a critical value, the tissue remained stable and healthy.

Past this threshold, there was an increase in the multiplication rate of softer cells compared with healthy, stiffer cells. Beyond this point, tumors grew by replacing surrounding healthy tissue and displayed clinically observed characteristics of malignant tumors. The researchers also analyzed how a cell’s ability to bind, or stick, to other cells affected metastasis, or progression. They observed that changes in the inter-cellular binding ability of softened cells controlled the rate and form of growing tumors.

The researchers believe this model identifies a common physical mechanism by which various biochemical carcinogenic or genetic factors can drive cancer progression.

“We’re very excited about these results because they point to a unified understanding of cancer progression,” Bonnecaze said. “This understanding opens up new avenues for attacking cancer.”