Polar bears and Inuit communities have become victims in the public war of words on climate change and wildlife conservation, according to researchers from Britain and Canada.

University of Exeter geographer Dr Martina Tyrrell and Dr Doug Clark from the University of Saskatchewan’s School of Environment and Sustainability examined the fallout from a media campaign in the run-up to the March 2013 proposal to severely limit or prohibit trade in polar bears under the Convention on International Trade in Endangered Species of Wild Fauna and Flora (CITES).

Dr Tyrrell said: “By obscuring the root causes of the threats to polar bears, the likelihood of truly rational, feasible, and justifiable conservation actions for a warming Arctic may be receding just as fast as the region’s sea ice.” 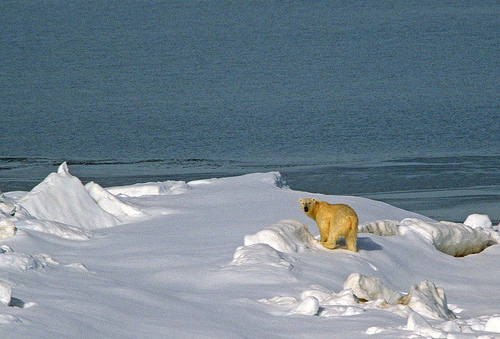 Their article examines the data used by animal welfare organisations in an attempt to sway public opinion regarding polar bear hunting.

By analysing the news coverage on the subject, the researchers suggest climate change-induced habitat loss was de-emphasised through an oversimplified view of commercial hunting, through the manipulation of numerical data, and through misleading narratives of impending extinction.

Dr Tyrrell added: “Parties on all sides are likely to have the best interests of polar bear populations at heart, but unfortunately only paying attention to one side of the issue places their future in greater jeopardy. An oversimplified emphasis on polar bear hunting diverts attention away from climate change-induced sea ice loss and from the realities of humans and animals sharing that habitat.”

In their paper, published in the latest issue of the journal Global Environmental Change, they also highlight the lack of consideration paid to ongoing and long-term polar bear conservation management practices and the potential economic and cultural impacts of a CITES ban on indigenous Inuit communities in the Canadian Arctic.

While the US-Russian-backed proposal to ban polar bear trade was not voted in by CITES delegates last year, the researchers expect the issue to come up again and are advising a more even-handed approach when it does.

“If we are going to come up with effective and appropriate multilateral conservation policies that can be acted upon and supported by the public, we need more nuanced conversations and media coverage about polar bear conservation,” added Dr Clark.