Scientists from the NOAA-funded Gulf of Maine Toxicity (GOMTOX) project issued an outlook for a moderate regional bloom of a toxic alga that can cause ‘red tides’ in the spring and summer of this year, potentially threatening the New England shellfish industry. However, there are signs this year’s bloom could be suppressed by recent changes in ocean conditions in the Gulf of Maine.

An abundant seed population in bottom sediments has set the stage for a moderate bloom of the toxic alga Alexandrium fundyense.  This organism swims in the water, and divides again and again to form a “bloom” or red tide, but it also produces dormant cells or cysts that fall to the ocean bottom at the end of these blooms where they remain until they germinate the next year to restart the process.

A cyst survey conducted in late 2010 shows a modest amount of cysts present in coastal sediments, not as high as the abundances prior to the major red tides of 2005 and 2008.  The 2011 bloom could be an intermediate case, falling somewhere in between the large blooms of 2005 and 2008, and more mild outbreaks in 2006 and 2007, according to Woods Hole Oceanographic Institution (WHOI) biologist Don Anderson, principal investigator of the GOMTOX study.  The historic 2005 bloom shut down shellfish beds from Maine to Martha’s Vineyard (Mass.) for several months, and the 2008 outbreak was similar in scale.  Toxicity was more limited during the blooms of 2006 and 2007, affecting much of the Maine and New Hampshire coasts, but with minimal closures in Massachusetts. 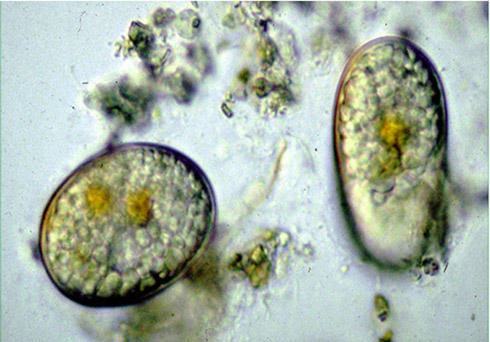 Cysts of Alexandrium fundyense, the algae notorious for producing a toxin that accumulates in clams, mussels, and other shellfish and can cause paralytic shellfish poisoning in humans who consume them. Image credit: Don Anderson, Woods Hole Oceanographic Institution

Although the algae in the water pose no direct threat to human beings, the toxins they produce can accumulate in filter-feeding organisms such as mussels and clams— which can cause paralytic shellfish poisoning (PSP) in humans who consume them. The economic impacts of PSP toxicity are significant in the region.  Direct and indirect costs of the 2005 Alexandrium bloom were estimated at nearly $50 million for Massachusetts and $23 million for Maine.

In order to protect public health, shellfish beds are closed when toxicities rise above a quarantine level, often during the peak harvesting season.  Due to effective monitoring by state agencies, there have been no illnesses from legally harvested shellfish in recent years, despite some severe blooms during that time period. There have been, however, several severe poisonings of individuals who ignored closure signs.

WHOI oceanographers Dennis McGillicuddy and Anderson, and North Carolina State University (NCSU) Prof. Ruoying He are several years along in the development of a computer model to predict the intensity and location of blooms of the toxic algae Alexandrium in the Gulf of Maine. The model is initiated from the cyst abundance maps, and simulates Alexandrium germination, growth and dispersal using each year’s winds, sunlight, rainfall, tides, and currents.

Scientists are reluctant to make a “forecast” of precisely where and when the regional bloom will make landfall because bloom transport depends on weather events that cannot be predicted months in advance. 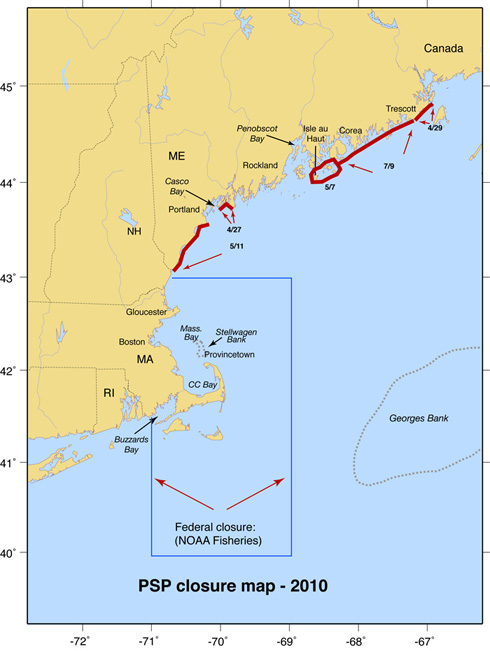 Shellfish closures along the New England coastline due to detection of PSP toxins during the 2010 bloom season. Issuance dates of these closures are indicated. (Compiled from information provided by the Maine Department of Marine Resources, New Hampshire Department of Environmental Services, and the Massachusetts Division of Marine Fisheries). Image credit: D. Anderson lab, Woods Hole Oceanographic Institution

“Our research has shown that cyst abundance in the fall is an indicator of the magnitude of the bloom in the following year,” said GOMTOX member McGillicuddy. “However, even if there is a large bloom offshore, certain wind patterns and ocean currents in the late spring and summer are needed to transport it onshore where it can affect coastal shellfish.”

Moreover, changing characteristics of water in the Gulf of Maine can have a direct effect on the growing conditions for Alexandrium.  For example, in 2010 near-surface coastal waters were warmer, fresher, and lower in nutrients than usual.  The GOMTOX team believes this suppressed what otherwise would have been a major regional bloom, which had in fact been forecast for that year.  Recent observations from NOAA’s Ecosystem Monitoring Program (EcoMon) surveys and Fisheries and Oceans Canada’s Atlantic Zone Monitoring Program (AZMP) indicate that similar water characteristics may occur in 2011, suggesting the bloom could be suppressed this year as it was in 2010.

Coastal exposure to the blooms is worst for scenarios in which the spring and summer weather is dominated by strong northeast winds, which tend to drive Alexandrium cells toward the New England coast. That occurred in 2009, when an unusual series of northeast winds in late June and early July led to prolonged closure of almost the entire Maine coast to shellfishing. In contrast, when southwesterlies dominate, the algae tend to stay offshore. 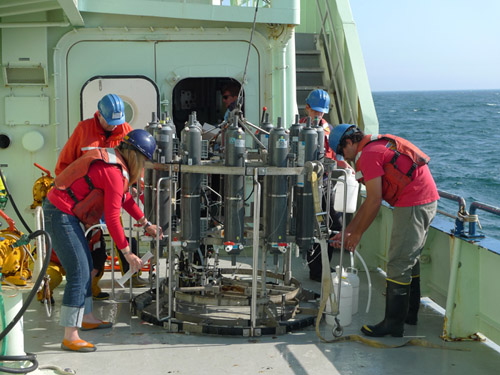 Clockwise, from near left, Stacy Knapp, Jeff Turner, Sara Handy, and Peter Milligan retrieve water samples from the CTD rosette. Those collections will be filtered and used to count the number of Alexandrium cells in each sample. Image courtesy of Stacy Knapp, Woods Hole Oceanographic Institution

“People deserve to know if their seafood is safe. Supporting research to prevent, control, forecast or mitigate the occurrence of harmful algal blooms and their impacts is one of the services NOAA provides to communities, managers and businesses in the Gulf of Maine,” said Jane Lubchenco, Ph.D., under secretary of commerce for oceans and atmosphere and NOAA administrator. “Advanced warnings like this one will help state agencies prepare for monitoring harmful algal blooms and assessing public health risks.”

GOMTOX researchers regularly share their field observations and models with more than 80 coastal resource and fisheries managers in six states as well as federal agencies like NOAA, the EPA, and the FDA. Realtime forecasts are updated on a weekly basis and additional information will be provided on the “Current Status” page of the Northeast PSP web site (https://www.whoi.edu/northeastpsp), particularly as new information becomes available from coastal ocean observing systems such as the Northeastern Regional Association of Coastal Ocean Observing Systems (NERACOOS), EcoMon, and AZMP.  The NWS is also providing extended hydrological and meteorological outlooks to accompany the bloom forecasts.

“Red tide is a chronic problem in the Gulf of Maine, and states have limited resources to handle it,” said Darcie Couture, director of Biotoxin Monitoring for the Maine Department of Marine Resources.  Managers believe that a regional-scale, seasonal outlook can be useful in preparing for contingencies. This advanced warning, along with updates closer to and during the red tide season, can help state agencies prepare for monitoring red tides and assessing public health risks, and also give shellfish farmers and fishermen the opportunity to shift the timing of their harvest or postpone plans for seeding of aquaculture beds.  Area restaurants may also benefit from advance warnings by making contingency plans for seafood supplies during the summer. In 2010, the forecast led to early monitoring of shellfish beds in Maine, resulting in the detection of levels of toxicity that forced the closure of portions of Casco Bay several weeks earlier than normal  –  potentially avoiding human illnesses.

The GOMTOX project, funded by NOAA’s Ecology and Oceanography of Harmful Algal Blooms (ECOHAB) Research Program, is a collaboration of investigators from NOAA’s National Ocean Service, National Weather Service and National Marine Fisheries Service, WHOI, NCSU, University of Maine, University of Massachusetts Dartmouth, Rutgers University, the FDA, the Canadian Department of Fisheries and Oceans, Maine Department of Marine Resources, New Hampshire Department of Environmental Services, Massachusetts Division of Marine Fisheries, and the North Atlantic Clam Association.  Other support for Alexandrium studies in the Gulf of Maine is provided by the NIH and the NSF through the Woods Hole Center for Oceans and Human Health.