*Known as the sugarcane of the desert, sweet sorghum could be a sustainable and ecological future biofuel crop for Arizona.*

Researchers in the University of Arizona’s department of agricultural and biosystems engineering recently reaped the reward of six years of planning, testing and trials and harvested 40 acres of experimental sweet sorghum at the UA College of Agriculture and Life Sciences’ Red Rock Agricultural Research Center.

Known as the sugarcane of the desert, sweet sorghum could be a sustainable and ecological future biofuel crop for Arizona – and there will be one, said Dennis Ray, a plant geneticist in the UA’s College of Agriculture and Life Sciences: “There’s no doubt that we’re going to have biofuels in the future because no matter what, petroleum is a finite resource.” 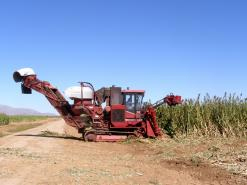 A harvester moves down a row of sorghum at the UA College of Agriculture and Life Sciences' Red Rock Agricultural Research Center in Marana, Ariz. (Photo by Don Slack)

As versatile in their function and application as traditional fuels, biofuels developed from biomass such as sugar or grain crops or algae could become widely used in the future as a source of power for a range of technologies, including homes, automobiles, industrial factories and airplane engines.

“We first started working with sweet sorghum about five or six years ago,” said Don Slack, a professor in the UA’s department of agricultural and biosystems engineering and co-principle investigator of the sorghum project along with Colin Kaltenbach, who is vice dean of the UA’s College of Agriculture and Life Sciences and director of the Arizona Agricultural Experiment Station.

“In the fall of 2009 we got a large grant from the Department of Energy for a sweet sorghum alternative fuel and feed pilot project.” 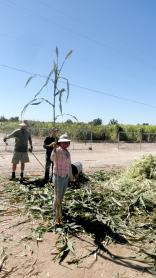 Master's student Tania E. Martinez-Cruz holds up a sorghum stalk roughly twice her size. The grass grows to between 3-4 meters in about 110-120 days. (Photo by Don Slack)

Why sorghum? “It’s a drought-tolerant, salt-tolerant, tough crop,” said Slack. “Sorghum would be a preferred crop in a hot, arid region.” This autumn, the researchers reaped their most successful harvest to date, gathering 16 plots worth of four different varieties of sorghum.

Said Slack: “This year we’re looking at four different varieties: The traditional one, which is the M81E developed at Mississippi State University in 1981. It’s very photosensitive, which means that the planting date doesn’t make any difference with respect to the harvest date. It matures at about the same time.”

“We started working with a company called ADVANTA, which is a seed company that is breeding and selling sorghum, and they’re specifically working on energy sorghum, sweet sorghum for biomass and juice. They gave us three different day-neutral varieties, which means the length of the day does not affect the maturation of the crop.”

For example, the M81E ripens in November regardless of whether it is planted in May or June. “When the days get short, it flowers and ripens,” said Slack. “The day-neutral variety would mature purely according to the temperature.”

“We bought a sugarcane harvester to do the harvesting,” said Slack. “It’s a pretty impressive machine. It cuts the tops off of the sorghum and blows all the leaves away, and cuts it into four – 12-inch billets.” Billets are short, rod-like sections of the stalks of the plant being harvested.

“We also leased a small mill from the same sugarcane company in Louisiana,” said Slack. 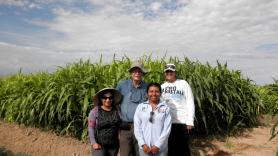 Sweet sorghum is easier to process into ethanol than corn or other grain crops. Ethanol is produced from grain crops in two essential steps: First, starch contained in the plants’ stalks must be broken down into sugars. The sugars then are fermented into ethanol by yeast in a similar process to how beer is made. When juiced, sorghum stalks yield sugars instead of starch, thus eliminating the first step of the conversion process for grain crops.

The juice from the sorghum billets is sent to a nearby refinery to be converted into ethanol. “They’re very happy with the juice that we send up because it ferments in about a third of the time that it takes to ferment their corn mash,” said Slack. “It takes them 60 hours to ferment their corn, and it’s taken less than 24 hours for them to ferment our sorghum juice.”

When it comes to developing a biofuel industry based on sugar-producing crops such as sweet sorghum, Arizona – and much of the desert Southwest – has what it takes.

Sunlight enables crops to grow year-round, and fields in the Southwest thrive during the wintery off-seasons experienced by colder parts of the country. For example, 95 percent of the U.S.’ homegrown winter vegetables come from Yuma County in western Arizona. “Nowhere else can grow vegetables during that time of the year,” said Mark Riley. 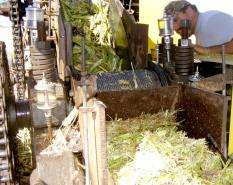 Billets of sorghum are crushed into the cellulose material. (Photo by Don Slack)

The extended growing season of the Southwest provides a niche to produce biofuel crops off-sequence from when other parts of the country are growing corn, said Riley. Biofuels could not only provide an ecological source of fuel for the future, but also could create a sustainable industry for Arizona and the desert Southwest.

Said Ray: “We’re looking at rural development. If you have a little industry in this area, you need people to run the processing plant. That means jobs. That means bringing money back into these communities. It’s always a much bigger picture for what we’re looking at in the long run.”

While crops in Arizona may benefit from comparatively mild winters, they must be able to contend with the lack of water that goes hand in hand with the warmer climate. And perhaps none is better suited to grow well in arid environments than sweet sorghum.

“In addition to looking at the maturation rates of different varieties, she’s looking at the water requirements as well and the main thrust of her study is to see how much water each variety requires and how well it responds to stress,” said Slack.

Since sweet sorghum is not intended for human consumption, it can be irrigated with treated wastewater, which saves on both water usage and fertilizers, as it provides many of the nutrients the crop needs.

Of course, the harvest is not without setbacks. “We are typically getting in our harvest now a brix reading of 15-18, which means 15-18 percent is sugar,” said Slack. “When they convert the starch in corn into sugar, which they have to do before they can refine it, they have brix of 25-30.”

And all learning is progress. The scientists already are refining their plans for next year’s experimental sorghum harvest.

“We would like to have one or more varieties that would allow us to have staggered planting and staggered harvest dates,” said Slack. “The juice doesn’t keep very well; we can’t store it. So we’d like to be able to harvest it directly and continuously provide it to the energy plant over time without storing it.”

The sorghum harvest is part of a multidisciplinary effort at the UA to develop sustainable biofuel crops for Arizona and the desert Southwest. The sorghum-harvesting project is funded by the U.S. Department of Energy and Martinez-Cruz’s research is funded by the Cecil H. Miller, Jr. Families endowment.

“The goal of the project, of all these projects, is to have a commercial product,” said Ray. “The end goal is to give back to folks who have given to us through funding and in other ways.”