Using advanced computers and a computational technique to simulate physical processes at the atomic level, researchers at Brown University have predicted that a material made from hafnium, nitrogen, and carbon would have the highest known melting point, about two-thirds the temperature at the surface of the sun.

The computations, described in the journal Physical Review B (Rapid Communications), showed that a material made with just the right amounts of hafnium, nitrogen, and carbon would have a melting point of more than 4,400 kelvins (7,460 degrees Fahrenheit). That’s about two-thirds the temperature at the surface of the sun, and 200 kelvins higher than the highest melting point ever recorded experimentally. 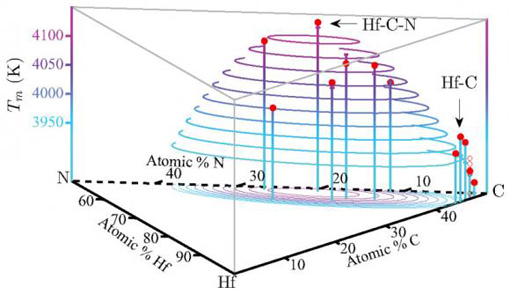 Compounds made from hafnium and carbon have some of the highest known melting points. Using computer simulations, Brown University engineers predict that a material made with hafnium, nitrogen, and carbon will have a higher melting point than any known material. Image credit: Van de Walle lab/Brown University

The experimental record-holder is a substance made from the elements hafnium, tantalum, and carbon (Hf-Ta-C). But these new calculations suggest that an optimal composition of hafnium, nitrogen, and carbon — HfN0.38C0.51 — is a promising candidate to set a new mark. The next step, which the researchers are undertaking now, is to synthesize the material and corroborate the findings in the lab.

“The advantage of starting with the computational approach is we can try lots of different combinations very cheaply and find ones that might be worth experimenting with in the lab,” said Axel van de Walle, associate professor of engineering and co-author of the study with postdoctoral researcher Qijun Hong. “Otherwise we’d just be shooting in the dark. Now we know we have something that’s worth a try.” 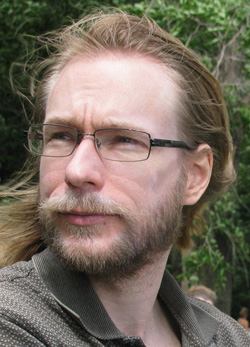 Axel van de Walle. “The advantage of starting with the computational approach is we can try lots of different combinations very cheaply and find ones that might be worth experimenting with in the lab.” Image credit: Brown University

The researchers used a computational technique that infers melting points by simulating physical processes at the atomic level, following the law of quantum mechanics. The technique looks at the dynamics of melting as they occur at the nanoscale, in blocks of 100 or so atoms. It’s more efficient than traditional methods, but still computationally demanding due to the large number of potential compounds to test. The work was done using the National Science Foundation’s XSEDE computer network and Brown’s “Oscar” high-performance computer cluster.

Van de Walle and Hong started by analyzing the Hf-Ta-C material for which the melting point had already been experimentally determined. The simulation was able to elucidate some of the factors that contribute to the material’s remarkable heat tolerance.

The work showed that Hf-Ta-C combined a high heat of fusion (the energy released or absorbed when it transitions from solid to liquid) with a small difference between the entropies (disorder) of the solid and liquid phases. “What makes something melt is the entropy gained in the process of phase transformation,” van de Walle explained. “So if the entropy of the solid is already very high, that tends to stabilize the solid and increase the melting point.”

The researchers then used those findings to look for compounds that might maximize those properties. They found that a compound with hafnium, nitrogen, and carbon would have a similarly high heat of fusion but a smaller difference between the entropies of the solid and the liquid. When they calculated the melting point using their computational approach, it came out 200 kelvins higher than the experimental record.

Van de Walle and Hong are now collaborating with Alexandra Navrotsky’s lab at the University of California–Davis to synthesize the compound and perform the melting point experiments. Navrotksy’s lab is equipped for such high-temperature experiments.

The work could ultimately point toward new high-performance materials for a variety of uses, from plating for gas turbines to heat shields on high-speed aircraft. But whether the HfN0.38C0.51 compound itself will be a useful material isn’t clear, van de Walle says.

“Melting point isn’t the only property that’s important [in material applications],” he said. “You would need to consider things like mechanical properties and oxidation resistance and all sorts of other properties. So taking those things into account you may want to mix other things with this that might lower the melting point. But since you’re already starting so high, you have more leeway to adjust other properties. So I think this gives people an idea of what can be done.”

The work also demonstrates the power of this relatively new computational technique, van de Walle says. In recent years, interest in using computation to explore the material properties of a large number of candidate compounds has increased, but much of that work has focused on properties that are far easier to compute than the melting point.

“Melting point is a really difficult prediction problem compared to what has been done before,” van de Walle said. “For the modeling community, I think that’s what is special about this.”

The work was supported by the U.S. Office of Naval Research (N00014-12-1-0196 and N00014-14-1-0055) and by Brown University through the use of the facilities at its Center for Computation and Visualization. The Extreme Science and Engineering Discovery Environment (XSEDE), which was used in this study, is supported by National Science Foundation Grant No. ACI-1053575.