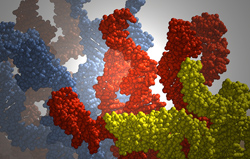 This image is a simulation snapshot of the molecular dynamics of DNA strands. Image credit: North Carolina State University

Researchers from North Carolina State University have found a way to optimize the development of DNA self-assembling materials, which hold promise for technologies ranging from drug delivery to molecular sensors. The key to the advance is the discovery of the “Goldilocks” length for DNA strands used in self-assembly – not too long, not too short, but just right.

DNA strands contain genetic coding that will form bonds with another strand that contains a unique sequence of complementary genes. By coating a material with a specific DNA layer, that material will then seek out and bond with its complementary counterpart. This concept, known as DNA-assisted self-assembly, creates significant opportunities in the biomedical and materials science fields, because it may allow the creation of self-assembling materials with a variety of applications.

But, while DNA self-assembly technology is not a new concept, it has historically faced some significant stumbling blocks. One of these obstacles has been that DNA segments that are too short often failed to self-assemble, while segments that are too long often led to the creation of deformed materials. This hurdle can lead to basic manufacturing problems, as well as significant changes in the properties of the material itself.

A team of researchers from NC State and the University of Melbourne have proposed a solution to this problem, using computer simulations of DNA strands to identify the optimal length of a DNA strand for self-assembly – and explaining the scientific principles behind it (see video below).

“Strands that are too short or long form self-protected motifs,” says Dr. Yara Yingling, an assistant professor of materials science and engineering at NC State and co-author of a paper describing the research. That means that the strands bond to each other, rather than to  “partner” materials.

“The optimal lengths are not long enough to intertwine with each other, and are not short enough to fold over on themselves,” Yingling explains. That leaves them exposed, and available to bond with the materials in another layer – the perfect situation for DNA self-assembly.

One potential application for such self-assembling materials is the development of drug-delivery vehicles. For example, researchers at the University of Melbourne have created self-assembling DNA capsules that are fully biocompatible, biodegradable and capable of releasing the drug when they come in contact with a specific physical stimulus – making them ideal for drug delivery.

DNA self-assembly technology is also expected to facilitate the creation of molecular sensors that use DNA to detect, and signal the presence of, clinically important biological molecules – which could have significant diagnostic applications in the medical field.

“We’re now planning to explore additional factors that play a role in DNA self-assembly,” Yingling says, “including temperature, genetic sequence and the environment in which the assembly takes place.”

The paper, “Effect of Oligonucleotide Length on the Assembly of DNA Materials: Molecular Dynamics Simulations of Layer-by-Layer DNA Films,” was published online Oct. 12 by the journal Langmuir. Lead author of the paper is Abhishek Singh, a Ph.D. student at NC State. Co-authors include Yingling; former NC State post-doctoral research associate Dr. Stacy Snyder; and Drs. Frank Caruso, Lillian Lee and Angus Johnston of the University of Melbourne. The work was supported by funding from NC State and the Australian Research Council.