Papillary thyroid cancer accounts for the majority of all thyroid malignancies, which primarily impact women. A new study indicates that routinely removing lymph nodes in the neck in these cancer patients may help prevent the disease from coming back.

When thyroid cancer metastasizes, lymph nodes in the neck may be affected, but these lymph-node tumors can be tiny and may not be detected by ultrasounds done before surgery to remove the diseased thyroid — or even during the procedure itself.

In an international academic study published in the December issue of the journal Surgery, UCLA researchers and colleagues demonstrate that routine removal of neck lymph nodes during initial thyroid surgery for papillary cancer may lead to lower disease recurrence rates and lower levels of thyroglobulin, a thyroid tumor marker that can be an indicator of disease when elevated. 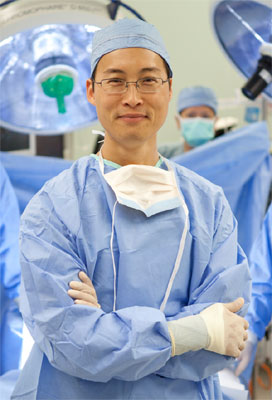 Although it is standard procedure in some cancer centers, there has been debate in the worldwide surgical community about the benefits of routinely removing neck lymph nodes, a procedure known as prophylactic central neck lymph-node dissection, or CLND.

“We found that re-operation rates due to cancer were lower in patients who had routine removal of these lymph nodes, which suggests a more thorough surgical clearance of disease,” said the study’s senior author, Dr. Michael Yeh, an associate professor of surgery at the David Geffen School of Medicine at UCLA. “Our findings may help add to growing evidence that this additional procedure, performed during initial thyroid surgery, may be helpful in management of papillary thyroid cancer.”

For the study, researchers examined data on 606 patients who received care in one of three endocrine surgical units in the U.S., England and Australia. Patients were divided into two groups: Group A patients had undergone total thyroid removal alone; Group B patients had undergone both thyroid removal and dissection of central neck lymph nodes. Patients were followed for an average of three-and-a-half years following surgery.

The standard pre-operative evaluation of all patients included a fine-needle biopsy of the primary thyroid tumor and determination of neck lymph-node disease status through physical examination and ultrasound of the neck.

The rate of disease recurrence in the entire study population was 6.9 percent. The researchers found that the need for central neck re-operation was significantly lower among patients who had undergone the routine initial central neck lymph-node dissection, compared with those who had undergone only thyroid removal (1.5 percent vs. 6.1 percent).

Stimulated thyroglobulin levels were also lower among patients in Group B, which may demonstrate a more thorough clearing of disease in the patients who had both thyroid and neck lymph-node removal procedures, the researchers said.

“This significant reduction in the need for further surgery in the critical central area of the neck is important, since it reduces risk to the many vital structures housed here, such as the nerves supplying the voice,” said study co-author Dr. Mark Sywak of the University of Sydney in Australia.

UCLA’s Yeh noted that blood thyroglobulin levels are a useful and sensitive measure in tracking disease recurrence, especially when many tumors in this area are too tiny to be detected using a physical exam or ultrasound.

Rates of temporarily low calcium levels, a common side effect, were significantly higher in Group B patients (9.7 percent), who had neck lymph nodes removed, than in Group A patients (4.1 percent) who had thyroid-removal surgery alone. The rate of long-term complications was low for both groups — about 1 percent.

The researchers said the next step may be to conduct a prospective, randomized clinical trial to further assess the impact of routinely removing central neck lymph nodes during initial surgery for papillary thyroid cancer.

The study took place at UCLA Medical Center; the University of Sydney, Australia; and Hammersmith Hospital at Imperial College London.