It seems counterintuitive that clouds over the Southern Ocean, which circles Antarctica, would cause rain in Zambia or the tropical island of Java. But new research finds that one of the most persistent biases in global climate models – a phantom band of rainfall just south of the equator that does not occur in reality – is caused by poor simulation of the cloud cover thousands of miles farther to the south.

University of Washington atmospheric scientists hope their results help explain why global climate models mistakenly duplicate the inter-tropical convergence zone, a band of heavy rainfall in the northern tropics, on the other side of the equator. The study appears this week in the Proceedings of the National Academy of Sciences.

“There have been tons of efforts to get the tropical precipitation right, but they have looked in the tropics only,” said lead author Yen-Ting Hwang, a UW doctoral student in atmospheric sciences. She found the culprit in one of the most remote areas of the planet.

“What we found, and that was surprising to us, is the models tend to be not cloudy enough in the Southern Ocean so too much sunlight reaches the ocean surface and it gets too hot there,” Hwang said. “People think of clouds locally, but we found that these changes spread into the lower latitudes.” 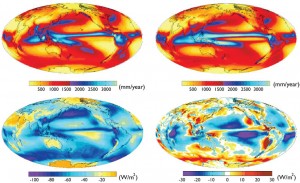 Upper left shows historical rainfall, and upper right is an average of climate models’ estimates — notice the longer blue and red rain bands south of the equator. Lower left is the observed effect of low-level clouds, and lower right is the difference between the measurements and the average model output. Image credit: Y.-T. Hwang, UW (Click image to enlarge)

Previous studies looking at the problem investigated tropical sea-surface temperatures, or ways to better represent tropical winds and clouds. But none managed to correctly simulate rainfall in the tropics – an important region for global climate predictions, since small shifts in rainfall patterns can have huge effects on climate and agriculture.

“The rain bands are very sharp in this area,” commented co-author Dargan Frierson, a UW associate professor of atmospheric sciences. “You go from some of the rainiest places on Earth to some of the driest in just a few hundred kilometers.”

“For the longest time we were expecting that it would be a combination of different factors,” Frierson said, “but this one just stood out.”

The paper shows that cloud biases over the Southern Ocean are the primary contributor to the double-rain band problem that exists in most modern climate models.

“It almost correlates perfectly,” Hwang said. “The models that are doing better in tropical rainfall are the ones that have more cloud cover in the Southern Ocean.”

Hwang will speak on her results in April to scientists at the World Climate Research Programme. The results have also been submitted for inclusion in the fifth report of the Intergovernmental Panel on Climate Change, which is expected to appear next year.

Most models don’t generate enough low-level clouds over the perpetually stormy Southern Ocean, the authors found, so heat accumulates in the Southern Hemisphere.

“Basically hot air rises, and it rains where air rises. So it’s kind of obvious that the rain is going to be over warmer ocean temperatures,” Frierson said. “Our new thinking is that the heat spreads – it’s the warmth of the entire hemisphere that affects tropical rainfall.”

In the short term, climate scientists can look for ways to improve the models to increase cloud cover over the Southern Ocean. Eventually, more powerful computers may permit models that are able to accurately simulate clouds over the entire planet.