Soil may harbor answer to reducing arsenic in rice

Harsh Bais and Janine Sherrier of the University of Delaware’s Department of Plant and Soil Sciences are studying whether a naturally occurring soil bacterium, referred to asUD1023 because it was first characterized at the University, can create an iron barrier in rice roots that reduces arsenic uptake.

Rice, grown as a staple food for a large portion of the world’s population, absorbs arsenic from the environment and transfers it to the grain. Arsenic is classified as a poison by the National Institutes of Health and is considered a carcinogen by the National Toxicology Program.

Long-term exposure to arsenic has been associated with skin, lung, bladder, liver, kidney and prostate cancers, and low levels can cause skin lesions, diarrhea and other symptoms. 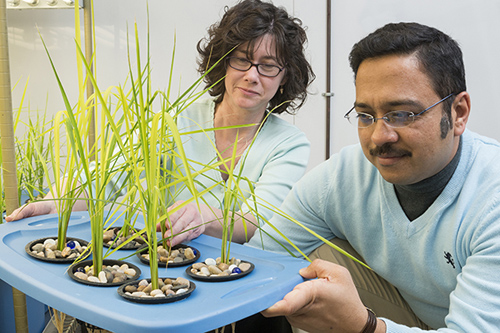 Professors Janine Sherrier and Harsh Bais are working to determine if a naturally occurring soil bacterium, known as UD 1023 because it was first characterized at the University of Delaware, can create an iron barrier that prevents the uptake of arsenic into rice plants. Photo by Kathy F. Atkinson

The risks of arsenic in rice were recently highlighted in the national press, when arsenic was detected in baby foods made from rice. In regions of the world where rice is the major component of the human diet, the health of entire communities of people can be negatively impacted by arsenic contamination of rice.

Arsenic may occur naturally in the soil, as it does in many parts of Southeast Asia, or it may be a result of environmental contamination. Despite the health risks arsenic in rice poses to millions of people around the world, there are currently no effective agricultural methods in use to reduce arsenic levels.

Sherrier, professor, and Bais, associate professor, are investigating whether UD1023 — which is naturally found in the rhizosphere, the layer of soil and microbes adjacent to rice roots — can be used to block the arsenic uptake. Bais first identified the bacterial species in soil samples taken from rice fields in California.

The pair’s preliminary research has shown that UD1023 can mobilize iron from the soil and slow arsenic uptake in rice roots, but the researchers have not yet determined exactly how this process works and whether it will lead to reduced levels of arsenic in rice grains.

“We have a bacterium that moves iron, and we want to see if creating an iron shield around the rice roots will slow arsenic movement into other parts of the plant,” Bais said.

Sherrier and Bais, who received a 2012 seed grant for the project from Delaware’s National Science Foundation Experimental Program to Stimulate Competitive Research (EPSCoR), ultimately want to determine how UD1023 slows arsenic movement into rice roots and whether it will lead to reduced levels of arsenic in the rice grains, the edible portion of the plant.

“That is the most important part,” Bais said. “We don’t know yet whether we can reduce arsenic in the grains or reduce the upward movement of arsenic towards the grain, but we’re optimistic.”

Bais says that, if successful, the project could lead to practical applications in agriculture.

“The implications could be tremendous,” he said. “Coating seeds with bacteria is very easy. With this bacteria, you could implement easy, low-cost strategies that farmers could use that would reduce arsenic in the human food chain.”