University of Minnesota law professor Dale Carpenter’s first book, Flagrant Conduct, took him nearly nine years of research and writing to complete. Research that included, he says, “sitting in police department parking lots at 3 a.m., trying to catch officers going on and off duty so that I could interview them.”

He characterizes the amount of time he put into the book not as a job but as a way of life. If he had been looking for a payoff in writing it, he found it. With reviews in The New Yorker, The New York Review of Books, and this past Sunday, the crème de la crème of the review world—the cover of The New York Times Book Review—it’s clearly a hit with critics. 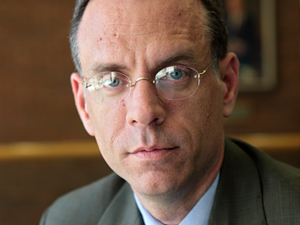 With the legal battle of gay marriage looming, Carpenter's book about the case that intensified the underlying cultural shift of gay rights could not be more timely. Image credit: University of Minnesota

But Carpenter didn’t set out to research and write the book with any end goal in mind beyond a curiosity to know the truth about a case that would become one of most important constitutional decisions in the past half century—and certainly one of the most important cases in the history of American civil rights.

“Law,” says Carpenter, “is a reflection of what we believe to be the proper role of government in our lives—the proper protection for individual human freedom, versus the needs of social order.” The topic of his book, Flagrant Conduct, is a 2003 court case that dealt with the question of whether or not a man or a woman in America has a right to be intimate with a member of the same sex. But, he says, it is simultaneously about far more than that.

“The story of gay and lesbian civil rights is a story of civil rights—of human rights,” says Carpenter. It can’t be dismissed as being about a small group of people. It’s related to the larger question of how we treat people in our society.”

And that, in turn, becomes a story about how laws and societies change.

With the legal battle of gay marriage looming, Carpenter’s book about the case that intensified the underlying cultural shift of gay rights could not be more timely.

Carpenter teaches and writes in the areas of constitutional law, the First Amendment, and sexual orientation and the law. His interest in law and civil rights was inspired by teachers at an early age, he says. From a third-grade teacher who sparked his curiosity in American history and civil rights, the momentum only built through inspirational high school instructors and college, at Yale and the University of Chicago, where he went on to study law.