AUSTIN, Texas — An extremely rare eyeless catfish species previously known to exist only in Mexico has been discovered in Texas.

Dean Hendrickson, curator of ichthyology at The University of Texas at Austin, identified the live fish, discovered in a deep limestone cave at Amistad National Recreation Area near Del Rio, Texas, as the endangered Mexican blindcat (Prietella phreatophila). The pair of small catfish, collected by a team in May, have been relocated to the San Antonio Zoo.

The Mexican blindcat, a species that grows to no more than 3 inches in length, is known to dwell only in areas supported by the Edwards-Trinity Aquifer that underlies the Rio Grande basin in Texas and Coahuila. The new blindcat finding lends additional weight to a theory that water-filled caves below the Rio Grande may connect the Texas and Mexico portions of the aquifer.

“Since the 1960s there have been rumors of sightings of blind, white catfishes in that area, but this is the first confirmation,” Hendrickson said. “I’ve seen more of these things than anybody, and these specimens look just like the ones from Mexico.” 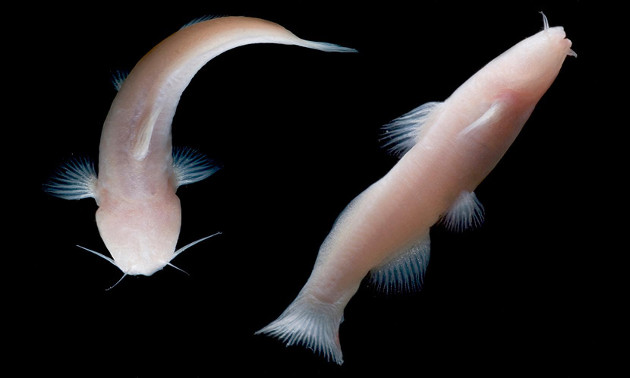 Jack Johnson, a caver and National Park Service resource manager at Amistad, first spotted some of the slow-moving, pinkish-white fish with no eyes in April 2015. After several attempts to relocate the species, Johnson and biologist Peter Sprouse of Zara Environmental LLC led the team that found the fish again last month. Mexican blindcats are a pale pink color because their blood can be seen through the translucent skin, and they dwell exclusively in groundwater.

“Cave-dwelling animals are fascinating in that they have lost many of the characteristics we are familiar with in surface animals, such as eyes, pigmentation for camouflage, and speed,” Sprouse said. “They have found an ecological niche where none of those things are needed, and in there they have evolved extra-sensory abilities to succeed in total darkness.”

The Mexican blindcat was originally described in 1954 when found in wells and springs near Melchor Múzquiz in the northern Mexican state of Coahuila. It was subsequently listed as an endangered species by the Mexican government, and as a foreign endangered species by the U.S. Fish and Wildlife Service. Hendrickson led efforts to locate additional blindcat sites in Mexico and Texas for years but only located them in Mexico on previous expeditions.

“Aquifer systems like the one that supports this rare fish are also the lifeblood of human populations and face threats from contamination and over-pumping of groundwater,” Johnson said. “The health of rare and endangered species like this fish at Amistad can help indicate the overall health of the aquifer and water resources upon which many people depend.”

The fish are not yet on public display. They will be maintained alive in a special facility designed to accommodate cave and aquifer species at the San Antonio Zoo’s Department of Conservation and Research.

“The San Antonio Zoo has a series of labs specially designed to keep subterranean wildlife safe and healthy,” said Danté Fenolio, vice president of conservation and research at the San Antonio Zoo. “The fact that the zoo can participate now and house these very special catfish demonstrates the zoo’s commitment to the conservation of creatures that live in groundwater.”

Others involved in the discovery were Andy Gluesenkamp and Ben Hutchins of Texas Parks and Wildlife, Gary Garrett and Adam Cohen of UT Austin and Jean Krejca of Zara Environmental.

The finding brings the number of blind catfish species within the U.S. to three, all found only in Texas. The two other species of blind catfish in Texas, the toothless blindcat (Trogloglanis pattersoni) and the widemouth blindcat (Satan eurystomus), live in part of the Edwards Aquifer complex, the deep Edwards pool below the city of San Antonio.