Questions for John Savage: How can the global Internet be governed?

Beyond managing domain names and associated IP addresses, the Internet does not have much governance. Technical experts from around the world met recently in Berlin to discuss options. John Savage, the An Wang Professor of Computer Science at Brown, presented a working paper on approaches to the Internet governance question.

PROVIDENCE, R.I. [Brown University] — Policymakers, business leaders and technical experts from all over the world gathered recently in Berlin for the fifth Global Cyberspace Cooperation Summit. Sponsored by the German Foreign Office and the EastWest Institute, a global nonprofit focused on international conflict resolution, the summit aimed to address a wide variety of political, economic and social issues that have arisen since the global emergence of the Internet.

John Savage, the An Wang Professor of Computer Science at Brown and a professorial fellow of the EastWest Institute, was a presenter at the summit on Internet governance. Savage and Bruce McConnell, senior vice president at the EastWest Institute, contributed a working paper to the conference outlining broad recommendations for how the governance of the Internet could be structured.

Could you give us an overview of how the Internet is governed today?

The short answer is that the Internet is basically not governed. One component is governed, and that concerns domain names and the associated IP addresses. There is an organization called the Internet Corporation for Assigned Names and Numbers or ICANN that supervises this process. The creation of the corporation was supported by the U.S. government, which maintains limited control over the organization. Specifically, the government has some limited control over the root zone file. When a computer encounters a domain name its never seen before, it goes to the root zone file and from there it’s directed to machines that can do the translation from domain name to IP address. The U.S. maintains some control over the file, but has announced that in about a year it plans to relinquish that control. 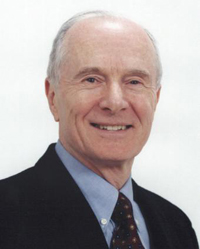 John Savage. “The likelihood of reaching agreement on [Internet governance issues] increases if we can simplify the landscape. To us, that means disaggregating governance into a small set of important issues.” Image credit: Brown University

Over the last decade many forums have emerged to discuss issues of Internet governance, including the World Summit on the Information Society, the U.N.’s Internet Governance Forum and others. They examined an astonishing range of issues, but none of these groups has authority to make decisions. So it’s fair to say that governance of the Internet is still evolving.

There have been calls for expanding global governance of the Internet. Could you explain what types of issues that might entail?

We ask the question in our paper: What is Internet governance? The fact is that it means many things to many people. To some it means doing something about crime mediated by the Internet — fraud, identity theft, theft of intellectual property. For others it’s Internet terrorism. For others it’s human rights — freedom of expression and protection from surveillance. The list goes on.

In our paper, we outline five broad areas of concern for Internet governance. Those include network architecture (technical issues dealing with the function of the Internet), content control (issues like spam and child pornography), cybercrime, cyber attacks (terrorism and major network disruptions), and human rights.

What are some of your recommendations on how to deal with these issues?

When you think about it, so many of the issues people are looking to govern predate the Internet — crime, human rights terrorism, etc. There do exist international organizations that deal with many of these issues already. We think that existing organizations should deal with those governance matters involving the Internet that fall within their respective areas. For example, do we need a separate agency to deal with Internet-based crime and terrorism when we have Interpol and a variety of other organizations that already deal with these things? The answer in our view is no, there’s no need for that.

The problem with a lot of these agencies is that they’re not up to speed when it comes to the Internet. So we propose that these organizations should start to air these issues in forums with multiple stakeholders who have expertise in the Internet. They should bring in NGOs, corporations, and technical experts to give input on technical, political, and economic aspects to these issues. When you create multi-stakeholder organizations like these, you bring expertise that governments and agencies don’t have. As a consequence, they can make better decisions and move forward more rapidly.

What are the advantages to this decentralized approach?

Internet governance today is very complex, largely because it encompasses a large variety of issues. The likelihood of reaching agreement on them increases if we can simplify the landscape. To us, that means disaggregating governance into a small set of important issues, including those we outline in the paper. That increases the odds that existing international bodies can deal with most of them. Multi-stakeholder participation in each of these bodies brings the expertise and concern found among the citizenry and nongovernmental organizations to bear on complex Internet governance issues. We would hope that that could be done in a way that encourages openness, transparency, and inclusiveness.

If one organization governs all of the Internet, some governments may be tempted to try to capture control of this organization and, thereby, have too great a say about Internet governance. For example, the governments of Russia, China, Saudi Arabia, and others have advocated consolidating Internet governance under the International Telecommunications Union, a United Nations organization that currently oversees telephony and other matters of international communications. We would argue that isn’t a good approach, given the diversity and complexity of the issues at hand.