REDMOND, Wash. — June 20, 2013 — Mobile users can choose from a vast array of games, so how can game makers stand out in the saturated competitive market?

Typically, success comes either from spending a fortune on marketing or from simply getting lucky, according to QONQR CEO Scott Davis. QONQR (pronounced “conquer”) has crafted a third path: Making a number of contrarian choices that helped lift the startup to profitability and gain a growing base of rabidly enthusiastic customers.

A location-based, social, mobile game many have described as “[the board game] Risk meets Foursquare,” QONQR — the name of the game as well as the company — began as a great idea that won the first Twin Cities Startup Weekend in September 2010 in Minneapolis.

The QONQR storyline is that an artificial intelligence (AI) of unknown origin has been spread sporadically and has embedded part of its powerful intelligence into the Internet of today. The AI’s motives and objectives — Is it good? Is it evil? Is it neutral? — are unknown, and those aware of its presence (the gamers) have split into three rival factions that battle across the globe via virtual nanobots launched from their mobile devices. QONQR’s true motives are still undiscovered, but all agree that QONQR’s potential to impact the human race is significant.

However, since QONQR has such mysterious origins and unknown motives, the three viciously opposed factions are battling to control the population centers of the world. The factions establish safe zones of operation in the cities, towns and villages they control, so they may advance their goals. 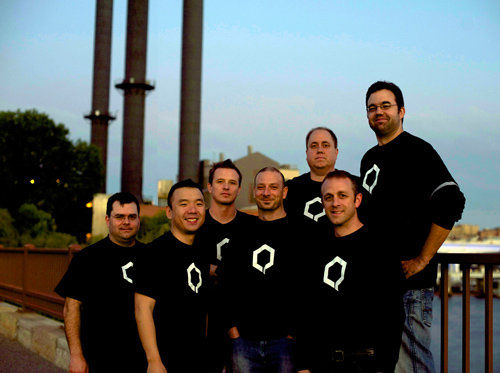 The twist to QONQR is that gamers “battle” and interact where they are physically located, in real space and time. They battle to gain territory — for instance, to “take” a nearby city — by making strategic use of the various resources provided by the game.

“Historically, location-based games have floundered because they made gamers move around physically to play,” says Davis. “QONQR’s approach was to let people play wherever they happen to be, which allows us to pull the real world into the game in a new way.

This approach is clearly resonating with gamers. As of May 2013, QONQR players had “captured” approximately 370,000 cities in 174 countries, which represent about 12 percent of the populated world.

No to venture capital funding, yes to Windows Phone

In addition to its novel approach to geosocial gaming, QONQR has also taken a unique approach to many aspects of its business.

“The common wisdom is that once a startup has a prototype or beta product out there, it’s time to start raising venture capital money,” says Davis. “Luckily, early in my quest for outside funding, I ran across some smart people who urged us to stay bootstrapped for as long as possible.”

With that independence comes freedom: Instead of continuing to spend his time creating elaborate pitches and meeting with venture capitalists, Davis got to focus on coding — working on new features and capabilities for QONQR. The decision paid off: QONQR achieved profitability without having to cede any control to outside entities. The game also is one of the top-rated mobile apps in the Windows Phone marketplace, and its monetization conversion rate is at the high end of industry averages.

“My only regret is that I spent so much time and effort getting ready to raise outside funding,” says Davis. “If I’d put that time into improving the product, we might have been profitable six months after launch instead of ten.” 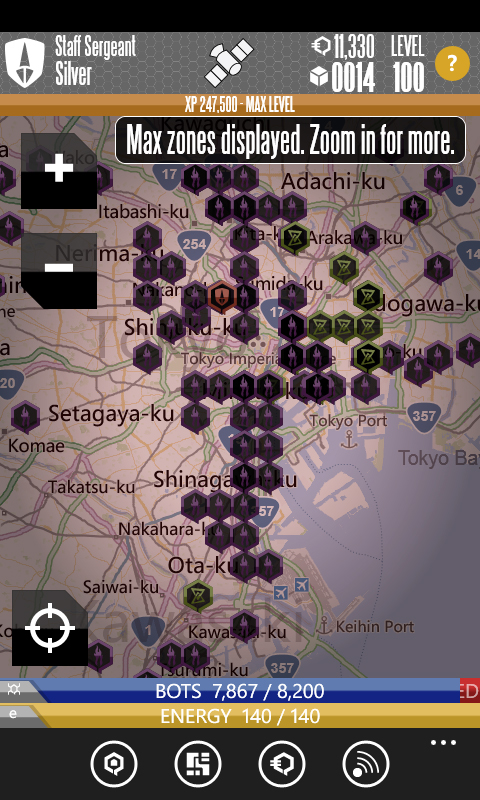 QONQR is a mobile game that brings the game to where you live, pitting you against other faction members in your area. This screen shot shows a player in Tokyo. Image credit: Microsoft

Another nonstandard business decision: QONQR’s inclusion of Windows Phone as one of its first two mobile platforms (along with iOS); the Android version has recently released in closed beta.

“We had a number of ‘experts’ try to convince us we were putting in too much effort into a platform with too few users (as compared with iOS and Android) — but that’s exactly why Windows Phone makes sense for startups like us,” Davis says. “It’s all about discoverability.”

In other words, it’s easier for a startup with a limited budget to be found by interested customers when it’s not competing against more than half a million other app developers who can afford to spend millions of dollars in marketing money to essentially buy their initial user base.

“We released QONQR at the same time on Windows Phone and iOS platforms, and today we have 10 to 15 times more downloads, up to about 18,000 a month, on Windows Phone,” he says. “Sure, the Windows Phone consumer base is smaller than the one for iOS, but the market is still bigger than any startup can reach, and it’s so much easier to be found and embraced by that all-important first set of users.”

Microsoft is familiar territory for Davis and the other members of the QONQR team. Davis, a founding member of four companies before QONQR, led the Twin Cites Silverlight User Group for four years and is president of the BizLounge entrepreneurship group in Minneapolis. The other programmers on the team — including Justin Peck, who had the original idea for the QONQR game; Jessy Houle, a developer of Web-based and data-centric applications; Andy Pickett, a software developer and avid gamer; Donn Felker, an expert in agile and mobile software development; and Jeff Diercks, application architect — all are steeped in and familiar with Microsoft tools and technologies. All have been user group leaders for Microsoft-centric technologies as well as conference speakers on .NET and mobile topics.

QONQR is an end-to-end .NET solution, starting with the Windows Phone client, through the custom Windows Azure-hosted Model / View / Controller Web API, to the Azure storage. QONQR takes advantage of Windows Azure for blob storage, caching, message queuing and Microsoft SQL Azure, and also chose it for the scalability the Azure Web and worker roles offer. The Azure infrastructure not only supports the Windows Phone version of QONQR, but also iPhone and Android, making it possible for QONQR to be one of the few massively multiplayer mobile games crossing Windows Phone, iPhone and Android.

“We met many people and built a stronger relationship with Microsoft through BizSpark and the Accelerator events,” says Davis. “We also received free Windows Azure hosting for a year, which is great. We’re very data-heavy users, topping 1 million requests a day, with most of our data in a relational database. We’re very pleased with how Azure and the other Microsoft technologies work for us.”