At home in her environment

When Kate Knuth proclaims that she loves Minnesota and is dedicated to living and working here, you can hardly accuse her of living in a hometown bubble.

After all, Knuth studied at the University of Chicago, had an internship in Hawaii, earned a master’s degree at Oxford University, and took advantage of a Fulbright scholarship to sample life in Norway.

Her roots and heart may be in Minnesota, but she’s seen and experienced an awful lot for a 32-year-old. And when it comes to accomplishments, let’s just say her resume is rich and impressive. 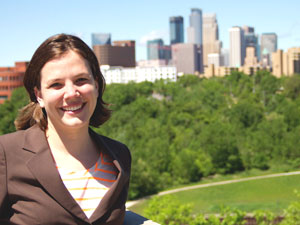 In January, Governor Mark Dayton appointed Kate Knuth as a citizen representative to the Minnesota Environmental Quality Board. She’s also pursuing a Ph.D. in conservation biology while overseeing the Boreas Environmental Leadership Program through the Institute on the Environment. Image credit: University of Minnesota

Knuth is currently finishing a Ph.D. in conservation biology at the U’s College of Food, Agricultural and Natural Resource Sciences, and she directs the Boreas Leadership Program—a unique offering from the U’s Institute on the Environment.

And earlier this year Gov. Mark Dayton appointed her a citizen member of the state’s Environmental Quality Board.

From budding entomologist to ‘seasoned’ politician

From her earliest days, Knuth has nurtured a love of the environment.

“Growing up, I really liked to be outside and I really liked bugs,” she says. “I wanted to be an entomologist when I was 5, before I knew how to spell the word.”

She wound up double majoring in biology and philosophy at Chicago and worked for a researcher at the Field Museum of Natural History, where she felt like the luckiest person in the world to walk through the museum “and go in the unmarked door behind the South Pacific exhibit.”

“As I was studying more and more biology I got more into the environmental work because I had this realization that the things I really loved were under threat,” she says. She also studied Norwegian, which led to her spending a summer in Norway and ultimately to her experience as a Fulbright Scholar.

For good measure, she tacked on a graduate degree in biodiversity conservation and management at Oxford—“a practically oriented degree at a super academic institution,” she notes.

When she came back home she worked at Hamline University’s Center for Global Environmental Education. And then she promptly decided to run for office, which she admits is “not particularly an academic pursuit.”

Nonetheless, she served three terms as a representative in District 50B (her father and uncle also served as legislators—on opposite sides of the aisle) and was known for her work in energy and environmental issues, particularly in clean energy, climate policy, and toxic chemical policy reform.

“You learn a lot of interesting things (campaigning) just by day after day, hour after hour knocking on people’s doors and asking them what they think,” Knuth says. She adds that her time at the Legislature gave her “a strong sense that public service is important and, dare I say, noble, which is not always the popular view, but I think more widely held in Minnesota than in other places.”

The ‘world-class university just down the road’

Knuth decided to pursue a Ph.D. while serving at the Capitol.

“Conveniently, the place that I love had a world-class university just down the road, which makes me even more excited to be in Minnesota,” she says.

(At this point, Knuth is told that her quote may wind up in U marketing materials someday, to which she laughs and expands on the thought.)

“Not everywhere has a world-class public land-grant university; I think it’s a real asset. It keeps me more attached to Minnesota and also excited about what we can do as a state. …

“We don’t have another research university in [Minnesota], so we need to really value the one we have and make sure we hold it to high standards and take care of it.”

For her part, she’s happy to be tending the Boreas Leadership Program, which helps graduate students to become effective environmental leaders.

The program offers half-day to two-day skill training sessions in topics like integrative leadership and communications and media, plus other opportunities to come together and create networks across the University.

As to the future, Knuth hasn’t charted her long-term course, but it’s safe to say that it will likely include more public service and significant time enjoying the outdoors in Minnesota. She’s an avid cross-country skier, and she recently finished her third sprint triathlon.

“I really I have deep roots in this state and I love it, so I want to figure out a way to contribute here,” Knuth says. “I’d like to be in higher education. I’d like to serve the community in some way, whatever that looks like. I could do it in a lot of different ways.”

“The job I have right now at the Institute is a perfect fit,” she adds. “It’s a really fun, exciting, engaging place to work. To get to develop this program has been and will really continue to be an awesome job.”