This summer, the new Yale Center for Pulmonary Infection Research and Treatment (CPIRT) held its first meeting, with the goal of breathing fresh air into the science of lung infection. Conceived by associate professor Dr. Charles Dela Cruz as a cross-disciplinary hub for investigators, CPIRT brings together innovative minds from basic, translational, and clinical research areas across Yale. The center’s ultimate aim is to develop better treatments for both acute and chronic ailments — from pandemic flu to emphysema — that are affected by lung infections.

YaleNews talked to Dela Cruz about such issues as the use and misuse of antibiotics to treat lung infections, the impact of global warming on illness, and outbreak preparedness. The following is an edited version of the conversation.

What’s the goal of CPIRT?

The topic of pulmonary infection has been a focus of many researchers at Yale in different areas of expertise and disciplines. We see a lot of patients with infections who are treated by pulmonologists, intensivists, infectious disease experts, primary care doctors, emergency doctors, hospitalists — all these specialties deal with lung infection. 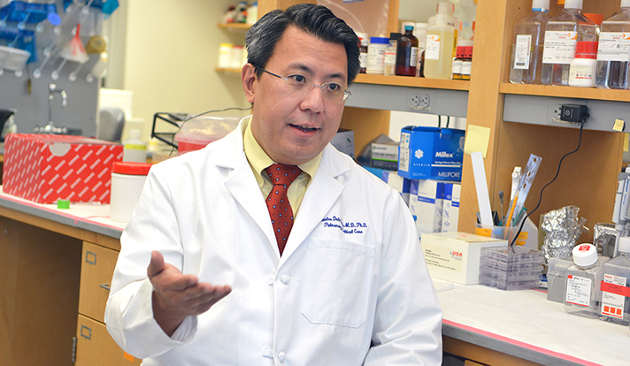 Yale has a pulmonary section and an infectious disease section.  What gap does this center fill?

This center will bring together everyone who is interested in this topic — from the basic and translational researchers to clinical research — so we can meet regularly and present our work. I have enlisted great investigators from pulmonary, infectious diseases, internal medicine, pediatrics, people who study cystic fibrosis, public health, epidemiologists, immunobiologists, and microbiologists. CPIRT allows us to share resources, such as a clinical database and samples from patients, with people who do the basic science research.

Our plan initially in the next few years is to create an environment where we can share resources and ideas, and come up with collaborative grants. It’s also important to have a collaborative effort so that we can have a better definition and understanding of lung infection.

Are there other centers like this in the region or in the country?

There are similar efforts in other parts of the country but they tend to focus on basic research. In addition to the basic sciences, we’re trying to develop a more translational bent so that we can recruit patient samples, conduct clinical trials, bridge the basic researcher, come up with questions, and bring context to some of the research science that we do in terms of patients.

Lung infection is starting to get a foothold more recently for a few reasons: One is that the Centers for Medicare & Medicaid Services now requires high-quality and patient-centered care and accountability measures with public reporting of 30-day mortality for pneumonia after discharge.

What are common lung infections?

Pneumonia is caused by viruses and bacteria. You also hear about tuberculosis in people from other parts of the world, or in people who are homeless and in confined areas. It has not been a big a problem in the United States other than in major urban neighborhoods; however, for the first time in two decades, TB cases have increased. In other parts of the world, it’s a major problem.

However, in the United States, there’s a cousin of a microbacteria that is very similar to tuberculosis — the non-tuberculous mycobacteria. The patients are predominantly women, and they have these infections that can be very debilitating. For some, its treatment course requires up to three or four antibiotics a day for many months. It used to occur in places where the climate is much warmer, and as we see more global changes and our climate getting warmer, I predict that it’s going to be more of a problem for us.

What’s the connection between chronic lung infection and climate?

Global warming shifts around and modifies the environmental microbes. It allows for warmer water temperature, which allows for growth of bacteria, such as Legionella, which causes Legionnaires’ disease. With global warming, I think these environmental pathogens can potentially cause problems in the lungs as we get exposed to them.

Part of the CPIRT mission is to focus on preparedness for outbreaks. Any predictions about what could be problems in the future?

Viral infections come in waves. In 2009, when the pandemic flu hit, we knew by history what it was going to be like. However, we were still not prepared. Luckily, the pandemic was able to self-limit over time. It wasn’t like 1918, when the Spanish flu killed millions of people. But I do worry, given some of our environmental changes and the increase of travel and globalism and the ease of transmitting to the next person, an epidemic like that could happen. SARS was an example. These are topics that CPIRT would like to tackle.

In addition to basic and translational science, will you be recruiting for clinical trials?

Yes, that’s one of the goals. Right now, our goal in the three- to five-year timeframe is to expand our clinical presence. We don’t tend to think about pneumonia as a chronic condition. But we feel that some of the patients end of up with longer-term problems. We want to be able to capture some of those patients in addition to patients who have chronic lung infections that are really hard to treat. We also plan to focus on clinical trials, on new antibiotics, and new therapies such as antivirals.

Another question is: Does immunotherapy help in the setting of pneumonia? Whether to treat pneumonia with immunotherapy has been quite controversial. You don’t want to suppress the immune system as you’re trying to get rid of the bug. But certainly some theories and some evidence suggest that maybe the pandemic flu occurred because the immune response was too strong. People were dying because their immune system response to the viral infection was exaggerated.

One last question: You want to raise public awareness about lung infections. What does the public not know?

The public doesn’t realize that pneumonia can affect everybody, from children to the elderly. Any of us is susceptible to it. For people who have had pneumonia, or who have had a loved one die of pneumonia, there is no strong pneumonia patient advocacy to raise awareness about preventative measures like vaccination.

Also, people who have chronic lung disease should be careful about being close to children or people who have infections. Individuals who have no underlying diseases should not take their symptoms — such as high fevers, cough, sputum production, difficulty breathing — for granted, especially when it does not get better. We’ve seen people who have one of these lung infections and the outcome can be bad. We can’t predict who they are.