The prevailing narrative of the financial crisis revolves around banks’ reduced ability to issue loans, but a new paper by University of Arizona associate professor of finance Kathy Kahle reveals that the credit supply shock did not affect publicly traded firms as much as expected.

Bank losses from toxic assets were responsible for the credit contraction, but those toxic assets – mostly mortgage-backed securities – are not directly related to the performance of industrial firms.

Kahle and co-author René M. Stulz of Ohio State University were interested in what the financial and investment policies of those firms implied about the operation of the credit channel during the crisis, and whether firms’ behavior was consistent with the conventional focus on the credit supply shock. 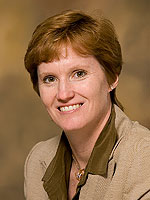 “The narrative is that companies were having trouble raising debt, but we just don’t find evidence of that,” Kahle said. “When we compared data from the year before the crisis with the year after the crisis, we found that companies didn’t stop issuing debt.”

Kahle said the financial crisis began in the third quarter of 2007, when interest rates shot up and economists began pointing to growing concern about subprime mortgages. But the crisis escalated in 2008, after Lehman Brothers and AIG failed.

“After September 2008, we saw some effects in firms, but it was not consistent,” she said. “Smaller firms, or already financially constrained firms, did have trouble issuing debt, but that was just not the case for large, investment-grade firms. What we do see after the failure of Lehman is an enormous drop in consumption. For example, the October 2008 sales of Neiman Marcus are lower by 25 percent than the October 2007 sales.”

Kahle also showed that capital expenditures for industrial firms did not decrease before September 2008 and did not decrease more for firms that were more bank-dependent. In addition, net equity issuance of small or unrated firms was lower during the crisis compared to the year before the crisis; she would expect that an impaired credit supply by itself would have encouraged equity issuance as a substitute for debt.

In light of that, Kahle was interested in whether firms that were having trouble raising debt were using those cash holdings to alleviate the credit shortage.

“You would think that if they were waiting for a rainy day, the financial crisis would qualify,” she said. “But actually, the financial crisis made CEOs and managers more risk-averse. After September 2008, firms increased their cash holdings, most likely for precautionary reasons in response to an increase in risk.”

Her evidence does not support the assumption that firms’ financial policies and capital expenditures were influenced by the bank credit supply shock.

“The crisis leaves almost no trace in the corporate sector before the fall of 2008,” she said. “After September 2008, it has a major impact on financial and investment policies, but this impact is not the one predicted by simple versions of the bank credit supply shock hypothesis. Instead, our findings are consistent with a decrease in demand for firms’ goods and an increase in risk and uncertainty.”