Psychopaths are not neurally equipped to have concern for others

Prisoners who are psychopaths lack the basic neurophysiological “hardwiring” that enables them to care for others, according to a new study by neuroscientists at the University of Chicago and the University of New Mexico.

“A marked lack of empathy is a hallmark characteristic of individuals with psychopathy,” said the lead author of the study, Jean Decety, the Irving B. Harris Professor in Psychology and Psychiatry at UChicago. Psychopathy affects approximately 1 percent of the United States general population and 20 percent to 30 percent of the male and female U.S. prison population. Relative to non-psychopathic criminals, psychopaths are responsible for a disproportionate amount of repetitive crime and violence in society.

“This is the first time that neural processes associated with empathic processing have been directly examined in individuals with psychopathy, especially in response to the perception of other people in pain or distress,” he added. 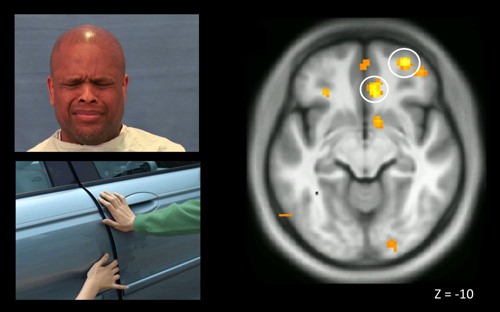 A study of 80 prisoners used functional MRI technology to determine their responses to a series of scenarios depicting intentional harm or faces expressing pain. It found that psychopaths showed no activity in areas of the brain linked to empathic concern. Image courtesy of Jean Decety

The results of the study, which could help clinical psychologists design better treatment programs for psychopaths, are published in the article, “Brain Responses to Empathy-Eliciting Scenarios Involving Pain in Incarcerated Individuals with Psychopathy,” which appears online April 24 in the journal JAMA Psychiatry.

Joining Decety in the study were Laurie Skelly, a graduate student at UChicago; and Kent Kiehl, professor of psychology at the University of New Mexico.

For the study, the research team tested 80 prisoners between ages 18 and 50 at a correctional facility. The men volunteered for the test and were tested for levels of psychopathy using standard measures.

They were then studied with functional MRI technology, to determine their responses to a series of scenarios depicting people being intentionally hurt. They were also tested on their responses to seeing short videos of facial expressions showing pain.

The participants in the high psychopathy group exhibited significantly less activation in the ventromedial prefrontal cortex, lateral orbitofrontal cortex, amygdala and periaqueductal gray parts of the brain, but more activity in the striatum and the insula when compared to control participants, the study found.

The high response in the insula in psychopaths was an unexpected finding, as this region is critically involved in emotion and somatic resonance. Conversely, the diminished response in the ventromedial prefrontal cortex and amygdala is consistent with the affective neuroscience literature on psychopathy. This latter region is important for monitoring ongoing behavior, estimating consequences and incorporating emotional learning into moral decision-making, and plays a fundamental role in empathic concern and valuing the well-being of others.

“The neural response to distress of others such as pain is thought to reflect an aversive response in the observer that may act as a trigger to inhibit aggression or prompt motivation to help,” the authors write in the paper.

“Hence, examining the neural response of individuals with psychopathy as they view others being harmed or expressing pain is an effective probe into the neural processes underlying affective and empathy deficits in psychopathy,” the authors wrote.

Decety is one of the world’s leading experts on the biological underpinnings of empathy. His work also focuses on the development of empathy and morality in children.

The study with prisoners was supported with a $1.6 million grant from the National Institute of Mental Health.