ANN ARBOR, Mich.— Like bad neighbors who decide to go wreck another community, prostate and breast cancer usually recur in the bone, according to a new University of Michigan study.

Once in the niche, the cancer cells stay dormant and when they become active again years later, that’s when tumors recur in the bone. The implication is that this may give us a window as to how dormancy and recurrence take place.

Taichman and a team of researchers looked in the bone marrow and found cancer cells and hematopoietic stem cells next to one another competing for the same place. The finding is important because it demonstrates that the bone marrow niche plays a central role in bone metastasis—cancers that spread into the bone—giving researchers a new potential drug target.

Drugs could be developed to keep the types of cancers that likely recur in the bone from returning, Taichman said. For example, these drugs could either halt or disrupt how the cancer cells enter or behave in the niche, or keep the cancer cells from out-competing the stem cells. 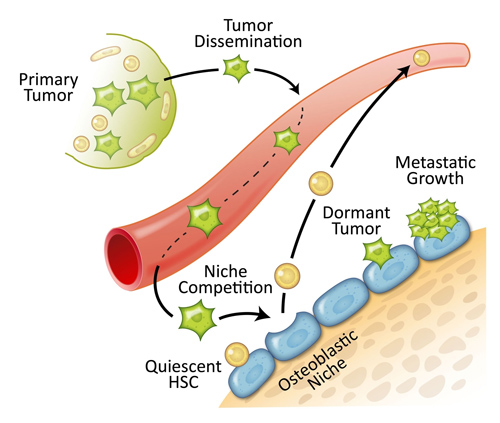 Cancer cells act a lot like stem cells in that they must reproduce, so the U-M research group hypothesized that prostate cancer cells might travel to the niche during metastasis. One of the jobs of the niche is to keep hematopoietic stem cells from proliferating—which may be the case for cancer cells, as well, the researchers found.

So why does cancer recur? Say a person has a tumor and surgeons cut it out or do radiation, but it recurs in the bone marrow five years later, Taichman said. Those cancer cells had been circulating in the body well before the tumor was discovered, and one place those cancer cells hid is the niche.

“So what have the cancer cells been doing during those five years? Now we have a partial answer—they’ve been sitting in this place whose job it is to keep things from proliferating and growing,” Taichman said.

“Our work also provides an explanation as to why current chemotherapies often fail in that once cancer cells enter the niche, most likely they stop proliferating,” said Yusuke Shiozawa, lead author of the study. “The problem is that most of the drugs we use to try to treat cancer only work on cells that are proliferating.”

“Eventually the entire blood system is going to collapse,” he said. “For example, the patient ultimately becomes anemic, gets infections, and has bleeding problems. We really don’t know why people with prostate cancer die. They end up dying from different kinds of complications in part because the marrow is taken over by cancer.”

The next step is to find out how the tumor cell gets into the niche and becomes dormant, and exactly what they do to the stem cells when they are there. Researchers also want to know if other types of cancer cells, such as breast cancer, also go to the niche.