‘Princess Pheromone’ Tells Ants Which Larvae Are Destined to Be Queens

For Indian jumping ants (Harpegnathos saltator), becoming royalty is all about timing.

If a larva gives signs of maturing into a queen at the wrong time, it is physically harassed into remaining a humble worker. But the same cues at the right time give the larva access to the resources it needs to thrive and develop as a queen. Now scientists have identified the “princess pheromone” that tells a colony when an ant larva is aiming for coronation.

“People have been studying pheromones in ants for more than 50 years, and pretty much everything we’ve learned regards how adult ants use pheromones to communicate with each other,” says Clint Penick, a postdoctoral researcher at North Carolina State University and lead author of this study. “This is one of the only instances – maybe even the first time – that we’ve found ant larvae producing pheromones that influence colony behavior.”

Every year, around the time of the first summer rains, colonies of H. saltator rear the newest crop of queens, which leave their colonies after reaching maturity and embark on a mating flight. The queens breed with winged males and then establish new colonies of their own. 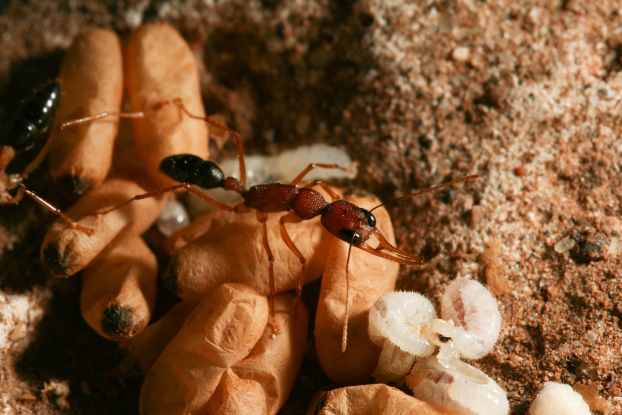 However, if an ant larva indicates that it is developing into a queen at the wrong time of year – such as midwinter – that’s a problem. The timing is all wrong for a mating flight, and the larva would be using colony resources for no reason. So when worker ants detect a nascent queen at the wrong time, they chew on it. Literally. The stress induced by biting the larva induces the larva to develop as a worker. Video of workers attacking these larvae can be seen at https://vimeo.com/212090021.

“Workers may also prevent queen development if more queens are developing than the colony can support,” Penick says. “By the same token, the princess pheromone, when released at the right time, ensures that workers facilitate the development of the next generation of queens.”

The researchers could tell that some sort of non-visual cue was passing information from H. saltator larvae to workers based on observations of how worker ants interacted with seemingly identical larvae.

The researchers then experimented by transferring the wax layer from queen larvae to the cuticle of worker larvae. The presence of traces from the queen larvae was enough to get workers to respond to the small worker larvae as if they were developing into queens.

In addition, by treating worker larvae with a hormone known to trigger queen development, the researchers were able to make the larvae produce the princess pheromone. This also happened when the hormone was given to male larvae; the males would produce the princess pheromone even though they were incapable of developing into queens. The presence of the pheromone alone was enough to trigger aggressive behavior from workers, even towards male larvae.

“Signals like the princess pheromone are essential to social insects,” Penick says. “Ants have to have a way to ensure that there are enough workers in the colony, otherwise all larvae could develop as queens and the insect ‘society’ would break down. Instead of ants, you would have something more like a colony of wasps.

“This work sheds light on how castes are differentiated in this species and gives us more insight into the complex evolutionary biology behind social insect behaviors,” Penick says. “Given that H. saltator is from one of the older lineages of ants, this mechanism is likely to be fairly common in social insects – but more work needs to be done to determine whether princess pheromones are present in other species.”

The paper, “A larval ‘princess pheromone’ identifies future ant queens based on their juvenile hormone content,” is published in the journal Animal Behaviour. The paper was co-authored by Jürgen Liebig of Arizona State University.