George Lovell, UW associate professor of political science, is the author of “This Is Not Civil Rights: Discovering Rights Talk in 1939 America,” published in October by University of Chicago Press. He answered a few questions about his book for UW Today.

What is the basic concept behind “This is Not Civil Rights”?

The book examines more than 1,000 citizen complaint letters regarding rights from the late years of the Great Depression along with replies written by federal government officials. Looking at what people complained about, and how they tried to justify their claims, reveals how popular understandings of rights and the role of government develop over time. 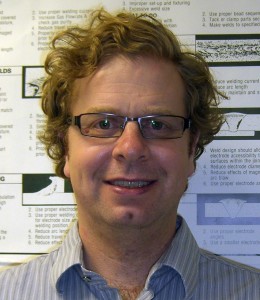 You chose to study letters of complaint sent to the White House and the Justice Department between 1939 and 1941. Why these years? And what do they reveal about the reality of Americans’ rights versus their understanding of those rights?

The Justice Department established a tiny Civil Liberties Unit in 1939. It was the first federal office dedicated to protecting rights since Reconstruction. That office processed a great deal of citizen mail that was sent to the federal government, including the White House. Luckily, much of the correspondence for the first few years of the unit is preserved in the National Archives. Similar letters from other years were not accessible or as well preserved.

The letters cover an important transitional period in civil rights history. In 1939, there was almost no federal civil rights law and very little capacity of the government to protect rights. Most states were doing nothing to protect rights, and were often perpetrators of rights violations.

The letters were written just before World War II, which transformed thinking about the minority rights and produced political changes that later facilitated the emergence of the Civil Rights Movement. These letters are also particularly interesting because the difficult economic conditions inspired people to insist that a wide range of concerns raised issues of “rights,” including many concerns about access to jobs or marketplaces.

The range of complaints was quite broad, both in terms of topic and gravity. There were a large number of complaints about police brutality targeting racial minorities, migrant workers and union organizers. There are complaints about state laws limiting free speech or political participation and claims for religious liberty and property rights. 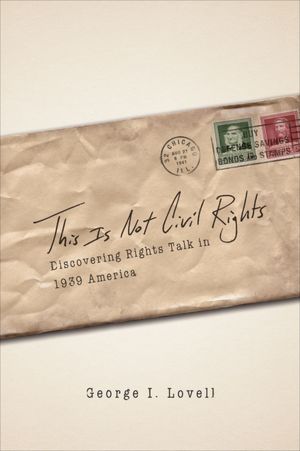 “This is Not Civil Rights: Discovering Rights Talk in 1939 America,” by George Lovell, was published in October by University of Chicago Press. Image credit: University of Washington

Complaints covered the political spectrum — some people claimed that government was not providing adequate relief from the Depression, while others claimed that their rights were violated by federal efforts to help with unemployment. The one constant across the letters is that the federal officials who responded almost invariably refused to provide any help.

Thus, these exchanges show that people had broad aspirations for rights that went well beyond what government would recognize. The exchanges also help to dramatize the importance of later expansions in federal rights protections.

Why is it important to study how Americans use “legal discourses”?

People have long claimed that Americans have a peculiar habit of talking about law and rights as they engage in politics. People who make that claim are usually very critical of legal discourses. They claim that the pervasiveness of “rights talk” helps to explain some pathologies of U.S. politics and policy, including the inability to settle longstanding controversies over social issues and the tattered social safety net.

However, these kinds of claims are usually based on observations about how elites or government officials use legal language, rather than actual evidence of the language ordinary people use. Looking at these actual right complaints side by side with government responses (which were also made in legal language) provides a more realistic picture of how legal language shapes politics. The letters show how people used rights language to advance noble aspirations, and also that people who claimed novel rights had a surprisingly sophisticated understanding of law’s practical shortcomings.

After studying the letters of complaint from this era — long before what we generally view as the Civil Rights Era — what were your findings?

Well before expansion of rights protections in the 1960s, Americans could articulate a wide variety of concerns using the language of rights and the Constitution. The language of rights helped many powerless and isolated people make claims that today’s readers will find quite moving, even though legal officials of that time found no merits to the claims.

I conclude that popular rights talk should be taken seriously and nurtured. By today’s legal standards, the claims in the letters are more attractive and more true to constitutional values than the claims being made at that time by the Supreme Court and Roosevelt administration.