Eugene Stillday was born in Ponemah on the Red Lake Indian Reservation, where he grew up speaking Ojibwe. That is, until his public school teachers forbade him from the practice and punished him and his classmates for speaking the only language they knew.

“[So] we developed a system,” Stillday says. “We’d be talking to each other in Ojibwe, and when the teacher came nearby we’d just naturally swing into English, and when she left, you know, right back to Ojibwe.” 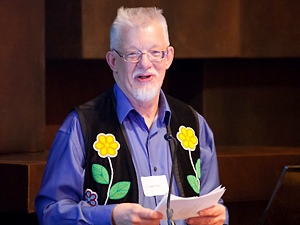 John Nichols, U professor in American Indian studies and co-author of “A Concise Dictionary of Minnesota Ojibwe,” spoke about the new Ojibwe People’s Dictionary at a special launch event April 2. Photo: Brady Willette

He jokes about the situation now, but Native language suppression in public schools and boarding schools over many decades is one of a number of factors that have put Ojibwe—and many other tribal languages—in danger of extinction.

So Stillday can derive extra satisfaction for being part of a groundbreaking project that will go a long way toward preserving his language. The new online Ojibwe People’s Dictionary is the result of extensive work by faculty and students in the U’s Department of American Indian Studies in collaboration with tribal elders like Stillday and other partners, including the Minnesota Historical Society and the U of M Libraries.

It is, in essence, an illustrated “talking” dictionary, with photographs old and new and some 60,000 audio clips of Ojibwe words and sentences, spoken by elders from different areas and in different dialects.

“With this tool, we have charted a clearer path for the future projects with similar linguistic ambitions,” says James Parente, dean of the College of Liberal Arts. “And with this tool, both our students and our communities will grow together in the learning of the Ojibwe language and culture for years to come.”

The Ojibwe People’s Dictionary is an extension of the work begun many years ago by John Nichols, a U professor in American Indian studies and one of the foremost Algonquian language experts. In 1995 Nichols co-wrote “A Concise Dictionary of Minnesota Ojibwe,” a printed dictionary containing 7,000 words that has reigned as the go-to resource … until now.

The online Ojibwe People’s Dictionary builds on that with multimedia splendor. Next to many of the words are icons pointing you to audio recordings, images, documents, even videos—many from the collections of the Minnesota Historical Society.

And the audio pronunciations, provided by a cadre of nine Ojibwe speakers who have given hours and hours of their time, further clarify the language for those seeking to learn it. (Listen to pronunciations of jiimaan (canoe) and ojiimaan by clicking on the audio icons here.) 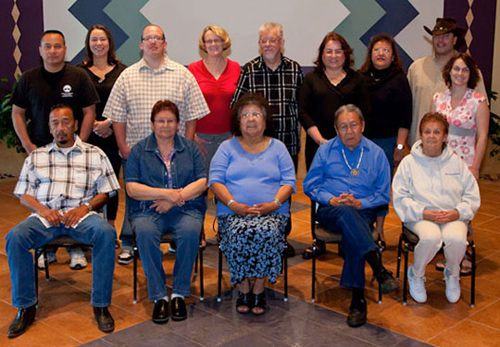 A new tool for the language generation

Persia Erdrich is an ebullient U senior majoring in American Indian studies with a focus on Ojibwe language. She’s helped run an Ojibwe language immersion camp in the summer and immersion weekends during the school year, and she’s excited about her new language tool.

“It means a lot of great things,” says Erdrich, daughter of acclaimed writer Louise Erdrich. “I know this is just a phase of the dictionary and it’s going to continue to grow. [And] I think that being able to hear the speakers is going to help us preserve the way that it should be spoken.

“… A lot of the university teachers are second-language learners, so to be able to have the audio part is important to the whole project and to keeping the language alive.”

Erdrich beams a broad smile when she talks about what the online dictionary means for her own education, beyond the classroom.

“For me, learning Ojibwe is so personal, and this dictionary is so exciting,” Erdrich says. “I’ll be graduating this May, and thinking about not having my classes I worry about, ‘How will I keep learning?’ I get to spend a lot of time with the elders and that’s really helpful. … And now with this dictionary, I’ll get to visit with them and they’ll get to tell me how to pronounce words, day and night.”