Martin Gartzman sat in his dentist’s waiting room last fall when he read a study in Education Next that nearly brought him to tears.

A decade ago, in his former position as chief math and science officer for Chicago Public Schools, Gartzman spearheaded an attempt to decrease ninth-grade algebra failure rates, an issue he calls “an incredibly vexing problem.” His idea was to provide extra time for struggling students by having them take two consecutive periods of algebra.

Gartzman had been under the impression that the double-dose algebra program he had instituted had only marginal results, but the study he read indicated otherwise.

“We find positive and substantial longer-run impacts of double-dose algebra on college entrance exam scores, high school graduation rates and college enrollment rates, suggesting that the policy had significant benefits that were not easily observable in the first couple of years of its existence,” wrote the article’s authors.

As executive director of the University of Chicago’s Center for Elementary Mathematics and Science Education, Gartzman oversees a research and development enterprise dedicated to improving math and science education in primary and secondary schools. The center is especially well-known for being the institutional home of the authors of Everyday Mathematics, a pre-K through sixth-grade curriculum that serves 4.3 million students annually in 220,000 classrooms nationwide.

In high schools, ninth-grade algebra is typically the class with the highest failure rate. This presents a barrier to graduation, because high schools usually require three to four years of math to graduate.

Students have about a 20 percent chance of passing the next math level if they don’t first pass algebra, Gartzman said, versus 80 percent for those who do pass. The data are clear: If students fail ninth-grade algebra, the likelihood of passing later years of math, and ultimately of graduating, is slim.

This entrenched problem has attracted widespread attention: A New York Times editorial last July called for the removal of the algebra requirement from high schools altogether. “People have been grasping at straws,” Gartzman said. 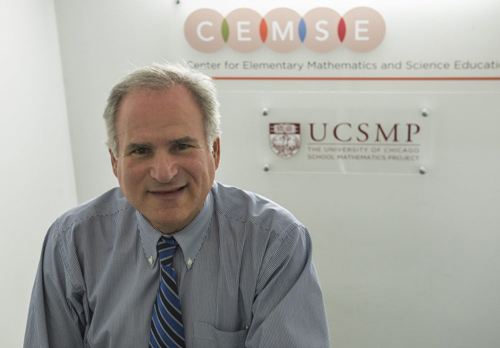 Gartzman’s work to decrease algebra failure rates at CPS was motivated by a study of Melissa Roderick, the Hermon Dunlap Smith Professor at UChicago’s School of Social Service Administration. The study emphasized the importance of keeping students academically on track in their freshman year to increase the graduation rate.

Some administrators and teachers resisted the new policy. Teachers called these sessions “double-period hell” because they gathered, in one class, the most unmotivated students who had the biggest problems with math.

Principals and counselors sometimes saw the double periods as punishment for the students, depriving them of courses they may have enjoyed taking and replacing them with courses they disliked.

It seemed to Gartzman that double-period students were learning more math, though he had no supporting data. He gauged students’ progress by class grades, not by standardized tests. The CPS educators had no way of fully assessing their double-period idea. All they knew was that failure rates didn’t budge.

Gartzman took a new position in 2006 as assistant vice chancellor for high school development at the University of Illinois at Chicago, with what he regarded as unfinished business at CPS. “We had not made the progress with the underprepared students or with the double-period classes that I had hoped would happen.” He has continued his work with this issue, spearheading a National Science Foundation-funded project to develop new instructional materials for the double-period classes.

Gartzman later learned that two educational researchers were studying CPS’s double-dose algebra program. One of these researchers was Takako Nomi, an affiliated researcher at UChicago’s Consortium on Chicago School Research, also an assistant professor of education at St. Louis University.

Nomi and Elaine Allensworth, interim director of UChicago CCSR, tracked students immediately above and below the cutoff score for placement into the double periods. They found that students above the cutoff failed at slightly higher rates than in previous years, but that students in double-period sections scored better on standardized tests.

“Double-dosing had an immediate impact on student performance in algebra, increasing the proportion of students earning at least a B by 9.4 percentage points, or more than 65 percent,” noted the Education Next article. Although ninth-grade algebra passing rates remained mostly unaffected, “The mean GPA across all math courses taken after freshman year increased by 0.14 grade points on a 4.0 scale.”

They also found significantly increased graduation rates. The researchers concluded on an encouraging note: “Although the intervention was not particularly effective for the average affected student, the fact that it improved high school graduation and college enrollment rates for even a subset of low-performing and at-risk students is extraordinarily promising when targeted at the appropriate students.”

Gartzman recalled that reading the article “was mind-blowing for me. I had no idea that the researchers were continuing to study these kids.”

The study had followed a set of students from eighth grade through graduation, while Gartzman’s team could only follow them for a year after the program began. The improvements appeared five years after launching double-dose algebra, hiding them from the CPS team, which had focused on short-term student performance.

Gartzman stressed the importance of education policy research. “Nomi and Allensworth did some really sophisticated modeling that only researchers could do, that school districts really can’t do. It validates school districts all over the country who had been investing in double-period strategies.”

Gartzman notes, with a tinge of regret, that he wishes he had these results while still working at CPS. But he’s hopeful that this research marks a step toward effective education reform.