When automotive engineers want to create a new car, they don’t build thousands of prototypes. Instead, they create computer models and run simulations for performance, efficiency and desirability before a model is selected for fabrication.

University of Delaware materials science professors Darrin Pochan and Kristi Kiick are taking a similar approach to building new nanomaterials from biomolecules — namely peptides and proteins — that could increase the efficiency of photovoltaics, also known as solar cells, and other electronic devices.

Collaborating with Jeffrey Saven, professor of physical and biological chemistry at the University of Pennsylvania, Pochan and Kiick are working to develop useful protein-like molecules that can easily be scaled up into complicated nanomaterials for industrial applications.

“There is a lot of power in protein molecules. Proteins are what make humans function. We want to harness that functionality for non-biological materials applications,” explained Pochan, principal investigator on the project.

The work is funded through a four-year, $1 million grant from the National Science Foundation’s (NSF) Foundation Division of Materials Research. It parallels efforts by the Materials Genome Initiative to accelerate how transformative materials technology moves from research to production. 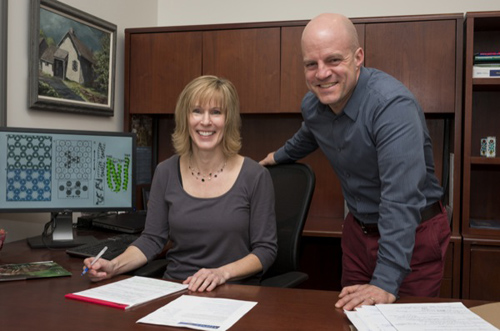 According to Pochan, many engineers have attempted to harness the functionality of biomolecules to make materials, mostly by using “bio-inspired” ideas. The key difference in this new project is the opportunity to capitalize on the inherent chemistry and shape of proteins to organize new, designed molecules into desired, arbitrary structures.

A large part of the research is defining how the molecules come together, or assemble, in solution to form a desired material. Pochan and Kiick will collaborate with Saven to design, model and simulate thousands of molecules to determine which will deliver a designed material structure and functionality.

“Up until now, people have mostly copied molecules and materials in nature. What we’ve done is decide what type of non-natural material structure we want to make, and now with Saven and his students, we are predicting what molecules are needed to make that happen,” Pochan added.

Once the molecular details are determined, the team will synthesize the protein molecules in the laboratory and then identify the best conditions for assembling the molecules into the desired nanostructures in water. The work also includes characterizing the constructed materials and comparing them with the original design.

This is because proteins can be engineered to display chemically reactive groups at desired positions. By constructing a nanomaterial with proteins, researchers can subsequently add inorganic nanoparticles that will “stick” to the nanomaterial surface in targeted locations.

If successful, Pochan says the project could offer manufacturers a “dirt simple” processing and materials technique for creating a structured, protein-based backing that could be applied to photovoltaic devices to improve their efficiency.

It may also create new opportunities to work with colleagues in energy disciplines — particularly those at UD — to test and refine the materials process.

Undergraduate and graduate students, as well as post-doctoral researchers involved in the project, will gain multidisciplinary expertise in the design, modeling, fabrication and characterization of peptide-based biomaterials.

“This type of project requires a seamless integration of theory, synthesis and characterization, with an interdisciplinary team capable of moving basic research into the practical realm,” said Kiick, who is also deputy dean of the College of Engineering.

Darrin Pochan is a professor of materials science and engineering with secondary appointments in chemistry and biochemistry and biomedical engineering at UD and principal investigator on the grant. His expertise lies in developing new nanostructures and soft materials through the assembly polymers and proteins.

Kristi Kiick, professor of materials science and engineering and biomedical engineering, specializes in the synthesis and assembly of biologically-derived macromolecules. A leader in the medical and bioengineering community, she is an internationally known scholar in the area of biomaterials design, synthesis and characterization.

Jeffrey Saven is a professor of physical and biological chemistry at University of Pennsylvania. His expertise lies in the use of theory and computation to study biomolecules, polymers and condensed phase systems.