ANN ARBOR — Charles Darwin noted more than 150 years ago that animals on the Galapagos Islands, including finches and marine iguanas, were more docile than mainland creatures. He attributed this tameness to the fact that there are fewer predators on remote islands.

While “island tameness” is an old idea, there have been few rigorous studies of the phenomenon. Many aspects remain unclear, including the mechanisms behind it and the speed at which it evolves in island populations.

A new University of Michigan-led study of Aegean wall lizard populations on 37 Greek islands shows that island tameness is determined by both the diversity of the local predator populations and the length of time an island has been separated from the mainland. 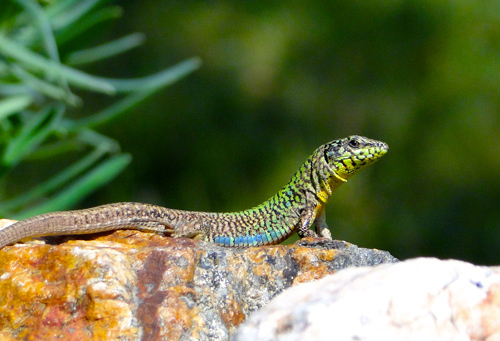 The researchers found that as the diversity of predators on an island increases, so does the distance at which these small lizards start to flee when they are approached — an anti-predator response which scientists call the flight initiation distance. In addition, they found that the longer an island has been isolated from the mainland, on average, the longer its resident Aegean wall lizards will wait before fleeing from a predator.

The results suggest that animals living on small, long-isolated islands face the greatest risk from introduced predators — such as feral cats and rats — and should therefore receive priority in conservation efforts, said U-M vertebrate ecologist Johannes Foufopoulos, co-author of a paper published online in the journal Evolution on Dec. 1.

“Being so fearless, these populations are extremely susceptible to any novel predator that’s introduced. In fact, island tameness has caused numerous island-species extinctions at the hands of human-introduced predators and pets,” said Foufopoulos, an associate professor at the U-M School of Natural Resources and Environment.

“Determining what factors lead to the loss of effective anti-predator responses is critical because it provides a fundamental understanding of evolutionary processes on islands and also helps conservation managers predict which island species are at most risk,” he said. 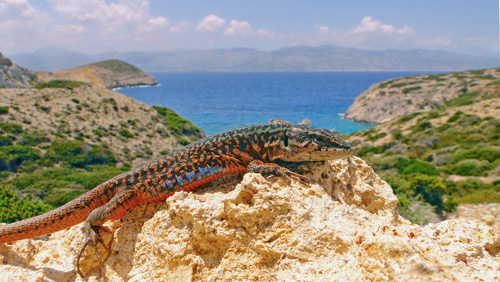 The first author of the Evolution paper is Kinsey M. Brock, who conducted the lizard study for her graduate thesis at the School of Natural Resources and Environment. “This is the first study to systematically test for the ecological factors that drive island tameness and the rate at which it can occur,” she said.

The study compared anti-predator responses of Aegean wall lizard populations on the Cyclades Islands in the central Aegean Sea to the composition of the predator communities and the isolation history of each island.

Bathymetric data derived from navigation charts, targeted sonar measurements, and geomorphological reconstructions of past sea levels were used to determine how long each island has been separated from the Greek mainland. Some of the oldest islands have been cut off from the mainland for more than 450,000 years.

The researchers looked at how skittish the lizards were by measuring flight initiation distance, and they examined the likelihood that lizards will shed their tails by gently squeezing lizard tails between calipers in the laboratory. Tail-shedding, also know as tail autotomy, is a common but energetically costly anti-predator defense among lizards, who jettison the wriggling appendage when attacked and later grow a new tail.

Both the fear response and the propensity for tail-shedding were strongly associated with predator diversity on an island: The fewer predators present, the longer the lizards wait to flee and the weaker their tail-shedding ability.

“It would be evolutionary disadvantageous to shed your tail in a predator-free environment, as the fitness costs range from lowered social status to reduced locomotor ability and susceptibility to parasites,” Brock said.

The study showed that not all predators were equally important in shaping behavior. Fast-moving predators, such as mammals and hawks, were much more influential than sit-and-wait predators, such as vipers, in driving the evolution of shy, flighty lizards.

“This makes sense, as shyness is going to be a much less effective response against sit-and-wait predators that remain hidden until the prey is within striking distance,” Foufopoulos said.
The researchers also found that because larger islands tend to support more diverse predator populations, anti-predator responses were most dramatically lost on small, predator-poor islets. And lizards on the oldest islands tended to be the most fearless.

“In summary, our results indicate that loss of anti-predator defenses is a serious problem for island organisms and suggest that small, long-isolated island populations stand at the highest risk from invasive predators and, as such, should receive priority in conservation efforts,” Brock said.

The other authors of the Evolution paper are Peter Bednekoff of Eastern Michigan University and Panayiotis Pafilis of the University of Athens. The title of the paper is “Evolution of antipredator behavior in an island lizard species Podarcis erhardii (Reptilia: Lacertidae): the sum of all fears?”

The study received financial support from the School of Natural Resources and Environment, the U-M Museum of Zoology, the U-M International Institute and the SNRE Envoys.