Poverty Grows in Suburbs, But Social Services Don’t Keep Up

Poverty has grown in America’s suburbs during the recent economic downturn, but poor people in many suburban communities are finding it hard to get the help they need, a report by University of Chicago researchers shows.

“Many suburbs have seen significant expansion in the number of poor persons over the last several years, yet few of the suburban communities have a social services infrastructure in place to address the challenges this increased poverty poses,” said Scott Allard, Associate Professor in the School of Social Service Administration at the University.

Allard and Benjamin Roth, a graduate student at SSA, are the authors of a report, “Suburbs in Need: Rising Suburban Poverty and Challenges for Suburban Safety Nets,” prepared for the Brookings Institution, to be released Thursday, Oct. 7. For the study, the researchers examined census data, records from the Internal Revenue Service and interviewed representatives of social service agencies in suburban Chicago, Los Angeles and Washington, D.C. 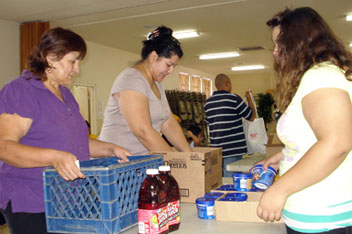 The authors focused on these specific metropolitan areas because they provide a diverse set of suburban communities with different levels of poverty and social service support. Focusing on three metro areas also allowed the authors to follow a large set of nonprofit service providers over the course of a year. The experiences of low-income people in the suburbs of these three metro areas are quite similar to the experiences of low-income people in other suburban areas across the country, Allard said.

The study is one of the first comprehensive looks at suburban safety nets and poverty during the recession. The majority of poverty research focuses on concentrated urban poverty.

As in the city, poverty also is concentrated in certain areas of the suburbs, with some communities having high concentrations of poverty while nearby communities are more affluent. Suburbs also vary greatly in their number of immigrants and minority populations. For example, while several suburban Los Angeles municipalities are predominantly Hispanic and a handful of Chicago suburbs have sizeable Hispanic populations, many Washington, D.C. suburbs have substantial black and Asian populations as well.

Although the collapse of the housing market and high unemployment are driving demand for help, many of the people seeking assistance have jobs. They are among the working poor who have seen their hours and earnings cut in the last few years. “Forty-five percent of providers report substantial increases in the number of clients coming from households where one or both adults are working but cannot earn enough to make ends meet,” Allard said.

The researchers also found that a major impact of the ­Great Recession has been an increase in the number of people coming, for the first time, to seek help from social service agencies. “Almost three-quarters of suburban nonprofits are seeing more clients with no previous connection to safety net programs,” Allard said.

The social service agencies, which provide emergency food and housing relief, job training, help with health care and other assistance to low-income populations, were often not well-positioned to respond to the increase in poverty, the report showed.

“Suburban safety nets rely on relatively few social service organizations, and those few organizations tend to stretch operations across much larger service delivery areas than their urban counterparts,” Allard said. The study found that 60 percent of the agencies administered programs in more than one community, which led to fragmentation in the services that agencies could provide because they had to deal with different sets of municipal leaders.

A major problem for social service providers has been low funding, and that will continue as the economy slowly recovers. Both California and Illinois have massive deficits that limit the prospect for state support of social service agencies. Additionally, philanthropic support has declined, Allard said.

“Almost half of suburban nonprofits surveyed reported a loss in a key revenue source last year, with more funding cuts anticipated in the year to come. Nearly 30 percent nonprofits have laid off full-time and part-time staff,” Allard said. As a result, the poor are put on waiting lists for the help they need.

Despite such challenges, the work of nonprofits serving the poor in the suburbs is needed now more than before, and deserves support, Allard said.