UMD and UMass Chemists Design Cloaked, Anti-Cancer Toxin to Kill Tumors from Within

COLLEGE PARK, Md. — A research team including University of Maryland chemistry and biochemistry Professor Lyle Isaacs and University of Massachusetts Amherst chemist Vincent Rotello has demonstrated that they can deliver a dormant toxin into a specific site such as a tumor for anti-cancer therapy, then chemically trigger the toxin to de-cloak and attack from within. It holds promise as a complex and sophisticated synthetic, therapeutic drug delivery system for living cells.

A paper describing the new host-guest chemistry approach by Rotello, Isaacs and colleagues, appears in the current issue of Nature Chemistry.

As Rotello explains, ”Supramolecular chemistry focuses on understanding what forces make molecules stick together, and using these forces to control the assembly of functional systems. This assembly process is much like Lego blocks, where bumps and dimples interact to hold biomolecules like DNA and proteins together.” 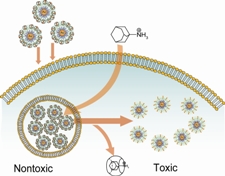 About the Image: The image shows cellular uptake of cloaked gold (Au) nanoparticle-curcurbituril complexes and activation of toxicity by NH3 molecules inside the cell. Image credit: Graphic courtesy of Vincent Rotello, UMass Amherst.

Specifically, Rotello and colleagues covered specialized gold nanoparticles with ligand or binding molecules (the bump) that made the particles toxic. These ligands, however, also can strongly bind to a hollow, bowl-shaped molecule (the dimple to which the bump sticks) called a cucurbituril that can make the particle non-toxic.

Lyle Isaacs’ research group has been studying these cucurbituril molecular containers for a long time to understand the basic science processes that govern a compound going inside the containers. In 2007, he and his research team made a breakthrough in creating stronger synthetic molecular containers that hold onto their cargo very tightly. Isaacs and Rotello designed this study utilizing the containers that Isaacs developed to take advantage of their unique properties that rival characteristics seen in natural systems.

“Normally, containers can’t hold onto their cargo very well in water and they fall apart. Because the cucurbituril containers hold onto ligands very strongly, it allows them to operate in a fluid, biological system. They hold on with a strong affinity, like an antibody holding onto antigen,” Isaacs explains.

This insures that when the gold nanoparticles are introduced into living cells, they lie dormant until triggered to act. The researchers use another molecule that binds strongly to the dimple-shaped cucurbiturils, pulling them away from the gold nanoparticle so it becomes uncloaked and toxic.

“This triggered toxicity opens up new directions for controlled chemotherapeutics, where toxicity can be tuned by and directed through choice and amount of added activator,” Rotello says. They would be capable of achieving higher levels of site-specific activity with reduced collateral damage to surrounding healthy cells.

His research group is currently exploring this strategy in cells and will be moving into vivo systems soon to thoroughly explore issues related to real-world application of the system.