Decades of research into how much plastic litters the sea may have only skimmed the surface. A new study reveals that wind drives confetti-sized pieces of plastic debris deeper underwater than previously believed, more than doubling earlier estimates of the pollutant’s presence in oceans.

“In windy conditions the traditional approach to measuring plastic marine debris captures only a small fraction of plastic pieces,” said Tobias Kukulka, assistant professor of physical ocean science and engineering in the University of Delaware’s College of Earth, Ocean, and Environment. “Our study helps to better understand how much plastic there is and where, as well as the complexity of the ocean dynamics at work.”

Reporting in Geophysical Research Letters last month, Kukulka and co-lead author Giora Proskurowski of the University of Washington said that data collected from just the surface of the water commonly underestimates the total amount of plastic in the water by an average factor of 2.5. In high winds the volume of plastic could be underestimated by a factor of 27.

Researchers have found that small particles of plastic are churned further underwater by wind than previously estimated.

The paper detailed a new model that researchers and environmental groups can use to collect more accurate data in the future.

“The basic idea is that if the water is still, plastic pieces drift upward due to their buoyancy and, after some time, you would expect all plastic pieces to surface,” Kukulka said. “In a wind-driven turbulent ocean, however, this buoyant upward movement is balanced by a downward transport because plastic particles ‘catch a ride’ with the turbulent motion. Thus, these buoyant particles can be found not just at the surface, but also at greater depths.”

Descriptions of the so-called great Pacific garbage patch in widespread news reports may have led many people to imagine a giant, dense island of garbage while in fact the patch is made up of widely dispersed, millimeter-size pieces of debris. This waste is a concern because of the impact it might have on the environment.

For instance, when fish ingest the plastics, it may degrade their liver functions. The particles also make nice homes for bacteria and algae, which are then transported along with the particles into different regions of the ocean where they may become invasive and cause problems. 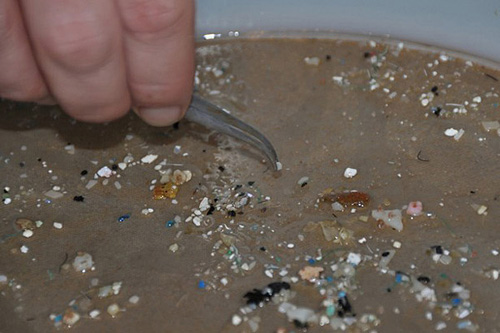 Researchers have found that small particles of plastic are churned further underwater by wind than previously estimated. Photo by Sea Education Association

Proskurowski gathered data during a 2010 North Atlantic expedition where he and his team collected samples at the surface and at depths down to 100 feet.

“Almost every tow we did contained plastic regardless of the depth,” he said.

By combining the data with wind measurements, the researchers developed a simplified mathematical model that could potentially be used to match historical weather data, collected by satellite, with previous surface sampling to more accurately estimate the amount of plastic in the oceans. The team plans to publish a “recipe” that simplifies the model so that a wide range of groups investigating ocean plastics, including those that aren’t oceanographers, can easily use the model.

Next Kukulka and his team are working on simulating plastic particle motion based on fully three-dimensional ocean turbulence.

“One challenge is that we need to better understand the physical properties of the plastic pieces that influence the rise speeds,” Kukulka said. “We are also working on getting the effects of surface gravity waves right, which enhance upper ocean turbulence.” 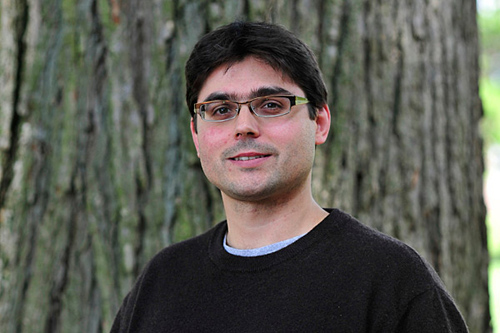 Other co-authors of the paper are Kara Lavendar Law and Skye Morét-Ferguson of Sea Education Association and Dylan Meyer, an undergraduate student from Eckerd College.

Support for the project came from National Oceanic and Atmospheric Administration and UD’s School of Marine Science and Policy.

The researchers relied on data collected by students participating in the Sea Education Association’s Plastics at SEA program.

– Article by Teresa Messmore, with material adapted from the University of Washington