One of the most enduring mysteries in solar physics is why the Sun’s outer atmosphere, or corona, is millions of degrees hotter than its surface.

Now scientists believe they have discovered a major source of hot gas that replenishes the corona: jets of plasma shooting up from just above the Sun’s surface.

The finding addresses a fundamental question in astrophysics: how energy is moved from the Sun’s interior to create its hot outer atmosphere.

“It’s always been quite a puzzle to figure out why the Sun’s atmosphere is hotter than its surface,” says Scott McIntosh, a solar physicist at the High Altitude Observatory of the National Center for Atmospheric Research (NCAR) in Boulder, Colo., who was involved in the study.

“By identifying that these jets insert heated plasma into the Sun’s outer atmosphere, we can gain a much greater understanding of that region and possibly improve our knowledge of the Sun’s subtle influence on the Earth’s upper atmosphere.”

The research, results of which are published in the journal Science, was conducted by scientists from Lockheed Martin’s Solar and Astrophysics Laboratory (LMSAL), NCAR, and the University of Oslo. It was supported by NASA and the National Science Foundation (NSF), NCAR’s sponsor.

“These observations are a significant step in understanding observed temperatures in the solar corona,” says Rich Behnke of NSF’s Division of Atmospheric and Geospace Sciences, which funded the research.

“They provide new insight about the energy output of the Sun and other stars. The results are also a great example of the power of collaboration among university, private industry and government scientists and organizations.” 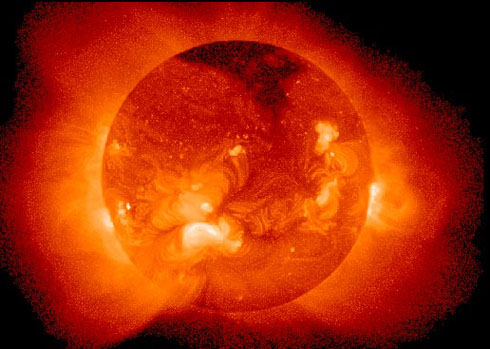 Jets of plasma from just above the Sun's surface likely replenish its corona. Image credit: NASA

The research team focused on jets of plasma known as spicules, which are fountains of plasma propelled upward from near the surface of the Sun into the outer atmosphere.

For decades scientists believed spicules could send heat into the corona. However, following observational research in the 1980s, it was found that spicule plasma did not reach coronal temperatures, and so the theory largely fell out of vogue.

“Heating of spicules to millions of degrees has never been directly observed, so their role in coronal heating had been dismissed as unlikely,” says Bart De Pontieu, the lead researcher and a solar physicist at LMSAL.

In 2007, De Pontieu, McIntosh, and their colleagues identified a new class of spicules that moved much faster and were shorter-lived than the traditional spicules. 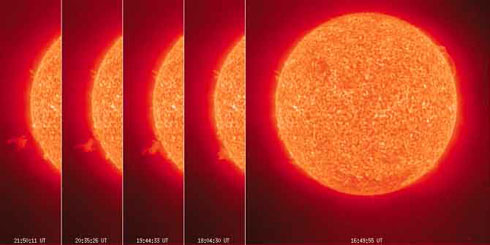 The Sun's outer atmosphere, or corona, is millions of degrees hotter than its surface. Image credit: NASA

These “Type II” spicules shoot upward at high speeds, often in excess of 100 kilometers per second, before disappearing.

The rapid disappearance of these jets suggested that the plasma they carried might get very hot, but direct observational evidence of this process was missing.

“The high spatial and temporal resolution of the newer instruments was crucial in revealing this previously hidden coronal mass supply,” says McIntosh. 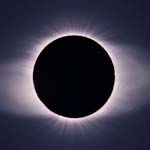 “Our observations reveal, for the first time, the one-to-one connection between plasma that is heated to millions of degrees and the spicules that insert this plasma into the corona.”

The findings provide an observational challenge to the existing theories of coronal heating.

During the past few decades, scientists proposed a wide variety of theoretical models, but the lack of detailed observation significantly hampered progress.

“One of our biggest challenges is to understand what drives and heats the material in the spicules,” says De Pontieu.

A key step, according to De Pontieu, will be to better understand the interface region between the Sun’s visible surface, or photosphere, and its corona.

Another NASA mission, the Interface Region Imaging Spectrograph (IRIS), is scheduled for launch in 2012 to provide high-fidelity data on the complex processes and enormous contrasts of density, temperature and magnetic field between the photosphere and corona. Researchers hope this will reveal more about the spicule heating and launch mechanism.

The LMSAL is part of the Lockheed Martin Space Systems Company, which designs and develops, tests, manufactures and operates a full spectrum of advanced-technology systems for national security and military, civil government and commercial customers.