ANN ARBOR, Mich.—Pilots and dentists have more in common than one might think: Both jobs are highly technical and require teamwork. Both are subject to human error where small, individual mistakes may lead to catastrophe if not addressed early.

A dental professor at the University of Michigan and two pilot-dentists believe that implementing a checklist of safety procedures in dental offices similar to procedures used in airlines would drastically reduce human errors. 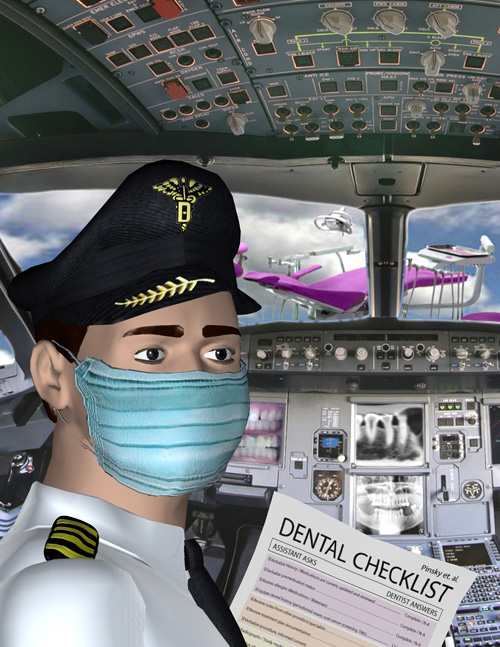 About the image: Illustration by Maria Gunnes Sibbel, University of Michigan.

Airlines implemented CRM about 30 years ago after recognizing that most accidents resulted from human error, said co-author Harold Pinsky, a full-time airline pilot and practicing general dentist who did additional training at U-M dental school.

“Using checklists makes for a safer, more standardized routine of dental surgery in my practice,” said David Sarment, a third co-author on the paper. Sarment was on the U-M dental faculty full-time before leaving for private practice. He is also a pilot and was taught to fly by Pinsky.

CRM checklists in the dentist’s office represent a major culture shift that will be slow to catch on, but Pinsky thinks it’s inevitable.

“It’s about communication,” Pinsky said. “If I’m doing a restoration and my assistant sees saliva leaking, in the old days the assistant would think to themselves, ‘The doctor is king, he or she must know what’s going on.'” But if all team members have a CRM checklist, the assistant is empowered to tell the doctor if there is a problem. “Instead of the doctor saying, ‘Don’t ever embarrass me in front of a patient again,’ they’ll say, ‘Thanks for telling me.'”

At each of the five stages of the dental visit, the dental team is responsible for checking safety items off a codified list before proceeding. Pinsky said that while he expects each checklist to look different for each office, the important thing is to have the standards in place.

For the next step, the co-authors hope to design a small clinical trial in the dental school to test CRM, Taichman said.